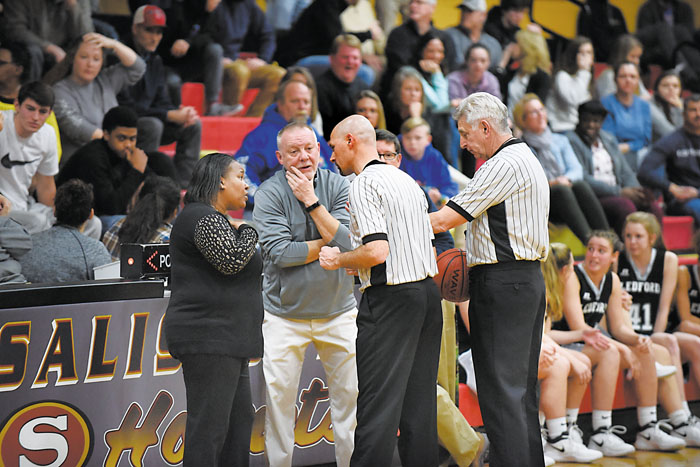 SALISBURY — Busy night for all involved in the Salisbury-Ledford girls basketball game on Tuesday.

The local police stayed busy, escorting unruly spectators from the premises. The referees occupied themselves issuing technical fouls (6) and ejecting players (4), most of which stemmed from a last-minute ruckus. But most importantly, the Hornets kept their focus on the prize at hand — a 61-53 victory that put them in the Central Carolina Conference driver’s seat.

“I feel good about having a lead in the conference,” coach Lakai Brice said after Salisbury (18-2, 14-1) beat second-place Ledford (15-4, 13-2) for the second time. “I just hate that it ended that way because it was such a great game. For it to end that way — and you lose players in a situation like that — is sad. It got emotional. They were all competing. Competitors compete.”

Salisbury starters Maria Capito and Tacorra Robinson were both disqualified for fighting, following an on-court commotion with SHS ahead, 56-50, and 39.8 seconds remaining in the fourth quarter. Ledford’s Ashley Anthony and McCall Denny were also DQ’d for fighting, meaning all four players will likely serve suspensions. Denny was also given a technical for inappropriate language. The calls were made less than a minute after Ledford coach Chris Doby was issued a tech for directing a profane comment at an official.

“They fought hard, just like we did,” Salisbury guard Anayia Fulson said after contributing 23 points and 14 rebounds. “It was a tough game.”

Doby elected not to discuss the incident after the Panthers suffered their first road loss and had a six-game winning streak snapped.

“Both teams played hard,” he spewed while hurrying for the team bus. “They got hot at the right time. Somebody had to lose — and I’m sorry it was us.”

Junior Bryanna Troutman had 19 points and 10 rebounds for Salisbury, winner of eight straight games. Elusive guard Lyrik Thorne topped all scorers with 26 points for Ledford, which opened an 18-9 first-period lead and went up 27-17 when Anthony made the second of two free throws with 1:30 remaining in the first half.

“We were rushing in the first half,” said Troutman, the county’s third-leading scorer with a 16.7 points-per-game average. “And our defense wasn’t that good. In the second half we knew we needed to kick it up because we’re going for a championship.”

They looked the part, beginning late in the first half when Troutman twisted in from the right side for a layup and Fulson sank four free throws to trim Salisbury’s deficit to 27-23 at the half. When instant-energy reserve Lexi May canned a 3-pointer with 1:48 to go in the third quarter, the Hornets were within 35-34.

“We just kept fighting back,” Brice said. “Because we had to. We may have panicked a little in the first half. We weren’t playing our game.”

Salisbury took its first lead, 38-37, when Fulson took a kick-out pass from Capito and beamed in a 3-ball from the top of the wheel with 15 seconds to play in the third period.

“I don’t really have the green light to shoot that,” Fulson said. “But I knew that was my spot and let it go.”

The long-distance connection unlatched the gates for Salisbury, which used a 13-0 scoring spurt to move ahead 47-37 with about five minutes left. And even after Ledford scored eight straight points and inched within 50-47 on Emma O’Toole’s stickback in the waning moments, the Hornets stayed focused. Fulson — who went 12-for-14 from the free throw line — made five of six in a 10-second span to restore an eight-point advantage. Then came the late-game distraction, which stopped the contest for 10 minutes.

“I think we were getting them frustrated,” Troutman said. “That just got us hyped and we fed off of it.”

It was an unfortunate finish to a well-played game.

“I’ve been waiting all season for these girls to play like this,” Brice said. “They came out and played hard.”