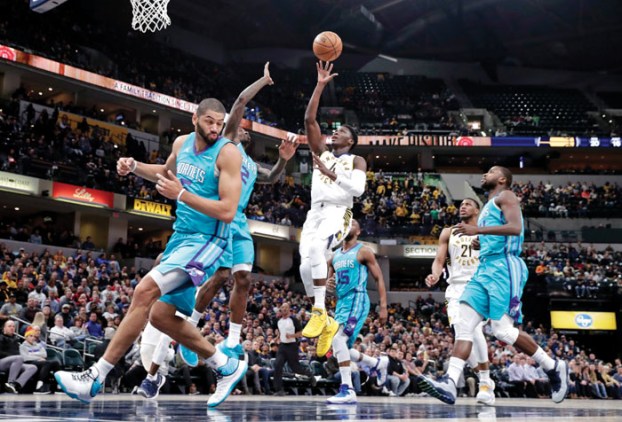 Pacers find enough energy late to pull away from Hornets

Turn up the defensive intensity and share the ball.

The combination worked perfectly. Victor Oladipo scored 25 points, Myles Turner added 22 and the Pacers had just enough energy to make two late charges in a 105-96 victory over the Charlotte Hornets.

“Everybody contributed,” Oladipo said. “It’s a collective team thing. We had to do a great job of playing team defense, making them work — I think we did a great job of that tonight.”

Whether it was fatigue from playing their fourth game in six nights or the Hornets’ slower, half-court style, the Pacers didn’t look like themselves most of the night.

For more than three quarters, their preferred up-tempo style slowed down and their energy level seemed to be low.

All that changed in the fourth quarter when everyone started playing their part.

Six players scored in double figures, including Thaddeus Young with 16 points and Darren Collison with 13. Domantas Sabonis had his 12th double-double this season with 11 points and 10 rebounds. Collison had six assists, backup point guard Cory Joseph added five and, of course, Lance Stephenson provided a late burst of energy as he wound up with 10 points.

The result: Indiana won its second straight and fourth in five games.

“We finally found our groove in the fourth and wore them down,” Young said. “Defensively, we got into them more, pushed up on the ball, got a few steals, forced them into some bad shots and just played with a lot of energy and passion.”

Charlotte scored only 14 points over the final 10 minutes and 18 in the fourth quarter, losing its second in a row.

Kemba Walker led the Hornets with 23 points, making a trio of 3-pointers. Dwight Howard had 22 points and 11 rebounds but took only three shots in the second half. Nicolas Batum made five 3s and scored 22 points.

After Oladipo made a 19-footer with 9:50 to go, the Pacers didn’t look back. Sabonis scored Indiana’s next five points and when the 13-4 spurt ended with Sabonis’ 20-footer, the Pacers led 94-86 with six minutes remaining.

Hornets: Howard dominated the first half, scoring 18 points on 8-of-11 shooting and grabbing seven rebounds. He wound up with the 697th double-double of his career. … The Hornets were outscored 40-21 off the bench and were just 9 of 31 on 3s. They also had 16 turnovers. … Charlotte has lost three straight and 14 of its last 16 in Indianapolis.

Pacers: Young has scored in double figures in 12 consecutive games. … Indiana shot 54.2 percent from the field and improved to 18-0 when shooting 50 percent or better this season. … The Pacers had a 54-42 scoring advantage in the paint. Neither team led by more than six through the first three quarters.

Turner looked more comfortable Monday with a brace on his injured right elbow.

The numbers reflected it, too. He was 8 of 11 from the field, 4 of 6 on 3s, and had four rebounds and one block in his second game back. He missed the previous eight.

“I just played,” he said, noting he didn’t get much of a chance Saturday because of foul trouble.

Batum also acknowledged he’s rounding into form, too, after missing the first 12 games with a torn ligament in his left elbow.

“Injuries have been tough for me, so it feels good to be getting my shooting back,” Batum said after going 8 of 17.

Pacers: “I love playing with Domantas,” Turner said. “I almost feel bad because he does all the dirty work and it kind of just leaves the easy stuff for me.”

Hornets: At the Atlanta Hawks on Wednesday night, hoping to win their third straight in the series.

Pacers: Can sweep Memphis for the first time since 2012-13 with a win at home Wednesday night.

The sting: In a video game face-off, Hornet star beats one of his biggest fans

SALISBURY — There they were, leaning back and thumbs flying like any good friends playing a basketball video game. But... read more