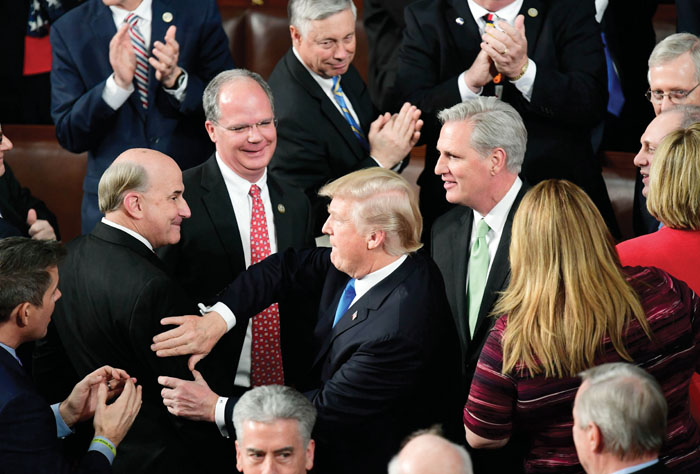 President Donald Trump greets members of Congress before his State of the Union address in January in Washington, D.C. Some members skipped the speech, though. Washington Post photo by Melina Mara

Rep. Ted Budd, R-N.C., 13th District: “The policies described in President Donald Trump’s State of the Union lay the foundation for a stronger and more secure country. In just the past year, Congress and the Trump administration have worked together to deliver a booming economy, regulatory relief for small businesses, tax cuts for the middle class, and a more constitutionally conservative judiciary. This growing list of wins for our country is a direct result of America first policies.

“This will be the first time since the turn of the century that working families see sustained gains in their wages, and thanks to the Tax Cuts and Jobs Act, over 2 million Americans have already received a bonus. In the coming year, I look forward to continuing this fight and appreciate the leadership President Trump showed in his speech tonight.”

Rep. Richard Hudson, R-N.C., 8th District: “One by one, President Donald Trump has been checking off the promises he made to the American people. We’ve seen incredible results thanks in part to our tax cuts – including hundreds of announcements for more good-paying jobs, increased wages, and new investments. But there’s still much more work to do. Tonight, the president continued to lay out a very clear vision for America’s future. I remain committed to working closely with him on this vision to put America first, rebuild our military, improve care for veterans and cut government spending.”

Sen. Richard Burr, R: “A little over one year ago, the American people voted for a change. Following eight years of abdicated global leadership and the slowest economic recovery in history, the new administration has delivered that change in spades. Our stock markets are setting records on a daily basis, ISIS is on the run, and unemployment rates are at record lows. The new president and this Congress have worked together to put first those who were left behind in recent years and, in doing so, helped the millions of Americans who needed it most.

“We confirmed a well-qualified Supreme Court justice and a record number of Circuit Court judges. We revoked hundreds of unnecessary regulations that wasted thousands of hours of paperwork better spent on further developing businesses. We repealed the burdensome individual mandate from Obamacare. And we passed the most sweeping tax reform in more than 30 years, putting more of your hard earned money back in your pockets.

“You would be hard pressed to find someone who hasn’t seen the benefits from all that’s been done in just the first year of this administration. I look forward to continuing to work together with the president and my colleagues in Congress to accomplish even more for the American people in 2018.”

Sen. Thom Tillis, R: “I was encouraged to hear President Trump speak about immigration and challenging Congress to fix a problem that has existed for decades.

“The White House released an immigration framework last week, and I believe it is a reasonable proposal.  The framework offers solutions supported by both parties and the American people.  Securing our borders, providing long-term certainty for DACA-eligible youth, and transforming our legal immigration system.

“Last year, I introduced the SUCCEED Act, a fair, merit-based solution that allows the DACA-eligible population to earn and keep legal status as long as they work hard, get an education, give back to society, pay their taxes, and follow the law.

“Since I introduced the SUCCEED Act, I’ve been working with Republican and Democrat senators to produce a solution that encompasses border security and a long-term solution for the DACA-eligible population.  Under the president’s leadership, I believe we are getting closer every day to reaching a deal.

“It is time for Congress to take up the president’s challenge.  We must come together in a bipartisan fashion and finally pass a responsible and compassionate bill.

“Under President Trump’s leadership, we have made great progress in realizing the economic potential of the United States. Sweeping regulatory reform has eliminated job-killing regulatory burdens and tax cuts have provided relief to working families and businesses.

“The tax cut will leave more of your hard-earned money in your pocket, not the government’s. By doubling the standard deduction and lowering the tax brackets, American families will get the tax relief they have long waited for.

“During President Trump’s first year in office, Americans are getting back to work and the economy is on the rise.  Unemployment is at a 17-year low, with nearly 2 million jobs created. The stock market is up 36 percent, and consumer confidence remains at historically high levels.

“American families are once again on track to realizing our economic potential and American companies are globally competitive again. Over the past month, businesses have announced bonuses and pay increases for millions of Americans and they plan to invest billions of dollars in the American economy.

“Although some of my colleagues on the other side of the aisle are downplaying these effects, these announcements were not a coincidence: They were a direct result of the president’s leadership and Congress’ actions.”