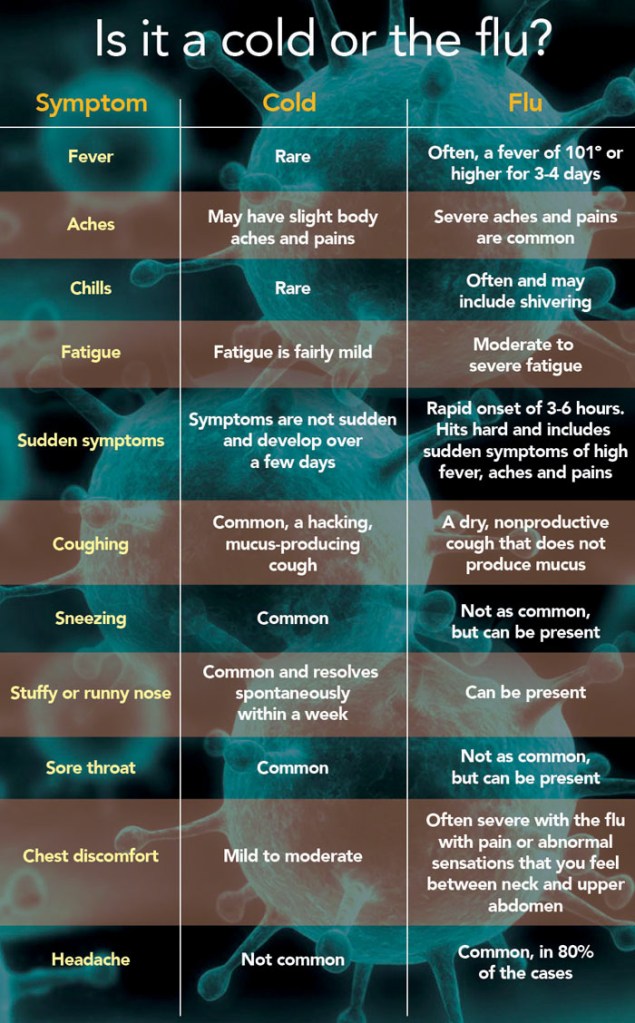 SALISBURY — Rowan County, like the entire country, is experiencing high flu-like activity, and local health officials say getting the flu vaccine is still a good idea.

“The common misconception is the flu vaccine and Tamiflu will prevent the flu. They do not stop you from getting the flu. The flu shot does decrease symptoms and is 40 to 60 percent effective. This doesn’t mean they should not get it,” said Dr. John Bream, director of the Emergency Department at Novant Health Rowan Medical Center.

Officials say that’s a more than 700 percent increase from the 2016-17 flu season. The numbers only include the hospital and not confirmed flu cases for Novant Health Urgent Care in Salisbury or physicians’ offices.

“This year’s flu season has been really bad. It’s much more deadly and prevalent as past years,” Bream said.

Anyone who has symptoms or fever that lasts more than a week or who has weakness and can’t move his neck should come into the ER, he advised.

The fever and body aches part of the flu generally last three to five days. After that, patients will still feel run down for a week or two.

Bream said flu is always around throughout the year.

Flu season in the Southern United States starts in early to mid-December and lasts until the beginning of March. The peak of flu season is January and February.

The hospital typically doesn’t test patients for flu because “if you come in during flu season with flu-like symptoms, then you have the flu,” Bream said.

Doctors could write a prescription for stronger cough medicines or administer Tamiflu if a patient is a candidate.

Bream said Novant will see any patient who comes through the door and the staff will do its best to see a patient as quickly as possible. Patients also can go to their primary physician or an urgent care center.

He said the emergency room is more for people with complications, including shortness of breath.

Children with asthma are more susceptible to flu complications because of their underlying lung problems.

She said this year, the department is enrolled in the Influenza Sentinel Surveillance Program, which tracks flu cases each year.

Each week the department reports “influenza-like illness” data for the national Centers for Disease Control and Prevention and collects samples for virus strain identification. The reports include the total number of patient visits to each provider for that week and the number of those patients with influenza-like illness in North Carolina.

Oliver said the department has given about 170 fewer than last year, between July 1 and Jan. 27. She said the decrease in numbers is partly because some of media outlets have reported that the vaccine is not effective on this year’s most prevalent flu strain.

“However, (the vaccine) is still one of the top defenses against the flu, and we do recommend everyone still get the vaccine. There have been a variety of flu strains found in testing, and having the vaccine may be effective on the strain you get and can reduce symptoms and/or length of sickness for other strains,” she said.

Some of the ways to prevent the spread of the flu is washing hands, using disinfectant and wearing a mask.

Bream said if someone has flu-like symptoms, he should wear a mask to prevent airborne transmission, which can occur up to 6 feet away.

A disinfectant must be left on a surface for up to four minutes and left to dry to be effective.

The virus can be spread if someone wipes his mouth with a towel. Officials recommend that anyone with the flu quarantine himself.

To prevent the spread of the virus at hospitals, staff members are required to get the flu vaccine. There are visitor restrictions in place including not allowing visitors under the age of 13 unless there is a family member who is near death or the child is a patient.

The hospital doesn’t take any more precautions than usual, which includes disinfecting all rooms after patients are discharged, changing sheets and wiping down stretchers.

Oliver recommends that sick people stay home from work to protect others. She also recommends to cover coughs and sneezes with the elbow and to avoid touching any mucous membranes such as in the eyes, nose or mouth.

Although hand washing sounds like a simple thing, it is highly effective against spreading the flu, she said.

“Frequent hand washing helps to slow the spread of germs that cause respiratory illnesses, like flu. Wash your hands with warm soapy water for the length of the ‘Happy Birthday’ song. We also encourage clients that have flu-like symptoms to wear masks in waiting rooms to help prevent spreading it to others,” Oliver said.

Kyle Yoder, a pharmacist at Moose Pharmacy, said he recommends people be aware that hand washing is important, not just during flu season but to help prevent the spread of germs throughout the year.

He also reminds patients they can still get the flu vaccine, but those who are high risk including the elderly should consider getting pneumonia vaccines — the first, Pneumovax and the second, Prevnar.

Yoder said Moose Pharmacy administered a number of vaccines in the fall. He agrees that it is about 30 percent effective but said it is better than nothing and most insurance carriers will pay for it 100 percent.

“You will get a boost in your immune system, but it takes two weeks to become effective,” he said.

He said occasionally people will say they got the flu from the flu shot, but he said it’s likely they already had the flu before the vaccine took effect.

The pharmacist said despite a shortage of Tamiflu, his store has plenty.

Tamiflu is now available in generic form. For most people with insurance, it can be a $10 co-pay while those without insurance would pay a little over $100.

Yoder said the pharmacy has dispensed more Tamiflu this year than last year.

“Flu is more prevalent in the community this year than last year. The flu hasn’t been terrible the last couple of years, and they may not have been vaccinated or the vaccine just isn’t as effective this year. It is bad this year,” he said.

In this area, the flu hit a little earlier this year, moving in at the beginning of January.

“We usually see peak flu season the last of January or in February,” he said.

The pharmacy has sold more cold and flu medications than it normally would, Yoder said. But he added that one homeopathic remedy, Oscillococcinum, which is most in demand, is on back order nationally.

Bream said the hospital doesn’t give Tamiflu to just anyone with flu-like symptoms.

According to the Centers for Disease Control and Prevention, antivirals like Tamiflu work best when begun within 48 hours of getting sick.

People at high risk of serious flu complications, such as children younger than 2, adults 65 and older, pregnant women, people with certain long-term medical conditions, and residents of nursing homes and other long-term care facilities or people who have been hospitalized with the flu should get antiviral drugs.

Bream said studies have shown Tamiflu decreases flu symptoms for only about eight to 12 hours.

“It doesn’t cure you or decrease the severity. It decreases the duration of the flu by about 12 hours,” he said.

Staff members at Rufty-Holmes Senior Center say they have not seen much flu but are taking extra precautions like disinfecting areas. No classes or activities have been canceled because of it, said Director Nan Buehrer.

Rowan Helping Ministries officials say they are thankful the flu has not been a severe problem at the shelter. However, the staff is taking plenty of precautions.

“We have an environmental custodian here five days a week. She has face masks, Lysol, the works, and she wipes doorknobs and light switches constantly throughout the day,” said Erica Taylor.

In addition to cleaning regularly, Rowan Helping Ministries has face masks for those displaying symptoms of illness. If someone at the shelter feels ill, he has the option to be moved to a less populated area of the shelter to prevent the spread of germs.

“We are doing what we can. Masks are about all we can do in these close quarters,” Taylor said.