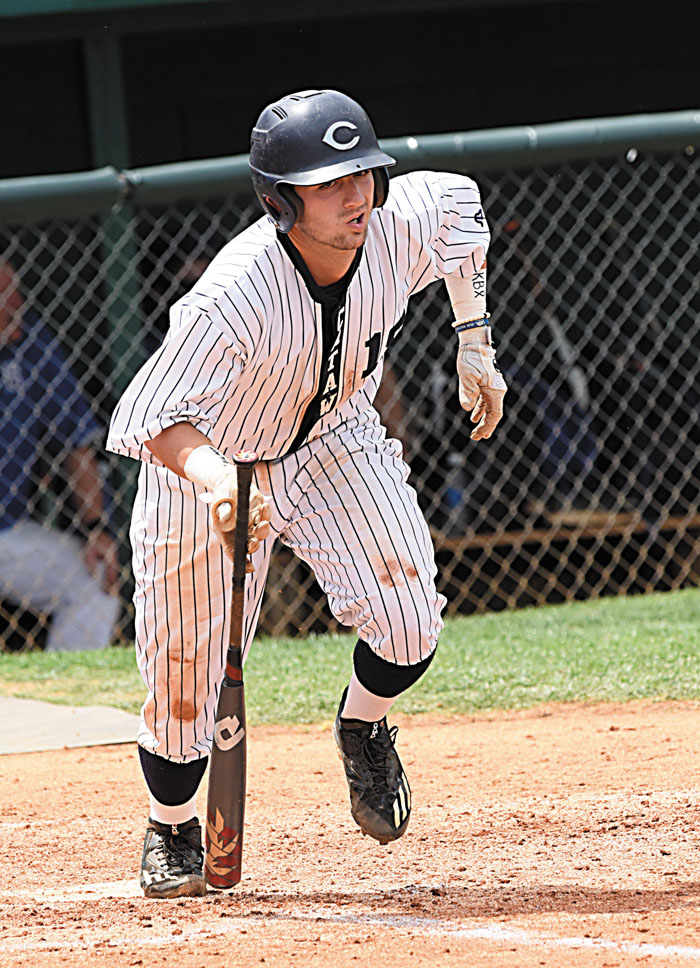 Catawba’s Chance Bowden gets a hit during a game against Brevard on April 22, 2017. Photo by Wayne Hinshaw, for the Salisbury Post.

Salisbury High graduate Chancellor Lingle Bowden stayed home and went to Catawba College expecting to win a lot of baseball games and to compete for championships. He hasn’t been disappointed with his career.

Chancellor is a mouthful, so he’s always answered to Chance. He’s always been a first baseman, ever since the first day he stepped on a baseball field. He plays first base now as well as anyone coach Jim Gantt has ever seen at this level, saves so many throwing errors and snags so many hot shots that he would be in the lineup even if he batted .200. But besides preventing runs, he hit .355 last year. His RBI totals the last three seasons have been the model of consistency— 50, 47, 53.

Bowden wallops doubles as frequently as anyone who’s ever played at Catawba, and the program’s baseball records date back to 1926. He already owns the school records for doubles in a game (4), a week (9) and a season (31). At some point this spring, he’ll break Blair Reynolds’ career record for doubles. The standard is 69 and has stood since 2003. Bowden enters his senior season with 64 two-baggers.

“I hit so many doubles when I was a sophomore (he was  honored as national hitter of the week the week he had nine) that I naturally started looking to see what the records were,” Bowden said.  “I’ve known for a while that I had a chance. But you can’t really think about records or doubles.”

There’s no secret to hitting doubles. Just a lot of hard contact, and Bowden stays gap to gap, He never gets pull-happy.

“I was a freshman playing in the World Series, but I really wasn’t as nervous as I thought I’d be,” Bowden said. “We had a lot of older guys then, great players (Will Albertson, Craig Brooks, T.J. Wharton, Blake Houston, Dylan Richardson). There was no pressure on me. All I had to do was go out and play. It’s really harder now because I’m one of the seniors who has to produce so the young guys can relax.”

The years slide by in a hurry. Bowden, the shy, 18-year-old, wide-eyed freshman, has been replaced by Bowden, the 22-year-old steely-eyed senior and articulate communications major. A lot of standouts are gone from last season’s 40-17 team, including draft picks Zac Almond and Bryan Blanton. The torch is passed now to the three senior sluggers — Bowden, All-American Luke Setzer and Kyle Smith. It’s their job to lead and to carry on Catawba’s winning tradition.

“Luke and I were talking about it just the other night, about how quickly it goes by and how quickly you go from freshman to senior,” Bowden said. “I just hope we can help carry our young guys through the rough times,  just give them an opportunity to go out and play the way they’re capable. If we stick with the process, we’ll get the outcomes we want more often than not.”

Catawba heads to Florida on Wednesday for four games and begins the season on Thursday night against the Nova Southeastern Sharks. Catawba doesn’t always win these games in Florida, but they’re important. Besides the bonding of a new team on its first road trip, the competition the Indians face in Florida is always good preparation for the SAC conference race. Someone different steps forward to challenge the Indians every year, but Catawba always seems to be on top at the end. That trend might continue.

“We’ve been looking good in intra-squads,” Bowden said.  “But we know winning isn’t guaranteed. Nothing is ever guaranteed.”

Cameron Morrison, named the Area III Player of the Year for his work with the Post 45 Randolph County American Legion team, steps in for Almond as the starting catcher.

“He really learned a lot playing behind Zac,” Bowden said. “He’s going to do fine.”

Blanton will be difficult to replace as the lights-out, automatic closer, but Bowden is confident the Indians can accumulate saves by committee.

Shoulder surgery that knocked Gold Glove shortstop Jeremy Simpson out for the season means increased opportunity for others, especially middle infielders Jacob Nester and Joe Butts. Bowden has faith in them.

Bowden, who throws left-handed but bats right-handed, had some injury struggles of his own late last season, essentially breaking a wrist in the SAC tournament and playing through the pain in the Southeast Regional. The injury knocked him out of wood-bat league action last summer.

“It was an injury that the only thing that was going to help it was rest, so I had to take the summer off,” Bowden said. “But by August, it was feeling great again, and I’m back to 100 percent now.”

Bowden (6-1, 195) has launched 21 career homers, with 11 flying out of the park his junior year. He’ll never be a classic home-run hitter, he’s more of a line-drive guy, but he could smack 15 this season.

Bowden has progressed steadily upward in the Catawba lineup, from seventh as a freshman, to fifth as a sophomore, to cleanup as a junior. Gantt has Bowden’s name penciled into the 3-hole this year, a spot generally reserved for the best hitter.

“That’s definitely where I want to be,” Bowden said. “But we’ll just have to see how the lineup works out. Luke (Setzer) is such an intense player and he’s been great getting us started as the leadoff man. But Luke may end up batting third or fourth, depending on how other guys are doing.”

It was cold with a bitter wind thrown in at Catawba’s practice on Monday. Bowden’s thoughts turned to sunny Florida. The Indians, who will play seven straight home games in mid-February, should see a high temperature of 76 and a low of a relatively balmy 58 on Thursday.

“We were freezing today,” Bowden said. “We’re ready to get down there.”