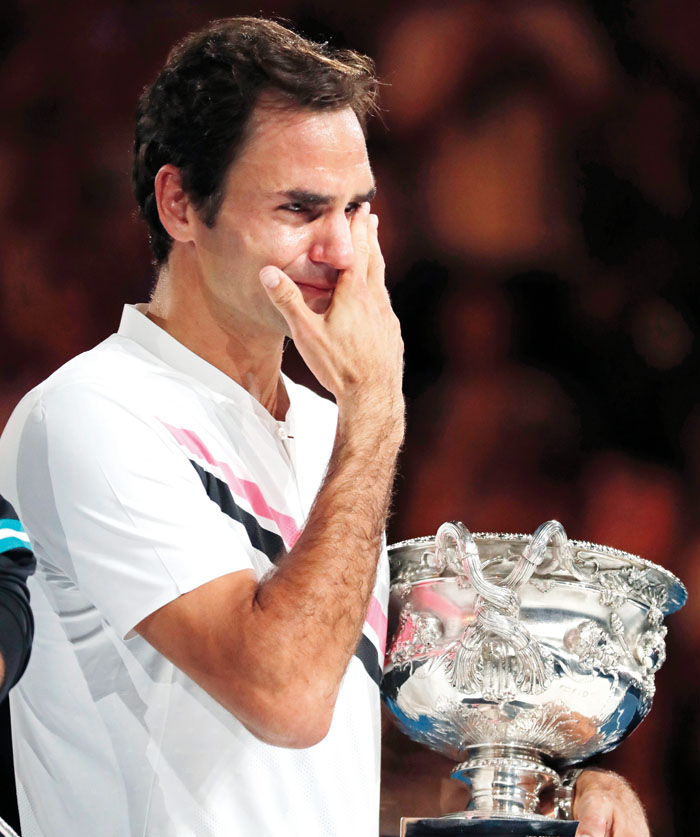 Switzerland's Roger Federer wipes tears away from his eyes as he holds his trophy after defeating Croatia's Marin Cilic during the men's singles final at the Australian Open tennis championships in Melbourne, Australia, Sunday, Jan. 28, 2018. (AP Photo/Vincent Thian)

Federer has won more major singles titles than any man, including a record-equaling six on the court that bears the great Rod Laver’s name at Melbourne Park.

Laver has been involved in the on-court presentations in the past, witnessing Federer’s tears at close range. This time, the 79-year-old Laver — the only man to twice win all four Grand Slam titles in one season — held up his mobile phone to get the shot from the stands.

“I didn’t see that through my thick tears, that he was taking a picture of me crying,” Federer said. He joked in a TV interview that, “I couldn’t lift my head, I was so embarrassed.”

Surely, it’s only an embarrassment of riches.

Federer arrived in Melbourne at the start of 2017 after an extended injury layoff and on a Grand Slam title drought that dated back to 2012 at Wimbledon. Against the odds, he reached the final and then beat Rafael Nadal in a classic, five-set encounter. Now, having successfully defended his Australian title, Federer has won three of the last five majors in a stunning career resurgence.

“I’m so happy. It’s unbelievable,” Federer said, taking deep breaths and choking back tears. “Of course, winning is an absolute dream come true — the fairytale continues for us, for me, after the great year I had last year, it’s incredible.”

Federer started to tear up toward the end of the trophy ceremony. He then received a standing ovation as tears streamed down his face.

At the age of 36 years, 173 days, Federer became the second-oldest man to win a Grand Slam singles title in the Open era after Ken Rosewall, who won the 1972 Australian Open at 37.

The match wasn’t entirely without controversy after organizers decided to close the roof for the final, just as they had for the afternoon mixed doubles final when Mate Pavic and Gabriela Dabrowski beat Rohan Bopanna and Timea Babos for the title.

Former champions were among the commentators questioning the decision, suggesting there’d been hotter days when the heat policy was not enacted.

“I was surprised to hear they had the heat rule in place for a night match. I never heard that before,” Federer said. “For me, it doesn’t change anything.”

Tournament referee Wayne McEwen has the option of closing the roof when the temperature reaches 40 degrees Celsius (104 Fahrenheit) and a measure called the wet-bulb globe temperature — which combines factors such as heat, humidity and breeze — reaches 32.5C (90.5F).

“With no dramatic reduction forecast, the referee exercised his discretion and called for the roof to be closed,” Tennis Australia said in a statement. “At no other time during the event this year has the WBGT reading reached the threshold.”

“Mentally was tough. Also was difficult with conditions. Throughout the tournament I played all my matches outdoors, also preparing a hot day,” Cilic said. “Then first match for the final to play with the roof closed, it’s difficult.”