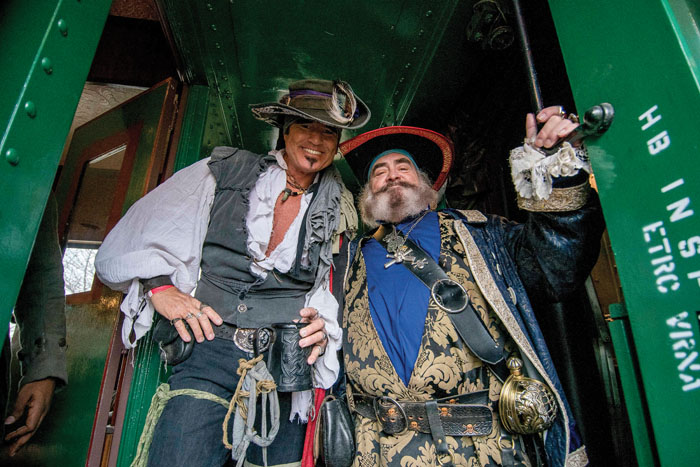 It began when museum volunteer Scott Adams learned that a touring exhibit of artifacts from Blackbeard’s pirate ship, the Queen Anne’s Revenge, would be making a stop in Spencer.

Scott spends a greater portion of the holiday season portraying Santa Claus in the museum’s gift shop. But, he has another passion outside of personifying Father Christmas himself.

Namely, Scott and his wife Kathy Adams are avid pirate re-enactors. They gather often with a group of fellow pirate enthusiasts called ‘The Scoundrels of the Sea.’

“When I found out they were having this exhibit, I said, ‘Oh, would you like to have some pirates?’ said Scott, who goes by Commodore Spyglass when he’s in full costume. “They said ‘Oh yeah!'”

Scott would in turn call in the Scoundrels. In total, 15 members of their group volunteered, providing Blackbeard exhibit attendees a chance to share meals and take pictures with a convincing pirate crew.

Convincing they were. Crew members were clad in an eclectic mix of ornate hats, tailored jackets, vests, bodices, knee boots and more.

Kathy and Scott said the costumes were often perfected one piece at a time and could take years to complete.

The key to getting started, Kathy said, was to find one signature piece and build a look around it. Usually, this piece was a hat: a tricorn or a cavalier for example.

For the Adamses, events like Saturday’s Pirate Day offer more than a chance to show off their pirate garb, they said. They’re a chance to give back.

“Sometimes we do charity work. We’ve gone to hospitals. We’ve done other events like that,” said Kathy. “We just thought this would be a good way to help the Transportation Museum have just a little bit more pirate and ‘argh!’ in their life.”

Artifacts from the Queen Anne’s Revenge were discovered in the mid-1990s near North Carolina’s Beaufort Inlet. The display in the museum included weaponry, nautical tools and personal items.

“Pirates are very popular and very fun and they just cross over all generations,” she said. ” … It’s just a fun way to enhance the exhibit and get some hands-on activities to go along with it.”

Attendees on Saturday enjoyed pirate music and kids activities, pirate storytelling, and a sword-fighting performed by the Shadow Players Combat Group based out of Raleigh.

The Shadow Players were led by Steve Whetzel, who has served as the ‘real’ pirate mascot for East Carolina University Pirates since 2009.

“This is just another part of us branching out and doing unique activities and offering events for all kinds of different interests,” said Alexander. “We’re trying to start the year out with a bang — no pun intended.”

The Blackbeard’s Queen Anne’s Revenge exhibit will be on display at the North Carolina Transportation Museum until Feb. 27.