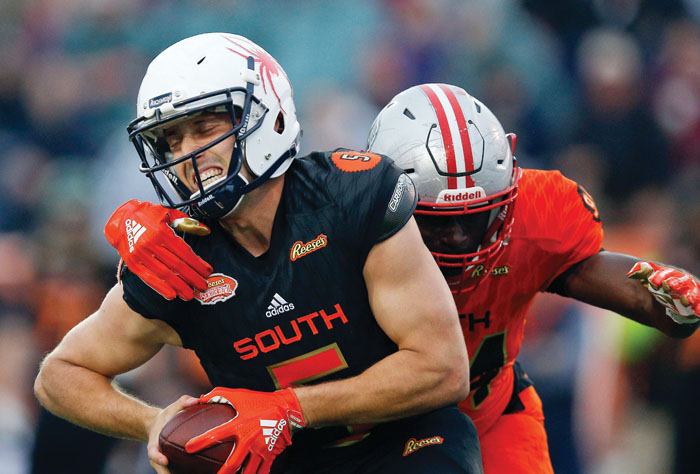 South Squad quarterback Kyle Lauletta, of Richmond, avoids a sack by North Squad outside linebacker Dewey Jarvis, of Brown, during the second half of the Senior Bowl NCAA college football game in Mobile, Ala., Saturday, Jan. 27, 2018. Lauletta threw three second-half touchdown passes to lead the South team to a 45-16 victory. (AP Photo/Brynn Anderson)

MOBILE, Ala. (AP) — Kyle Lauletta more than held his own in elite quarterback company.

A standout at FCS Richmond, Lauletta threw three second-half touchdown passes and Texas-San Antonio’s Marcus Davenport scored on a 19-yard fumble recovery to lead the South team to a 45-16 victory over the North in the Senior Bowl on Saturday.

“We knew that we were underdogs coming into the game for whatever reason,” said Lauletta, chosen as the game’s Most Valuable Player. “I guess that kind of motivated us. We knew that those quarterbacks on the other side were getting all the attention. So we just went out there and played our game. We did what we know how to do.”

Lauletta completed 8 of 12 passes for 198 yards, including a 75-yard touchdown strike to LSU’s DJ Chark and some other nice downfield throws. Davenport, projected as a likely first-rounder and potential Top 10 pick, scooped up a fumble forced by Mississippi’s Marquis Haynes to punctuate a big third quarter.

Allen finished 9-of-13 passing for 158 yards, all but 14 coming in the third quarter, along with a pair of touchdowns.

Mayfield played only the North’s first two drives, going 3 of 7 for 9 yards. He left before the second half to fly to Austin, Texas, to be with his ailing mother.

Mayfield was named the game’s top quarterback after the practice sessions led by the Denver Broncos staff. Team officials requested him for the North squad.

“He’s a great dude, the ultimate competitor,” Allen said. “I think we actually made each other better this week.”

Allen and Lauletta forged a nice third-quarter duel with each launching a couple of touchdown passes.

Allen led an 81-yard touchdown drive to start the second half with the North trailing 18-3. He ran for a first down and passed for a fourth-down conversion before faking an end around handoff and hitting Central Michigan tight end Tyler Conklin in the right corner of the end zone for a 16-yard touchdown.

He followed that up with two big throws right on target: A 31-yarder to Colorado State’s Michael Gallup and a 27-yard touchdown to Notre Dame tight end Durham Smythe. The potential tying two-point attempt failed.

Lauletta answered on the next play with the bomb to a wide-open Chark. He also had a long pass from his own end zone and broke two tackles in the backfield on another play. Chark had five catches for 160 yards and flashed a celebration he called his “little cat dance” where he mimics a cat.

“That’s the dance I’ve been waiting on for four years,” he said. “You can’t celebrate in college so the first time I got a touchdown I could celebrate, I had to pull it out.”

Chark and San Diego State running back Rashaad Penny were co-South Most Outstanding players. Penny ran nine times for 63 yards and caught a 73-yard touchdown pass from Virginia’s Kurt Benkert. Allen was chosen as the Most Outstanding Player on the North.

Nebraska’s Tanner Lee attempted the most passes, completing 8 of 19 for 86 yards with an interception. He also lost a fumble. Western Kentucky’s Mike White had a big first half, going 8 of 11 for 128 yards and a TD. Benkert threw for 90 yards on 4-of-11 passing with a TD and interception.

UCF linebacker Shaquem Griffin, who doesn’t have a left hand, had four tackles but also had a week of practices to prove himself. “I felt like I had to prove myself because obviously scouts can say one thing and people are going to say another,” Griffin said. “I had to make sure that I could show everybody what I could do, and I think I was able to accomplish that this week.”

The Denver Broncos (North) and Houston Texans (South) coaching staffs led the teams. The Broncos, who got to work with quarterbacks Allen and Mayfield, have the fifth overall pick and are in need of a QB. The Texans traded their first- and second-round picks last year to get Deshaun Watson and don’t pick until the third.