No. 2 Virginia gets it done in Durham, behind Guy and Jerome 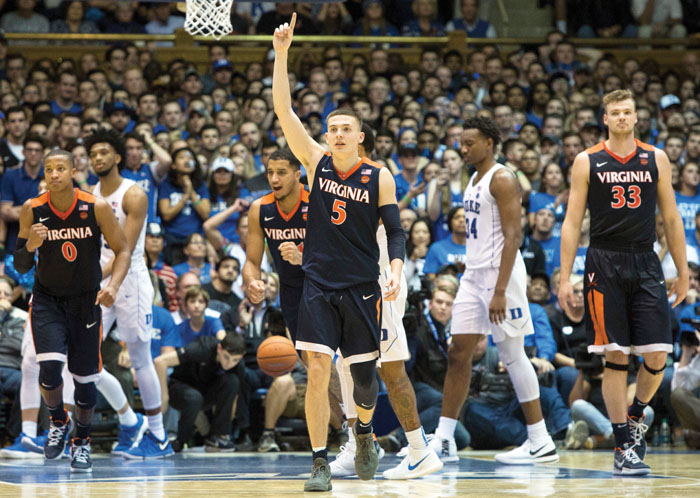 Virginia's Kyle Guy (5) leads his team off the court following a 65-63 victory over Duke in an NCAA college basketball game against Duke in Durham, N.C., Saturday, Jan. 27, 2018. (AP Photo/Ben McKeown)

DURHAM (AP) — Before Ty Jerome hit the shot that effectively beat No. 4 Duke, the Virginia guard stole the ball.

It figures. For the second-ranked Cavaliers, even their daggers trace back to that punishing defense.

Virginia beat the Blue Devils 65-63 on Saturday after Jerome hit a critical 3-pointer with 37.6 seconds to play.

Kyle Guy scored 17 points and hit two free throws with 6.1 seconds left, Jerome finished with 13 points and Devon Hall had 14 points to help the Cavaliers (20-1, 9-0 Atlantic Coast Conference) win their 12th straight and their first at Cameron Indoor Stadium since 1995.

“They find ways,” coach Tony Bennett said. “They’re a team that’s a joy to coach because they’re pretty clear who they are, and it doesn’t matter who’s hitting the shots.”

The nation’s stingiest defense held the top offense in Division I to more than 28 points below its average of 91.7 points. Virginia, which entered allowing an average of 51.6 points, held the freshmen-dominated Blue Devils 15 points below their previous season-low point total.

“I was a freshman once, and you’re not really prepared for this type of pressure that we put on the ball and our defense,” Guy said.

Jerome started the key sequence by stealing freshman Trevon Duval’s long pass in the Duke frontcourt, then ended it with a 3 with the shot clock winding down that put Virginia up 63-58. Both he and Guy made things tense by missing the front ends of one-and-ones in the final minute.

Bagley swished a deep 3 with 7.4 seconds remaining before Duke fouled Guy again, and this time he hit both attempts to make it 65-61 and effectively seal it. Bagley added a layup at the buzzer.

Virginia: The Cavaliers more than justified their No. 2 ranking and their status as the ACC’s team to beat by coming into Cameron and winning for the first time in more than two decades. This certainly counts as the marquee road victory their resume perhaps may have lacked, and Bennett says his team’s lone loss — last month at No. 7 West Virginia — helped in preparing for this one.

“That’s why we play those West Virginia games,” Bennett said. “A West Virginia-type game, not finishing out, I think that all adds to a successful element today.”

Duke: The Blue Devils leaned heavily on their starters — using zero substitutes in the second half and playing two reserves, Javin Delaurier and Alex O’Connell, for a total of six minutes all day. It’s fair to wonder if they ran out of gas down the stretch. Bagley was the only Duke player to hit a field goal in the final 8 minutes.

“If we want to win something really big, your best players have to play a lot of minutes,” coach Mike Krzyzewski said. “And I think that’s what the regular season’s about, is preparing for — hopefully, we’re in it in March. So I think we learned a lot.”

The Blue Devils’ failure to hold serve on their home court figures to cost them at least a couple of spots in the rankings, though there’s certainly no shame in losing a top-five matchup that comes down to the final minute. As for the Cavaliers, well, they can’t climb too much higher than No. 2 but might have earned a few more first-place votes.

Duke had 16 turnovers to Virginia’s five, with the Cavaliers turning those miscues into 14 points while the Blue Devils managed just four points off the ones they forced. … Duke held a 44-31 rebounding advantage, but Virginia wound up with 12 second-chance points to the Blue Devils’ 10.

Virginia led by 13 early in the second half before Duke switched to a 2-3 zone defense and reeled off a 19-4 run to tighten the game back up. The Cavaliers had no trouble creating open shots against the zone but struggled to make anything during the 8-minute stretch in which the Blue Devils got back in the game.

“I kept trying to tell our guys in the timeout, if we could just make a look, it’ll maybe open it up a little bit,” Bennett said. “And just keep guarding your heart out.”