George and the Boss: Theiss is forever linked to his glory days of playing, writing songs with Springsteen 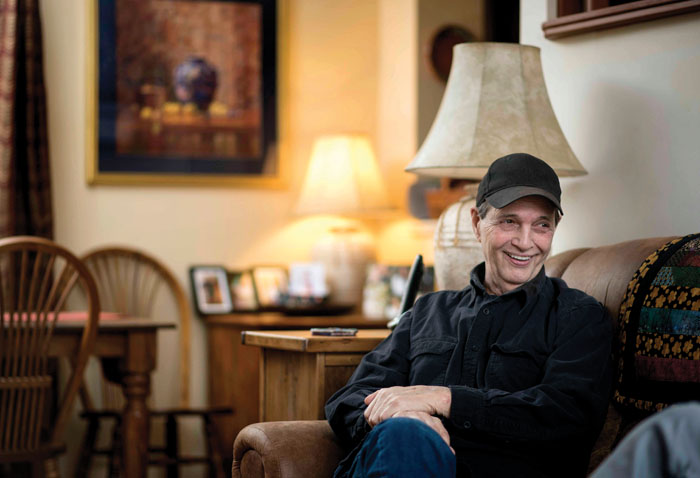 JON C. LAKEY / SALISBURY POST During his teenage years living in New Jersey, George Theiss was in a locally popular high school band that included a young Bruce Springsteen. George and Diana Theiss moved to Rowan County from New Jersey several years ago to take advantage of the lower cost of living in their retirement years. The Theisses have been living in Rowan County since 2010.

SALISBURY — George Theiss was dating Ginny Springsteen for a long time before he realized her brother, Bruce, could play the guitar.

Theiss and his newly established group, the Castiles — named after a shampoo George was using — were looking for a lead guitar player. As Bruce Springsteen remembers it in his recently published memoir, he was sitting in his South Street home in Freehold, New Jersey, one afternoon when Theiss knocked on the door and invited him to audition for the Castiles.

In a neighborhood called Texas, they walked over to Center Street and entered the duplex residence of Gordon “Tex” Vinyard and his wife, Marion. The couple had moved everything out of their dining room to make room for the Castiles’ practices.

Springsteen auditioned that day, mainly for Tex, and he came back the next evening and played more songs he had learned. George Theiss says he and the other Castiles voted Springsteen into the band.

He could never imagine it then, but Theiss, a Rowan County resident since 2010, would find himself forever linked to Springsteen.

As teens, George Theiss and Bruce Springsteen played together in the five-man Castiles for three full years — more than 100 appearances, including gigs at Cafe Wha? in Greenwich Village, New York.

Theiss co-wrote and sang lead on the first songs Springsteen ever recorded. He and Springsteen penned those first two songs in the back seat of Vinyard’s car during the 30-minute drive to a shopping center studio.

Springsteen remembered Theiss as bearing a resemblance in those days to both Elvis Presley and Paul McCartney. Among the Castiles, he would add, Theiss definitely was the ladies’ man, the resident Lothario.

The men shared milestones. Springsteen attended George’s wedding in 1969, and they sometimes celebrated their September birthdays together because they are only a day apart in age.

In the cottage industry that documents the history of Springsteen, Theiss is always — and must be — mentioned. The music relationship between Theiss and Springsteen frayed in late 1968, and the Castiles fell apart.

“Frayed” was a word Springsteen used.

“At that point,” Theiss says, “we were really butting heads.”

Theiss would marry at 20, start a family and play in other Central New Jersey bands, including his own George Theiss Band. He worked for decades as a self-employed carpenter while wife Diana drove a school bus for 30 years.

Meanwhile, a driven Springsteen became the “Boss,” a legendary music figure for his generation.

It makes you think, of course, of how lives take different turns.

“It’s been a really interesting journey in that regard,” Diana Theiss says. “… You’re like watching this rocket take off, and it never comes down.”

When Springsteen was inducted into the Rock and Roll Hall of Fame in 1989, he invited George and Diana to attend with him.

The couple sat at Springsteen’s front-and-center table in the Waldorf-Astoria ballroom in New York. At the table with them was Pete Townsend of The Who.

That night they also saw Mick Jagger, Keith Richard, Little Richard, Stevie Wonder, Tina Turner, Anita Banker, Daryl Hall and John Oates. They traveled around Manhattan in Springsteen’s limousine, which was being hounded by paparazzi hoping to grab the first public photographs of Bruce with his now wife, Patti.

George and Diana remember that evening and early morning carried sort of a dreamlike quality, as though it were an out-of-body experience. These weren’t the circles they were used to traveling in.

Today, 50 years after The Castiles, George Theiss says he still thinks of Springsteen as that long-ago bandmate.

“As famous as you are,” George told Springsteen not too long ago, “you’re my friend.”

Springsteen, George and Diana have reconnected in the past year. Near the end of 2016, Springsteen called George out of the blue, only to learn his old bandmate was in the hospital, having just been diagnosed with lung cancer.

Through radiation and chemotherapy, the 68-year-old Theiss is 40 pounds lighter but doing well and enjoying his retirement with Diana. Their modest home, much of which George renovated inside and out, has a view of High Rock Lake.

George will return to New Jersey in March for an examination with his oncologist. Meanwhile, he and Springsteen have stayed in touch. Last year, Springsteen came to George’s mother Betty’s 88th birthday gathering in New Jersey.

George and Diana rejoice in the photographs they have on the coffee table that show The Boss holding their newest grandchild, Eren, and striking a pose with Betty Theiss, who has since died.

Many of the old friends have passed away now, too.

George Theiss was the oldest of three children in Freehold. His father was a machinist for a GM plant in Clark, and his mother was, for a time, a telephone operator.

In his early attempts at being a musician, after being inspired by the Beatles’ appearance on “The Ed Sullivan Show,” Theiss actually belonged to two bands before the Castiles.

One was called the Five Diamonds. “Nobody could play an instrument,” Theiss confesses. Members of the group wore green rain ponchos with black diamonds on the back.

The music got a little better with The Sierras. “One guy could play the guitar,” Theiss says, laughing.

The Castiles grew out of practice sessions at the home of Bart Haynes, who had just received a drum set. The boys were “making all kinds of noise” on Bart’s side of the duplex, trying the patience of Tex Vinyard on the other side.

“It went from him (Tex) complaining to bringing us over to his house,” Theiss says.

“Marion was like a second mother,” Theiss says. “Tex was more like a wise-ass bigger brother. He was a good guy overall, and he helped us out a lot.”

Tex Vinyard would serve as self-appointed manager for the Castiles. He set the agenda. He scheduled their appearances. He oversaw their practices from 3:30-6 p.m. almost every day.

Tex piled the kids and their equipment into his Mercury and drove them where they needed to go. Though sometimes unemployed, he often bought them equipment from the music shop across the street.

Vinyard was a bombastic fellow, and it was tough at first to get beyond his bravado.

“Tex was formidable in his attitude,” Theiss says. “… We were like little puppies with Tex there.”

Theiss played rhythm guitar; Springsteen, lead guitar. Front men came and went until they settled on Paul Popkin. Haynes started out as drummer until he entered the Marines and was shipped off to Vietnam. He later was killed in action in the Quang Tri Province.

For much of the Castilles’ run, from 1965-68, the drummer was Vinnie Manniello. Frank Marziotti, who was much older than the other Castiles, started out as the bass player, but he was soon replaced by Curt Fluhr.

In his memoir, Springsteen says Theiss was the best vocalist in the Castiles, and Tex Vinyard always agreed. Even years later, when Springsteen was making millions of dollars, Vinyard would tell Springsteen George was the good singer, not him.

The Castiles played everything — pop hits, rhythm and blues, guitar instrumentals and a few original songs.

Theiss confirms they even performed once for the patients of the Marlboro Psychiatric Hospital.

After they became bandmates, Theiss and Springsteen would walk to Freehold Area High School together, always after Springsteen had eaten a bowl of Cheerios.

George laughs, describing how Springsteen carried his books in high school up around his chest like a girl, not in a cool way like the other rock ‘n’ roll wannabes.

Theiss recalls the Castiles’ first show as being at a pizza place in August 1965, though Springsteen says in his book it was a cookout at the Angle Inn Trailer Park on Route 33.

Both Theiss and Springsteen say they learned a lot about playing music from Ray and Walter Cichon of a popular group in their part of New Jersey called the Motifs. “We swore it was the Kinks playing,” Theiss says of the first time they heard the Motifs. “It was so tight and so good.”

Theiss says music consumed his life back then.

“Once I started, I was never home,” he says.

On occasion, the Castiles traveled to Greenwich Village and readily accepted playing for free at Cafe Wha? — just to have exposure in that music scene where Jimi Hendrix had thrived along with some other up-and-coming acts of the day such as the Fugs and Mothers of Invention.

Because his Mercury was loaded down with teens and their equipment, Vinyard invariably would be stopped on the New Jersey Turnpike by state troopers. Theiss says he always talked too much once the trooper approached their car, and it led to Vinyard’s receiving a ticket every time.

After the Freehold High principal called members of the band into his office and ordered them to get haircuts, a petition circulated through the school and it successfully kept them out of the barber’s chair.

For Theiss, his favorite days in music came after the Castiles. He would join Rusty Chain, then Doo-Dah, then Cahoots before starting the long-running George Theiss Band in 1979.

He shared stages with many other notable musicians in his run — Mitch Ryder, Bonnie Raitt, Gram Parsons, Johnny and Edgar Winter — but none, of course, would match Springsteen.

Could George and Diana ever have guessed what was ahead for Springsteen, someone Tex Vinyard affectionately called “the bum,” not the Boss?

Springsteen came to their wedding in 1969 in a shirt and tuxedo jacket lent to him by Vinyard. Diana recalls Springsteen spent much of the reception eating, probably out of sheer hunger.

But the couple say there was always something singular about Springsteen and what he wanted from his music.

“He was hungry to reach what he was after,” Diana says. “He had tunnel vision. Nothing was going to stop him.”

Diana and George Theiss first came to Rowan County when they were visiting old friends from New Jersey who were living on Long Ferry Road. It led to their purchase of a home here in 2006, and for the next four years, George frequently traveled south from New Jersey to renovate the house.

Once Diana retired and with their two children grown and married, they relocated to North Carolina permanently — mainly “for the economics of it,” Diana says.

In years since and before his battle with cancer began, George has been able to connect with an old Jersey friend, guitar player Tom Dimock in Bakersville, and they’ve played in some small mountain festivals together.

Diana was curious about Springsteen’s 510-page memoir, “Born to Run,” which devotes a whole chapter to the Castiles and includes grainy photographs of Theiss and Springsteen together. She borrowed a copy and now has a book signed by Springsteen himself.

Diana read parts of it out loud to George.

But has he actually read the Springsteen memoir?