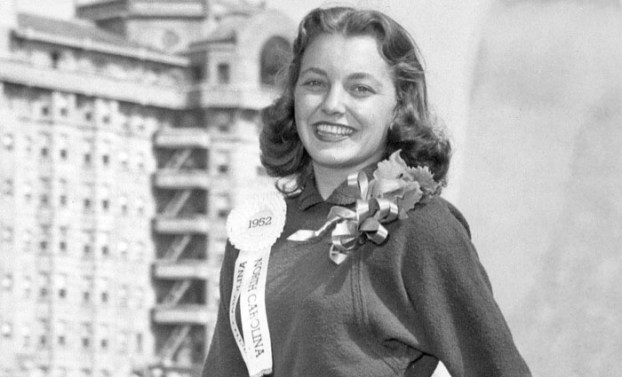 Post file photo Barbara Richmond, then Barbara Harris and the reigning Miss North Carolina from Salisbury, strikes a pose in Atlantic City during the week of activities leading to the 1952 Miss America pageant.

SALISBURY — It has been hard not to feel melancholy these past couple of days. Barbara Harris Richmond died Thursday morning, meaning the mail won’t be bringing me any more notes from her.

I will miss them terribly. Barbara still wrote with such a beautiful style of penmanship. Her notecards themselves were works of art — usually her art, be it watercolor or acrylic.

In the narrative of her notes, she might comment on something I had written or say it was good to see me at such-and-such event. On occasion, old newspaper clippings she wanted to share would drop out of the envelopes.

She once copied four whole pages of a 1919 book she was reading, thinking I would enjoy what the essay said about journalists.

Barbara always seemed to have a different way of signing off her notes. She’d write “Fondly, Barbara,” or “All my best regards” or “Your friend.”

The Barbara Richmond I knew was a self-possessed woman who already had lived a full life — a storybook life, in a way. Like any good artist, she seemed to notice and embrace the little details that could make every day richer.

I remember sitting in her breakfast room having tea one day and thinking what a smart, interesting woman this was. She had an inner beauty that matched the outer beauty and personality that made her one of the more famous people in the state in 1952.

In June of that year, only after a lot of coaxing and having just graduated from Woman’s College in Greensboro, 22-year-old Barbara Harris entered the Jaycee-sponsored Miss Salisbury Pageant and won. She topped a field of 16 contestants.

By late July, she was competing in the Miss North Carolina Pageant in Winston-Salem. She won again, as judges selected her over 37 other contestants. All the stories to come would mention how small she was for a beauty queen — 5 feet, 2 inches tall and 115 pounds.

It also was standard for the day to give her measurements, which were 34-24-34.

A hectic month followed leading up to the Miss America competition in Atlantic City, New Jersey. She toured New York and went through hours of coaching and singing rehearsals for the pageant, which included the usual bathing suit, evening gown and talent categories.

During the week, Barbara had her picture taken with the parade marshal, Marilyn Monroe. It was a tossup as to who was prettier, though Monroe raised eyebrows with a dress whose neckline plunged to her waist.

The Salisbury Evening Post sent a reporter to cover all of Barbara’s pageant activities. Editors assumed readers were so familiar with her by then that headlines sometimes referred to her as “Babs.”

All that week, Barbara stayed in luxurious Claridge Hotel facing the Boardwalk. She was attended to by two hostesses, a chaperone and an escort. Mr. and Mr. John Googe of Winston-Salem took care of many of the details, such as wardrobe, telephone calls and scheduling.

Barbara also had a Nash convertible and a private chauffeur at her disposal.

Though Barbara didn’t make the final 10 in the 1952 Miss America Pageant, she was mentioned prominently for the Grand Talent Award. She filled the Atlantic City convention hall with an aria from “Samson and Delilah,” prompting a rousing ovation from the crowd of 18,000.

That Miss America experience was only the start of a full year for Barbara. She went to work as a music teacher in Wilson City Schools, but as Miss North Carolina, she also had to make more than 100 appearances in all parts of the state (and neighboring states).

She served as princess for the Carolina’s Carousel in Charlotte, maid of honor to Queen Alexis Smith at the 1953 Azalea Festival in Wilmington and queen of the Albemarle Potato Festival in Elizabeth City.

Not long after surrendering her Miss North Carolina crown to a successor, Barbara married, became a kindergarten teacher and soon had children. Steve Spencer reminisced with me about his mother Friday afternoon.

Steve had been making the trip from Charlotte to Salisbury frequently over the past six months as Barbara’s health deteriorated. She was 87 when she died.

It was with husband Dave Richmond, an Englishman, that Barbara restored two houses — the Virgie Jenkins home on Maupin Avenue in the early 1970s and the Richmond Inn bed-and-breakfast in Spruce Pine in the 1980s.

Barbara did all the cooking and baking for breakfast at the inn, one of the largest homes in Spruce Pine. The Richmonds moved back to Salisbury in 2005, and not long after that David died.

When I came to know Barbara, she was 82, swimming three times a week, painting, singing and fretting about all the books and personal artifacts filling her rambling house on Camelot Drive.

One of the things she sent me once fell out of a book she had claimed from the Jenkins house renovation.

It was a yellowed, flimsy newspaper story. She guessed it came from the Salisbury Evening Post in the 1940s or early 1950s. She wasn’t sure.

The article carried the headline “Better Park on Girlfriend’s Sofa — Law is After Smoochers.” In three paragraphs, the story documented efforts by local law enforcement and the State Highway Patrol to crack down on all the boys and girls who were parking.

“The new and determined campaign will start tonight,” the story reported, “and all who are caught parking will be hauled into court. … The new ruling is the result of many complaints from people residing in Milford Hills, the Country Club section, the area around Catawba College and the communities near rural churches.”

In her note, Barbara said, “It is so far removed from most romancers nowadays, it makes me laugh.”

I had to laugh, too. I will miss you, Barbara Harris Richmond.

BADIN — As preparation for a prescribed fire of more than 100 acres, the Black Hawk helicopter from the N.C. National Guard... read more