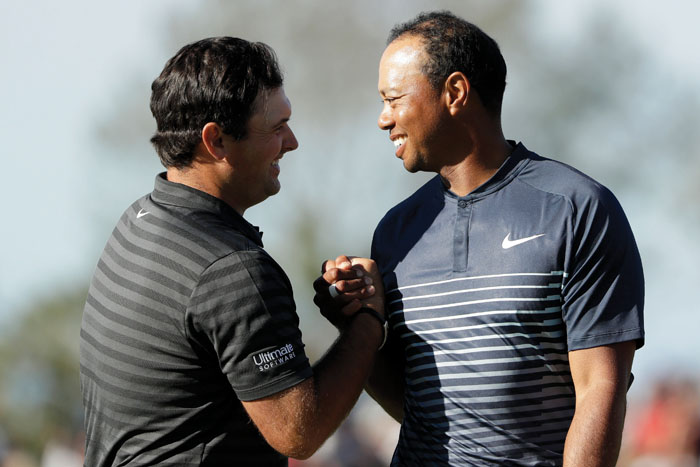 SAN DIEGO (AP) — These are the new realities for 42-year-old Tiger Woods. He had to grind out a round simply to be able to play on the weekend and is getting used to the “feels” of his surgically repaired back.

Woods didn’t have to race off to the airport Friday, after all. He made the cut right on the number in the Farmers Insurance Open by rallying with four birdies on his back nine for a 1-under 71 on the North Course at Torrey Pines.

It’s the first time in 29 months that Woods will be playing the weekend on the PGA Tour.

“It was a grind,” Woods said a few minutes after walking off the course to cheers. “I fought hard. Typical, you know, just me going out there and fighting for whatever I can get. It’s all good.”

This is only his second PGA Tour event since he tied for 10th in the Wyndham Championship in August 2015. He had two back surgeries that fall, and fusion surgery on his lower back last April.

When was the last time he felt this type of grind when he was healthy?

“Physically healthy?” Woods replied. “Oh jeez, that was probably back in ‘13. So, four, five, six years ago, somewhere around there. It’s been a while.”

Thus Woods’ frequent mention of the “feels” of his body.

“Totally different feels, because my body’s different,” he said. “I can’t tell you it’s the same feel I had then because I wasn’t fused. This is a different body. That’s why I’m excited to play the weekend, continue getting used to my feels, because they are different. I can do it at home and hit certain shots, but come out here in competition and my adrenaline goes up a little bit. I hit the ball further, but how much further? On top of that, what are my new feels going to be? These are the things I’m going to have to learn. I need more time under the fire of competition.”

He’ll be coming back Saturday to a course that’s been good to him over the years. He’s won this tournament seven times, and Torrey Pines was the site of his dramatic U.S. Open win in 2008, plus a World Junior World Championship as a teenager.

Through his first 31 holes in this tournament, there weren’t many signs that Woods would be here for the weekend.

He was at even-par 72 after Thursday’s round on the South Course, when he frequently showed frustration with the state of his game.

He started his round Friday on the North Course’s par-5 10th and sent his drive 65 yards left of the fairway, forcing him to scramble for a par. He took a double bogey on the 459-yard, par-4 13th. His drive went into the ravine to the left and he took a penalty drop. He missed the green to the left and chipped through the green before two-putting.

That was the worst of it.

He began to right himself with a birdie on No. 1. He birdied No. 5 to reach even par and then got inside the cut line with a birdie on his 16th hole of the day, going 1 under for the first time in the first two rounds. He stumbled with a par on No. 8, again raising doubt about whether he’d stick around

Of his four birdies, none was bigger than the last one. He was one shot out of the cut line when he reached the far right side of the green on the par-5 ninth, some 75 feet away. Needing two putts for a birdie, he lagged it beautifully to a few feet short and tapped in.

Woods has struggled off the tee.

“It’s still not quite right and I need to fix that,” he said.

“It had not been happening. But under competition it’s a little different story. I need to get used to what my feels are. I haven’t felt these things in a while: what shot shape, where am I going to land the ball in the fairway, what angles do I need and all the little things. When I’m at home, I’m buzzing through with a cart and playing my home course so it’s a little bit different.”