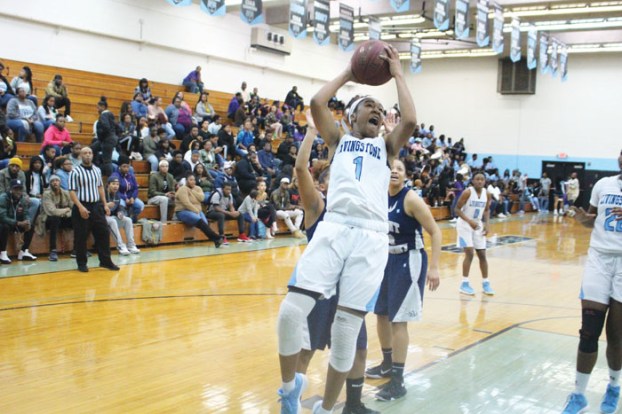 The Falcons sank 28 of 34 free throws en route to improving their records to 6-13 overall and 3-7 in the conference. The loss was Livingstone’s 10th straight as the Blue Bears fall to 5-14 and 0-9.

Livingstone missed leading scorer Kyala Searcy, absent due to a death in her family. Searcy’s 16 points per game have been leading the team since Zena Lovette (26.0 avg.) left the team just before Christmas.

Livingstone led some early in the game, but St. Augustine’s went up by as much as 12 points in the second period, on the way to a 36-29 halftime advantage.

Both teams shot about the same from the floor in the first half (35 percent), but the Falcons made 11 of 13 free throws while Livingstone was just 1-of-3.

But the Blue Bears refused to quit and behind guards Taylor Perkins, Kedra Bradley and Asia Green, Livingstone pulled to within seven points (64-57) with 3:26 remaining in the game.

Perkins, a freshman, led Livingstone with 16 points, followed by 13 from Tianna DeBerry and 12 from Green. Perkins and Daytia Foote led the Blue Bears in rebounding with nine boards each.

Kaaliya Williams led St. Aug’s with 23 points and eight rebounds. Renwicks scored 15 points while Quiera Gilmore had a double-double with 10 points and 10 rebounds.

Livingstone returns to action on Monday night, going to Elizabeth City State. The game was postponed earlier this month due to snow.