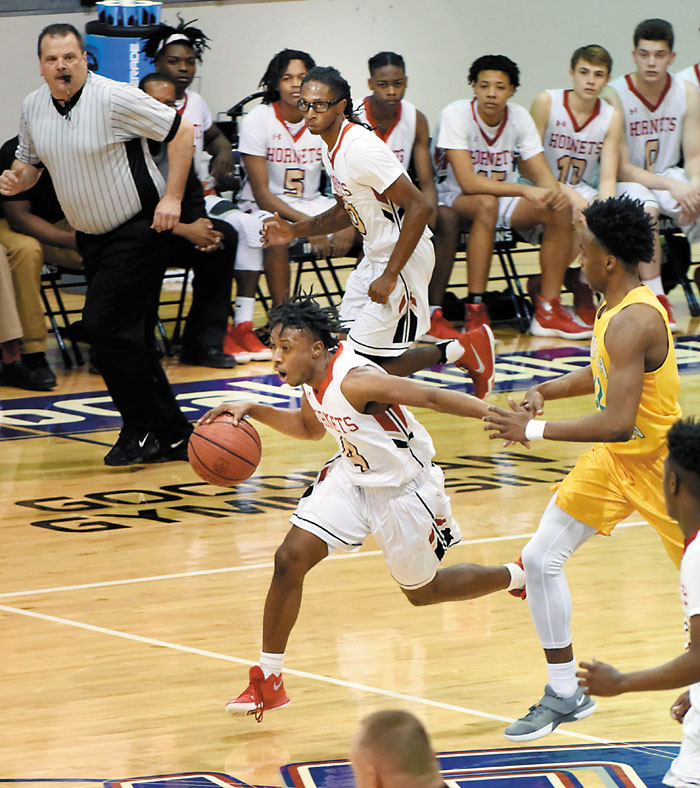 SALISBURY — In all of his basketball days, Salisbury senior Oshaun Robinson had never scored a game winning buzzer-beater.

The 6-0 guard grabbed an errant rebound and calmly drained a 15-footer with 0.1 left, giving the Hornets a thrilling, 51-49 win Saturday night over rival North Rowan.

Playing before a loud and boisterous crowd at Catawba College’s Goodman Gymnasium, the two county neighbors battled down to the wire as expected. But Robinson made sure there would be no overtime. He only scored four points in the game but the last two were golden.

“I saw the rebound come off and had to go get it,” Robinson said. “My shot was off all night, so I knew it would either go in or not. But I got a good look and knocked it down. It felt pretty good.”

The contest was destined for a dramatic finish as North (10-8) rallied from five points down to tie the game at 43-43 with 4:05 left. Then, a minute later, Dajuwon Cooke’s free throw put the Cavs up by one.

But Salisbury stayed patient and regained the lead at 47-46 with 1:09 left. When Cameron Gill hit a pair of free throws for Salisbury, the lead was 49-46 with just 33.8 seconds remaining. But Cooke, North’s 6-4 junior forward, capped a stellar  game with a driving “and-one” layup. His foul shot knotted game again, 49-49, with 23 seconds showing on the clock.

That set the stage for the final drama as Salisbury worked for a good shot with the clock ticking down. Speedy senior guard Trell Baker sliced down the lane but the shot was off target. Jaquan Davis grabbed the offensive board, but his put-back came off the rim and bounced right to Robinson to the right of the circle. Robinson’s shot swished through as the buzzer sounded to end the game at 51-49.

“This team has done that all season,” said Hornets’ head coach Bryan Withers, referring to how the Hornets battle to the end. “On any night, it is a different person coming through for us and that is when you know you have a good team.”

Both teams were wrapping up a four-game week and the fatigue showed at times as some sloppy play and extended scoring droughts plagued both. The Hornets did lead by as many as seven points twice in the second half, but turnovers and missed free throws allowed North to climb back in it.

“I was real proud of the effort that our guys gave tonight,” said interim Cavaliers’ head coach Bill Kesler. “We really needed to rebound better and it hurt us at the end. I thought we might have drawn the charge on that (Baker’s) drive at the end, but when we didn’t, we really needed to get the rebound.”

The Cavaliers could not have asked for more from  Cooke, who scored 12, including the three-point play to tie it at 49-49. He also dominated the boards with 12 rebounds.

“I just think we need to finish off games like this one tonight,” Cooke said. ” We need to get started earlier and keep our intensity the whole game. This game was just too close to do anything else.”

For the Hornets, eight players contributed to the scoring, led by senior guard Elijah Moss with five 3-pointers for 15 points. Gill came off the bench for 10 points while Fisher scored eight and grabbed six rebounds. Baker finshed with five points, 10 below his average. North’s Brevin Goodlett matched Cooke with 12 while Dajuan Clement scored eight, including a pair of 3-pointers.

Both teams return to the final stretch of conference games this week, with the Hornets hosting Ledford on Tuesday in the CCC and North traveling to West Montgomery in the YVC.

NOTES: Both Kesler and North Rowan athletic director Ben Hampton confirmed after the game that the veteran coach Kesler would be the Cavs’ interim coach for the remainder of this season. Coach Martin Unger decided Friday morning to give up his interim position with the team after leading North for the first 16 games. He cited time away from his family as a key factor in the decision.