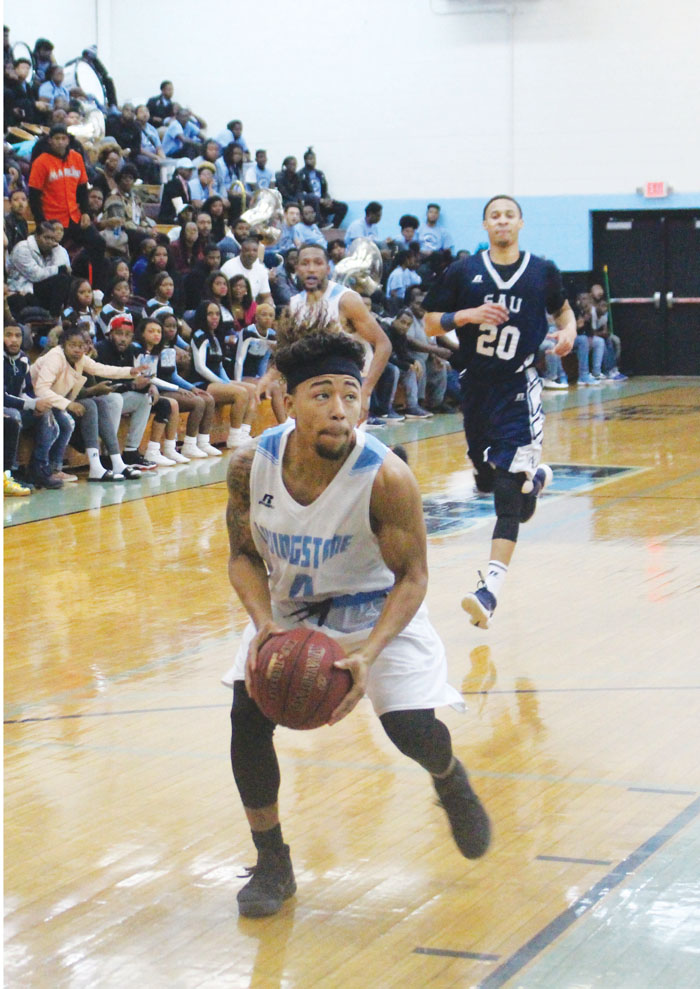 The Blue Bears aren’t there yet — and the latest piece of evidence came Saturday at New Trent Gym, where St. Augustine’s swooped in and confiscated a 75-69 CIAA victory.

“We’re 6-9 and it’s nothing to be proud of,” Stinson said after Livingstone fell to 4-5 in the conference and 1-3 in the Southern Division. “We have to play better. This isn’t anybody else’s dream, it’s our dream. We have to take accountability and make it a reality.”

True, but even Gladys Knight and her Pips know that dreams don’t always come true — and the reality is the Blue Bears have dropped two straight winnable games.

“We’ve got to all buy in and play together,” forward Malik Smith said. “Not just the starting five or the guys on the bench. It’s got to be the whole team. I know we’re way better than what we’re showing.”

They weren’t bad against St. Aug’s (10-11, 7-3, 2-2). Livingstone shot 40 percent from the field and made eight 3-pointers, but played slack defense and never owned a lead. Afterward, frustration was apparent.

“We couldn’t put 40 minutes together,” guard Roger Ray said, after LC slipped to 4-4 this month. “The biggest part of the game was when it was tied late and we got three turnovers in a row. That killed us. It’s the second game in a row that we beat ourselves.”

Don’t blame Ray. The 5-foot-8 sophomore from Raleigh drained four 3-balls and dropped 27 points on the Falcons, just three days after netting a season-high 29 in a gut-wrenching loss at Johnson C. Smith. Teammates Smith and Cameron Burhannon each contributed 13 points apiece while Ramel Belfield went 3-for-5 from long distance and totaled nine points.

“Livingstone’s a tough team,” said St. Aug’s senior Quincy January. “They have an extra edge to them. They hustle and do all the dirty work.”

Which makes Stinson’s situation all the more perplexing. “We have to turn a corner,” he said, “and play a consistent game. Not just one half.”

LC struggled in the early going, falling behind 16-4 before the game was five-minutes old. January (12 points, 11 rebounds) hit a couple of layups and teammates Kasey Bryant and Kenneth Collins buried 3-pointers while the Blue Bears strained to connect the dots.

“You can’t miss open shots or layups, point-blank,” said Ray, who shot 6-for-11 from the floor and converted 11 of 12 free throws. “Our first five possessions, I didn’t give us anything. The first five minutes was all on me. It might have been the reason we never got over the hump.”

Livingstone fought back and tied the score 20-20 when Ray beamed in a 3-ball from the left side midway through the first half.

“I knew Livingstone wasn’t going to quit,” said winning coach MarQus Johnson. “It was like a boxing match. We punched first and they punched back.”

St. Aug’s kept punching and surged to a 35-29 halftime lead, then went up, 42-34, when January converted off a set inbounds play under the basket.

“We started taking good shots, not the shots they wanted us to take,” Johnson noted.

But again LC responded with a charge up the hill, this time when Belfield hit successive 3-pointers to knot the score 46-46 with 10:57 remaining. Four minutes later, Smith completed a three-point play to tie the game for the last time at 54-54.

Perhaps the game’s defining play came with 3:21 to go, when the 6-7 January missed the second of two free throws. Instead of securing the rebound — and trying to narrow a five-point deficit — the Blue Bears lost the rebound to Collins, who hit an open layup from the right post that gave SAU a 66-59 edge.

“You never want to miss two free throws like I did,” said January. “But (Collins) was there. He didn’t give up on the play.”

That’s something Stinson is still preaching to his combat-weary troops.

“For some reason, we’re OK with being mediocre,” he said. “That’s not acceptable. Not here at Livingstone.”

NOTES: St. Aug’s shot 51 percent from the field and out-rebounded LC, 40-29. January shot 6-for-8 from the field and posted his 47th career double-double — and ninth this season. He’s now 13 career rebounds short of 1,000. … Livingstone carries a two-game losing streak into the meat-and-potatoes portion of its schedule. It travels to Elizabeth City State on Monday and hosts Winston-Salem State next Saturday.