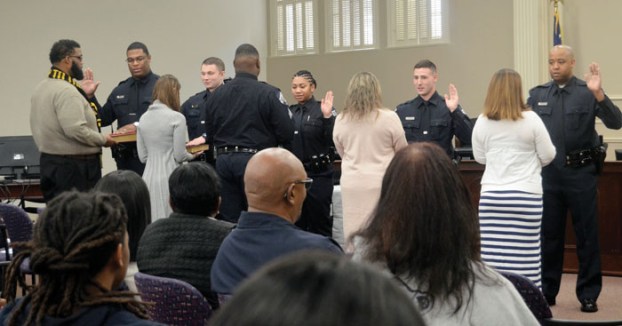 The Salisbury Police Department swore in five officers during a Friday morning ceremony. Many of the officers had family or friends hold bibles as they took the oath of office. Officers left to right are: Scotty Robinson, Trevor Meadows, Jherica Ijames, Joseph Calabro, and Daymond Burch. Shavonne Walker/Salisbury Post

SALISBURY — Five new officers were sworn in by the Salisbury Police Department on Friday morning during a formal ceremony during which they were surrounded by their families, friends, fellow law officers and city leaders.

The addition of the five — Daymond Burch, Joseph Calabro, Jherica Ijames, Trevor Meadows and Scotty Robinson — brings the department’s shortage to just eight. In addition to the five recruits, six other people will begin basic law enforcement training next month.

At its highest number, the Police Department had 21 vacancies, a number that has been whittled down over the past year.

“We certainly had a staffing crunch at the first of last year, and we’ve been working to get our way through,” said Police Chief Jerry Stokes.

He said having the new officers will help with some of the crime-reduction strategies police have been discussing because the plans are dependent upon having enough staff.

Among the five are a former pro football player, a former professional motorcycle racer, the daughter of a U.S. diplomat, and a veteran officer.

“It’s great to see them start off a career in a city that they can really make a difference in,” Stokes said.

“Almost all are local people or who have been in the community for some time, and they really want to make a difference in their community and they want to help,” he said.

Stokes said there are a number of other applicants who have law enforcement experience and who are recent graduates of basic training. He said he’s very confident the department will get to the point of having no vacancies or being shy of the goal by just a few.

Stokes admits it’s taken a while to fill the positions, but he doesn’t plan to hire just anyone or compromise on the department’s standards.

“We are looking for good quality folks like you saw sworn in today, and we feel like we’ve found them and are bringing them on board to help this community,” Stokes said.

The new officers are:

• Daymond Burch, a Salisbury native who graduated from North Rowan High School. He previously was a deputy with the Mecklenburg County Sheriff’s Office and has served in the Marine Corps. He and his wife, Misty, have four children.

• Joseph Calabro, who was born in Rhinebeck, New York, and moved to North Carolina in 2006. He graduated from Hickory Ridge High School and previously raced motorcycles professionally.

• Jherica Ijames, a native of Statesville who says she has always considered herself a native of Salisbury. She graduated from East Rowan High School and attended North Carolina Agricultural & Technical State University, where she earned a bachelor of arts degree in political science.

Ijames says she attributes much of her interest in law enforcement to her mother, who is also a graduate of N.C. A&T and now serves overseas as a diplomatic officer for the U.S. Department of State. She is currently stationed in Pakistan.

• Trevor Meadows was born and raised in Salisbury and is a graduate of Catawba College. He was accompanied by his wife, Megan, who pinned on his badge.

• Scotty Robinson, a Salisbury native who graduated from Salisbury High School and later East Carolina University. He went on to to play for the Cleveland Browns in the NFL. He and his wife, Brittney, have three children.

During the ceremony, friends and family members pinned police badges to the officers’ uniforms.

“Our badge is the symbol of our authority as police officers.  Our badge – and the authority it represents – is bestowed on us not by the Police Department, not by any branch of government, but by the community we serve: so that the badge is also a symbol of our community’s trust in each of us,” Stokes told the group.

Robinson said after the ceremony that he has friends who have been on both sides of the law, “but for me to have an opportunity to come back here and impact this community in this way, it’s a great feeling.”

He said he hopes the relationships he’s built in his hometown will serve him well as a police officer.

“At the end of the day, police work is all about relationships,” he said.

He’s always wanted to return home and have some type of impact, but he didn’t initially think it would be in law enforcement.

Meadows said it wasn’t just one event in his life that led him to a law enforcement career.

“I would say it’s a string of events, growing up in this community, seeing people you know hurt or in poverty and really being able to change that and make changes in lives and a difference,” Meadows said.

He said it’s an honor to be in law enforcement in his hometown.

“I think it makes a big impact because, in all honesty, it’s knowing somebody that you can put a change personally in their lives making a better life for that person or that citizen or that child. They have someone to look up to and that person is you, and you already know them, so it’s a big honor,” he said.