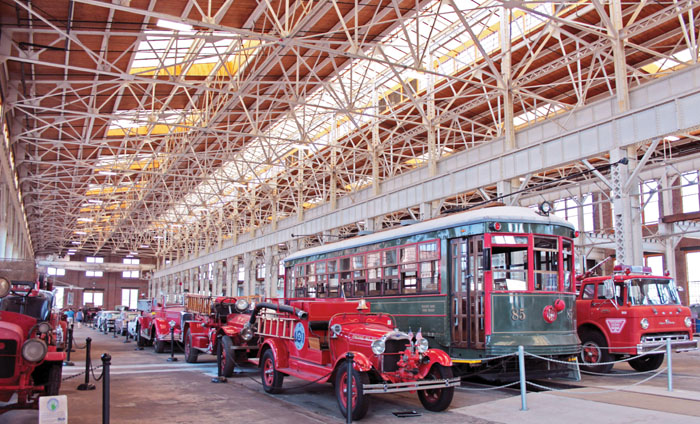 The opening of the Back Shop space in 2017 added 90,000 square feet of exhibit space at the N.C. Transportation Museum. Submitted photo

SPENCER — The N.C. Transportation Museum had its most successful year ever in 2017, with record-breaking visitation, record-breaking attendance for its largest programs and the opening of the Back Shop as an exhibit space.

Together, the successes resulted in an economic impact for Rowan County that exceeds $18 million, according to the Rowan County Convention and Visitors Bureau.

The bureau’s calculations show the museum contributed an $18.3 million economic impact in Rowan County. Accounting for tourism dollars across Rowan, the museum represents 11 percent of the county’s $166 million tourism industry.

“The museum is one of the most integral components of Rowan County’s tourism economy,” said James Meacham, chief executive officer of the Visitors Bureau.  “The site continues to drive new visitation and foster economic activity in the community. It is a great asset and a true Rowan County original.”

For several years, the museum has partnered with the Visitors Bureau to provide incentives for those who wish to stay in the county overnight. They have included free tickets, apparel and discounts in the museum’s gift shop.

“The Transportation Museum is one of our top revenue generators for weekend business,” said Krista Osterweil, manager of the Salisbury Hilton hotel. “Their partnership with the local CVB has been instrumental in creating opportunities for guests of our county to become guests of our hotels.”

The Polar Express Train Ride was a driving force for a record-breaking 2017, attracting more than 52,300 visitors during its 20-night run. Separately, it had a $6.6 million economic impact for the county.

Museum Executive Director Kelly Alexander said the growth of the Polar Express has been driven by satisfied visitors.

“We’ve worked hard to create an event that makes memories for the whole family and keeps them coming back each year,” Alexander said. “That, of course, results in even more interest as visitors talk about the Polar Express Train Ride to their friends and on social media.”

Other events, new exhibit spaces and donations also contributed to a banner year in 2017.

The museum saw its highest ever paid visitation during Day Out With Thomas and hosted more than 5,000 people for the annual Fire Truck Festival.

Day-to-day visitation was boosted by the opening of the Back Shop, which has 90,000 square feet of exhibit space. This allowed the museum to show off more of its auto collection, including five newly donated vehicles from the 1930s like a 1935 Packard Super Eight and a 1933 Rolls Royce 20/25.

Ticket sales from special programs and day-to-day visitation keep the Transportation Museum operating, with just 11 percent of its funding coming from state appropriations.

“We couldn’t have a year like this without an extraordinary effort from our employees, our partners and the museum’s amazing army of talented volunteers,” Alexander said.

The N.C. Transportation Museum is online at www.nctrans.org and can be found on social media by searching @nctrans.

Spencer moves on to Phase 2 study for Park…