The Pro Bowl: It’s become a gathering place for the brokenhearted 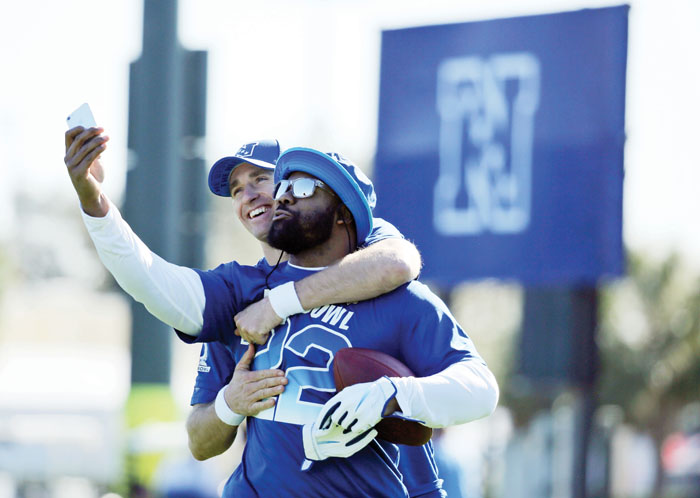 He’s talked about it with family and friends for nearly a month and openly shared his thoughts with fellow Pro Bowl players this week.

At breakfast. In the locker room. On the practice field.

After all, the New Orleans Saints, Minnesota Vikings and Jacksonville Jaguars know exactly how Mosley feels.

Players from all those teams are still trying to deal with the way they exited the postseason.

“You talk about it because that’s the life of the NFL,” Mosley said Thursday. “You fight and fight, and it always comes down to the last two minutes or the last play of the game.”

The Pro Bowl has become a gathering spot for the brokenhearted, a place to laugh, smile and joke through lingering disappointment.

“When it’s the last game of the season, it definitely sticks with you a lot longer,” Mosley said. “It was tough, but you’ve got to live and learn from it. It just builds calluses, as Coach (John) Harbaugh says, and you try to redeem yourself next season.”

The Ravens looked as if they were headed to the playoffs in the final minute of the final game of the regular season. But Baltimore gave up a crushing, 49-yard touchdown pass with 44 seconds remaining and lost 31-27 loss to Cincinnati. The outcome put Buffalo in the playoffs for the first time since the 1999 season.

“I know they helped us out, but to have pretty much a home playoff game and lose to a team that’s not having a good year, that’s difficult,” Bills guard Richie Incognito said.

Incognito and other Pro Bowlers felt as if Baltimore’s stunning setback took a backseat to others in the playoffs.

New Orleans was poised to beat Minnesota in an NFC divisional game until Case Keenum completed a last-ditch heave to Stefon Diggs, who turned it into a 61-yard touchdown reception that gave the Vikings a 29-24 victory. Rookie safety Marcus Williams whiffed trying to tackle Diggs near the sideline.

“That’s tough to go and do that,” Incognito said. “You’re in and out of it in a game like New Orleans-Minnesota and then you lose it on the last play. That’s just demoralizing. That’s going to be in that kid’s head forever.”

It dominated conversation in Minnesota for a week — until the Vikings got thumped at Philadelphia while trying to become the first team in NFL history to make the Super Bowl in its home stadium.

“That’s why you keep doing things like this, try to enjoy the moment, live in the moment and actually try to get that game off your mind,” Vikings cornerback Xavier Rhodes said.

“I can’t tell you how long it’s going to take, but it’ll take very long if people keep asking me questions about the game. But eventually it’ll pass.

“We’ve got to look forward to next year and hopefully we’ll go to the Super Bowl.”

“You have that miracle catch and that happens in the NFC title game,” McCoy said. “That hurts. I think they just couldn’t get over the fact of how they won and it just didn’t carry over to the next game.”

Jacksonville will carry its collapse into next season, too.

The Jaguars had a 10-point lead at New England in the fourth quarter in the AFC title game. Tom Brady and the defending Super Bowl champs were so desperate to get back in the game that they turned to trick plays.

“You’ve got the champs on the ropes, everything’s flowing, you feel like you’re going to win the game, you’re out-physically them and then Tom Brady takes over,” Incognito said.

Incognito and several Jaguars defenders talked about the loss during breakfast this week, with Incognito identifying the session as “telling war stories about Tommy.”

All of them — the Jaguars, the Vikings, the Saints and the Ravens — could take solace in knowing it could be worse. The Atlanta Falcons blew a 28-3 lead to the Patriots in the Super Bowl last February.

“It’s takes a while,” Falcons safety Keanu Neal said. “You’ve got to forget, just get right. It takes a second. It’s going to hurt because the opportunity was there, but time heals everything.”