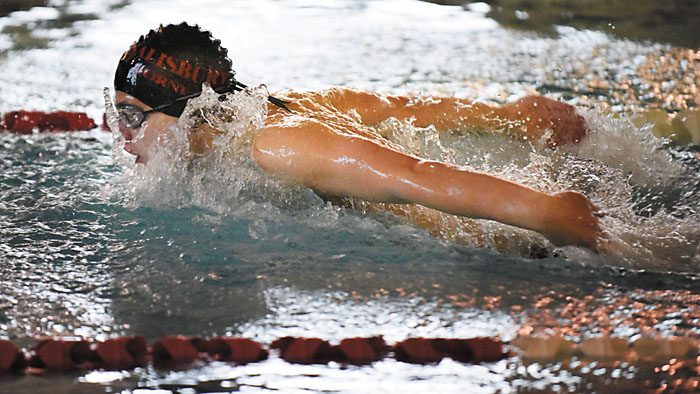 SALISBURY  — Snow forced the rescheduling of the Central Carolina Conference Championships, originally set for last Saturday, to Thursday night. For Salisbury and South Rowan that meant a draining period of less than 24 hours in which they would compete in their two biggest meets of the regular season.

Salisbury’s boys finished second to North Davidson in the nine-team CCC meet in Winston-Salem, while South finished fourth. On Friday afternoon at the Hurley YMCA, they resumed their battle after a very brief rest. Salisbury (335 points) held off the Raiders (285) and repeated as Rowan County champion.

“I know I got home from Winston-Salem at 11:45,” South coach Jarrod Smith said. “That meet on Thursday night probably was a factor in us starting out a little slow today. But we were coming on really at the end, and we tightened things up. We made a good run at it.”

Knorr broke his own meet records in the 200 IM and 500 freestyle and swam on record-breaking 200 medley relay and 400 free relay teams.

“I really wanted to swim faster times than I did in my last county meet,  but we did set some records,” said Knorr, who already has been county swimmer of the year three times.

Burton also was on those two fast relay teams and added wins in the 50 and 100 freestyle sprints. While both earned maximum points, Knorr was named MVP because he was the senior.

Salisbury got a victory in the 100 butterfly and a second in the 200 IM from Roshen Amin. Keegan Dillon contributed seconds in the 100 freestyle and 100 breaststroke.

“Despite everything, despite the adversity, I thought our kids really showed up today,” Salisbury coach Ryan Starrett said. “I know they were really tired, and it was a tough situation, but it’s not like we could rest them.”

South challenged. Smith thought that the Raiders might surprise people. They had numerous season-best swims on Thursday night, and even with the fatigue factor, adrenaline kicked in and momentum carried over.

Blaise Bumgarner led the charge for South. He won the 100 backstroke, was a close second in the 200 freestyle and swam on two strong relay teams.

Cameron Hurd was seeded third but won the 100 breaststroke. He was part of South’s late surge.

Christian Reynolds, Noah Severt, Bumgarner and Hurd won the 200 free relay for the Raiders. Reynolds, a football star, added a second and a third in individual races.

Carson got a win from youngster Matthew Epley in the 200 freestyle and finished third with 238 points.  Fourth-place West Rowan (111) got a second-place effort from Matthew Gouge in the 500.

But Salisbury had Knorr and Burton and the necessary depth to win again. Dillon, Amin and Joe Steinman contributed to record-breaking relay teams.

“Those relays were definitely the highlight of the day,” Knorr said. “We were fast.”

Counting boys and girls, Salisbury swimmers now hold 14 of the 22 county records. Moving forward, the Hornets have a chance to do very well  in the regionals and the state.

“We’ve got a lot of good swimmers,” Starrett said. “And the really important stuff, the end-game stuff, that’s coming up.”