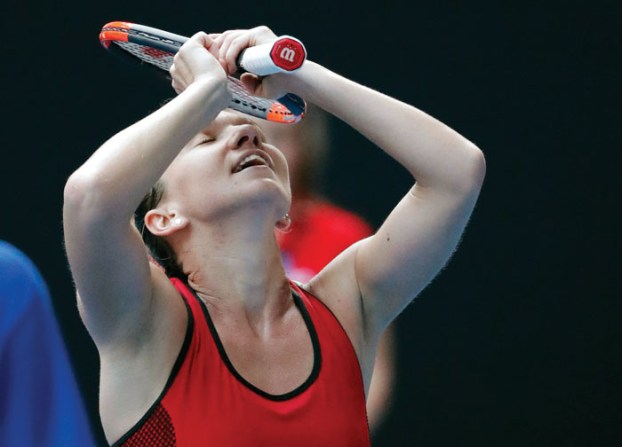 Germany’s Angelique Kerber rests on the court after winning a point against Romania’s Simona Halep during their semifinal at the Australian Open tennis championships in Melbourne, Australia, Thursday, Jan. 25, 2018. (AP Photo/Dita Alangkara)

Kerber’s competitive qualities almost compensated for that sinking feeling after succumbing 6-3, 4-6, 9-7 to top-seeded Simona Halep in a gripping semifinal struggle.

The 2016 champion didn’t lose the match — she forced Halep to win it after a gritty comeback that nearly launched the German lefthander into another Saturday night final at Melbourne Park.

And this comeback after trailing a set and a break wasn’t manufactured against some ranking underling. It was a sustained counter-offensive against the No. 1-player seemingly in control of the contest.

“My heart was on the court, that’s the most important thing for me,” Kerber said. “Of course, I’m a little bit sad, but I’ll go with a good feeling back home.”

Trailing 3-1 in the second set, Kerber won five of the next six games for 6-4.

Even when Halep served for the match at 5-3 in the third set, Kerber refused to yield and saved two match points on serve in the 10th game of the heavy-hitting duel that featured several long rallies and creative shot-making.

Such was Kerber’s zest to keep the match alive that she eventually saved 13 of 22 break points on serve. She took advantage of every one of her seven breakpoint opportunities, including three in the third set, to maintain the pressure. And she made 16 fewer unforced errors. But the crushing weight of serving second in the tense third set just to stay alive eventually took its toll.

While Kerber rued two squandered match points when serving for the match at 6-5, it seems she’s back on track after the 2017 slump when she reached only one singles final and slid from No. 1 to a year-end No. 21.

Of those match points, Kerber said: “She played good, I could do nothing. I tried my best in the moment and she won those points.”

It was Kerber’s first loss after a string of 14 singles victories in Australia this month — four at the Hopman Cup in Perth, five to sweep to the title at the Sydney International and five in the impressive run to the last four in Melbourne.

She was the last major winner still in contention in the women’s draw after she beat Maria Sharapova in the third round.