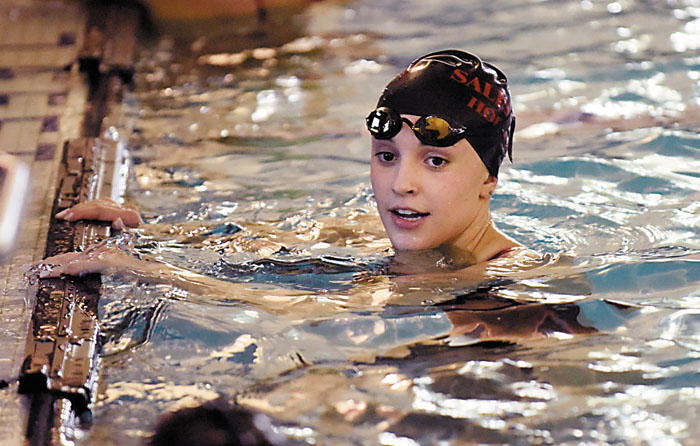 Wayne Hinshaw/for the Salisbury Post ... Salisbury’s Kathryn Morrison (both photos) was late for warmups but went on to win the 100-yard butterfly, during the Rowan County championships Friday afternoon at the Hurley YMCA.

Pittman frowned. She counted again. Again, she got 27, and her math skills are pretty good.  Someone was missing. “OK, who’s not here, she demanded?”

“Kat’s not here,” someone said. Twenty-six other Hornets agreed. Pittman tried not to scream.

So where was Kat?

It turns out she was still in her fourth-period class, dutifully taking a math quiz. She hadn’t heard the announcement releasing swimmers early from classes. Pittman frantically called the school, someone located Morrison, and they sent her on her way to the Hurley YMCA.

“I was running pretty late, and I’m thinking, “I’m going to miss the county meet my senior year,'” Morrison said, shaking her head. “I was freaking out for a little while, but then I got there.”

“Hey, nice of you to show up,” teased Ethan Knorr, the standout for the Salisbury boys team.

Once Morrison got in the water, no problem. Same ol’ Morrison. Two individual wins and two relay wins.

The tone for the meet was set immediately. Salisbury got the day started with a county record clocking in the 200 medley relay. Emily Knorr and Katie Knorr, freshman twins who are rockets in the water, started things off.  Then Morrison and Mary Kaufmann took it home.

“We knew what all the meet records were because (Salisbury boys coach) Ryan Starrett had texted them to us,” Morrison said. “We had planned to break records.”

The Hornets were dealing with two obstacles. First, there was disappointment. Their string of four straight Central Carolina Conference championships had been ended  Thursday night in Winston-Salem by league newcomer North Davidson, a 4A school last year. The Hornets were also weary. Most of them had gotten home from the CCC meet (rescheduled because of the snow) after 11 p.m. Now it was Friday afternoon, and they were right back at it, competing in an electric environment against their biggest rivals.

“I know not winning the conference was disappointing for all of them, especially for the seniors, but they did a good job of bouncing back from that,” Pittman said. “And I know they were tired.  They had to be exhausted because I’m exhausted. That was a long meet on Thursday night. I was on the pool deck six hours.”

Morrison won her two specialties, cruising in the 100 butterfly and  breaking her own meet mark in the 100 backstroke. Besides swimming on the record-setting 200 medley relay, she teamed with Kaufmann and the Knorrs again to close the meet with a county-record time in the 400 freestyle relay.

The Knorrs also had perfect days. Katie won the 200 IM and 100 breaststroke. Emily won the 200 freestyle and broke the county mark in the 500 freestyle by more than four seconds. East Rowan’s Anna Weaver had set that mark in 2005.

South was dealing with the same fatigue issues as the Hornets, but Holiday Harvey led the Raiders to second place. She edged Carson’s Olivia Shorter in the 50 freestyle race. Harvey was second in the 100 breaststroke and anchored the second-place 200 free relay team.

Taylor Sever won the 100 freestyle for Carson and was part of the Cougars’ winning 200 free relay team.

Brenna Culp paced East. She had second places in the 200 IM and 100 backstroke and was part of the second-place team in the 200 medley relay.

But mostly the day belonged to the Hornets, Not just Morrison and the Knorrs, but Kauffman, Meredith Burton, Leah Cressler, Anna Patel and Phoebe Hollingsworth. All of them piled up points.

“Swimmers like me and the Knorr family, we do this year-round,” Morrison said. “My teammates tell me we’re amazing, but the girls and guys that play those other sports and then come out here and swim like this, I think they’re the amazing ones. They run cross country, they play football, they play tennis, but then they swim so hard. We were all tired today, but more excited than tired. My last county meet is bittersweet, but I’ll remember we broke records and we won a championship.”