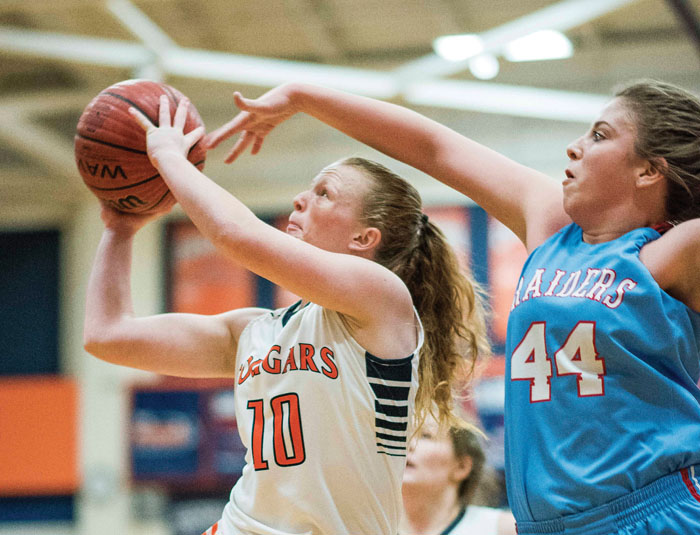 CHINA GROVE — There are likely several more showdowns on the horizon in the competitive North Piedmont Conference girls basketball race but the North Iredell Raiders have a firm upper hand for now.

The visiting Raiders used superior size and a disruptive defense to hand the Carson Cougars a key 57-49 loss Friday night, maintaining a firm grip on the top spot in the NPC. A share of first place was on the line for both teams but North (16-3, 4-1 NPC) prevailed to stay tied with West Rowan. North already owns a win over West with another game looming against the Falcons next week.

Carson (16-3, 3-2 NPC) went from a tie for first all the way down to fourth in the tight league race at the halfway point. Both NPC losses this season have been to North Iredell. They now trail North, West Rowan and Statesville in the standings with five league games left.

“There is still a lot left to play for,” disappointed Cougars’ coach Brooke Stouder said afterwards. “Our girls are disappointed because this was a big game with a lot of implications in the conference. We have just got to move on, make adjustments, and mentally stay focused for the entire game.”

“She is just that type of player,” veteran Raiders’ Coach Roger Bumgarner said of Liles, noting she is now 17 points away from 1,000 career points. “It was hard to get the ball to her against the box-and-one, but our other girls stepped up. We were patient and made some quality shots. We were fortunate to come out of here with a win, but our girls really played well.”

Carson suffered through some poor shooting in the middle part of the contest and trailed, 41-29, as the fourth quarter opened. But the Cougars had one final rally to get back in the game on four quick points by McKenzie Gadson, and a steal and layup by Lani Isley. When Olivia Gabriel drained a 3-pointer with 2:55 left, the Cougars were suddenly within 45-41 and had momentum. Then it fell apart.

“That was a crucial point in the game, when we cut into the lead,” Stouder said. “Then we made three or four just critical mistakes that really hurt us.”

Gabriel hit a pair of threes and a layup down the stretch as part of her 11-point fourth quarter, but Liles scored twice inside for North. Then the Raiders drained 8-of-9 foul shots down the stretch to pull away.

Free throw shooting and rebounding superiority were the key factors for North Iredell. The Raiders hit 12-of-16 foul shots while Carson made an uncharacteristically poor 3-of-10 from the stripe. North enjoyed a 20-9 rebounding edge by halftime and ended with a decisive 35-17 edge, many of them offensive rebounds.

Junior forward Mackie Allen followed Liles with a double-double of 15 points and 15 rebounds for the winners, while 6-1 forward Rachel Lalonde added 14. Gabriel was the only Cougar in double figures. Colbie Perry scored nine points on three treys and Gadson added eight points, six below her average.

The Cougars face a three-game gauntlet next week with East Rowan on Tuesday, West Rowan on Wednesday and a trip to Statesville next Friday.  “We are very much in this race,” Stouder said. “There are some very good teams in this league and on any given night, anyone can win.”