Barker family rebuilds after losing all possessions in fire 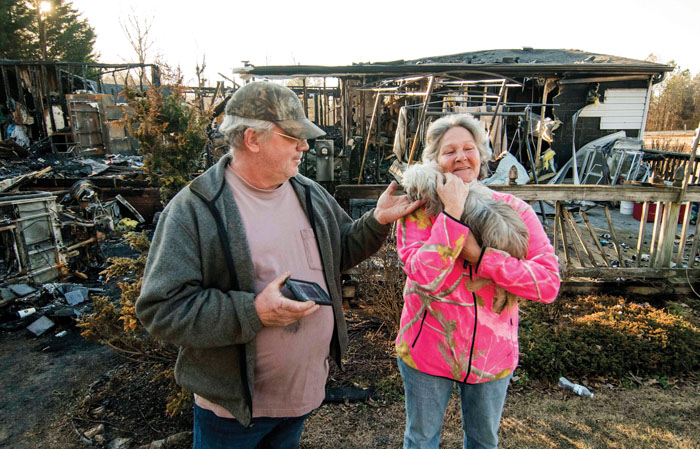 On Monday, Doug and Lori Barker's home was destroyed by a fire. The family has been overwhelmed by the generosity of friends and complete strangers that have offered to help them with basic needs from toothbrushes and clothes to a camper and port-a-john. Lori holds her dog Pita, who went missing during the fire and came home the next day. Jon C. Lakey/Salisbury Post

SALISBURY — When the Barker family’s house caught fire Monday afternoon, they lost nearly everything they owned.

But without the help of one of their dogs, the loss could have been much worse.

When the fire started, she was putting things away in the back closet. Her husband, Doug Barker, described that closet as “probably as far away from the back porch as you can get.”

The back porch is where the fire started.

“And she just started barking, and I go, ‘What’s the matter, Pita?’ And I came out and I heard something on the deck and I thought (Doug) was home,” Lori said. “And so I went and I looked at my phone and I said, ‘That ain’t Doug.’”

Doug and his son, Damien Barker, get off work in Cornelius and Concord about 3:30 p.m. each day. It was about 3:40 p.m. when the fire began.

“I said, ‘I better go see what the heck is going on out here,’” Lori said.

When she first saw the flames, they looked small enough to put out with the family’s garden hose, she said.

But by the time she’d unraveled the knots in the hose, the flames had engulfed the back porch.

“And I had to run around here and my son (Darren Middelstadt) was in his back bedroom. And I said, ‘Get the dogs! Fire, fire!’” Lori said. “You could hear it crackling across the rooftop and the black smoke was just coming and I told Darren, ‘Come out now!’”

Within an hour, the home that Lori and Doug had lived in for 17 years was destroyed. JON C. LAKEY / SALISBURY POST On Monday, Doug and Lori Barker’s home was destroyed by a fire, but the Bibles survived. Thursday, January 25, 2018, in Salisbury, N.C.

But Damien said the Barkers consider themselves lucky because not one of their three dogs, two horses or five household residents was injured.

Darren, Lori, Doug, Damien and Damien’s son, Logan Barker, lived in the house. Lori and Doug’s other son, Brandon Barker, lives in a camper near the house.

In the days since the fire took everything but the clothes on their backs, the Barkers say they have received an outpouring of support from their neighbors and the community at large.

Doug said he would guess the family lost about $200,000 in the fire, not taking into consideration all the possessions with emotional value that couldn’t be rescued from the flames.

“Everybody’s donated and helped,” Damien said. “So many people have come out, and it’s been a blessing really to see everybody together in the neighborhood just coming together.”

Doug said that for three days straight there was a “steady line” of people coming to the house to drop things off.

“They’d leave and two more would come in,” Doug said. “One of the guys that works for me is a mechanic. He called last night and said he was bringing that (camper) whether I wanted it or not.” JON C. LAKEY / SALISBURY POST On Monday, Doug and Lori Barker home was destroyed by a fire. The family has been overwhelmed by the generosity of friends and complete strangers. Thursday, January 25, 2018, in Salisbury, N.C.

The camper has become the Barker family’s temporary home. Damien said it’s where the family will likely stay until their house is rebuilt.

Damien said that because he, Doug and Brandon work in construction, he anticipates they will be able to rebuild the house within a year.

In the meantime, Damien said the family will push on.

“It’s just like a dream. You’re hoping to wake up from a nightmare,” Damien said. “But we’ll rebuild. We’re a strong family.”

For anyone who wants to help the Barkers, they ask that you not send clothes or toiletries. Instead, they said, Visa gift cards of any amount would be appreciated. The family hopes to buy a generator so they can pump water from their well to use in the camper.

Lori said she also hopes people will donate to the American Red Cross.

“People … have come here and said they’re afraid to donate because they didn’t know where the money went,” Lori said. “This is what they do. They’re here to help people in these kinds of situations.”