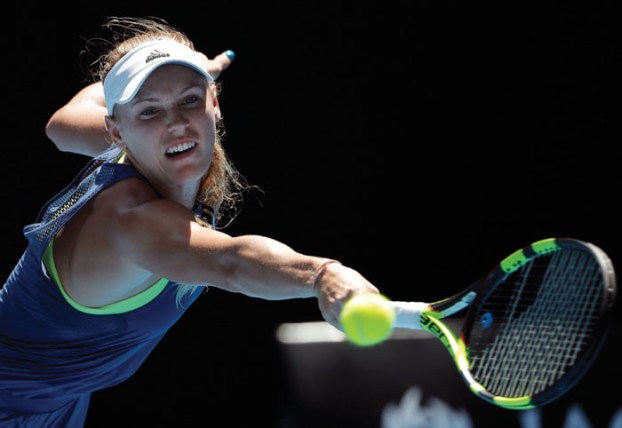 MELBOURNE, Australia (AP) — Caroline Wozniacki was able to control her nerves this time, reaching her first Australian Open final seven years after squandering a match point and losing in her only previous run to the semis at Melbourne Park.

Former No. 1-ranked Wozniacki is potentially one win away from a breakthrough Grand Slam title after advancing 6-3, 7-6 (2) over Elise Mertens on Thursday.

It’s her first Grand Slam final anywhere outside of America, where she lost U.S. Open finals in 2009 (to Kim Clijsters) and 2014 (to Serena Williams).

Wozniacki appeared to be coasting against the 22-year-old Mertens, getting breaks in the middle of each set. But she began getting tight when she was serving for the match at 5-4: From 30-15, she double-faulted twice and Mertens passed her with a forehand winner in between to level the set at 5-5.

The No. 37-ranked Mertens lifted her intensity, holding her serve at love and then having two set points in the next game before Wozniacki eventually held in a serving game lasting 8 ½ minutes.

Wozniacki dominated the tiebreaker, putting memories of her last Australian Open semifinal behind her — she had match points against Li Na in the semifinal in 2011, but was unable to convert.

“It means so much to me. I got really tight at 5-4. I kind of felt my head against the wall,” Wozniacki said. “I knew I had to try and stay calm.

Mertens, who trains at Clijsters’s academy in Belgium, was appearing in the semifinals on her debut at Melbourne Park and in just her fifth Grand Slam tournament. She had won 10 matches in as row after successfully defending her Hobart International title two weeks ago.

She took out No. 4-seeded Elina Svitolina in straight sets in the quarterfinal but was struggling to match a consistent Wozniacki until late in the second set.

Wozniacki’s win moves here a step closer to potentially regaining the No. 1 ranking, a position she hasn’t held in six years.

No. 1-ranked Simona Halep was playing two-time major winner Angelique Kerber later Thursday in the second of the semifinals.

MELBOURNE, Australia (AP) — Roger Federer got cranky at the chair umpire for a technology flaw in his Australian Open quarterfinal match, using the rare emotional outburst as motivation.

It helped. The 36-year-old Federer, now the oldest semifinalist in Melbourne in 41 years, beat long-time rival Tomas Berdych 7-6 (1), 6-3, 6-4 Wednesday and will next face a challenge from the next generation.

That will be against 21-year-old Hyeon Chung, the first South Korean to reach a Grand Slam semifinal and the youngest to reach the last four at a major since 2010.

Federer’s victory extended his winning streak to 14 in Australian Open quarterfinals and to nine in a personal rivalry with Berdych that dates back to 2004. The 19-time major champion leads that head-to-head contest 20-6, including all five meetings at Melbourne Park.

He hadn’t let up in upset wins over No. 4 Alexander Zverev or six-time Australian Open champion Novak Djokovic, but he let his guard down in the last game against Sandgren and needed six match points to finish it off.

In an on-court interview, he introduced the audience to his parents and his coach, and took the microphone to speak in Korean to millions of new tennis fans back home.

“I think all the people is watching Australian Open now,” he said.

The 58th-ranked Chung is the lowest-ranked man to reach the Australian Open semifinals since Marat Safin in 2004.

With Chung already through, and Kyle Edmund playing No. 6 Marin Cilic in the other half of the draw, it’s the first time since 1999 that multiple unseeded players have reached the Australian Open semifinals.

Federer has been keeping an eye on Chung’s progress.

“To beat Novak on this court is particularly difficult. … He’s incredibly impressive in his movement, reminds me obviously a lot of Novak,” Federer said. “He’s clearly got nothing to lose. I will tell myself the same and we’ll see what happens.”

Chung, who won the inaugural Next Gen ATP Finals title in November, was too consistent for Sandgren, a 26-year-old American who had never won a match at a Grand Slam tournament or beaten a top-10 player until last week.

The women’s semifinals were determined earlier Wednesday, when top-ranked Simona Halep recovered from an early break to win nine straight games in a 6-3, 6-2 win over No. 6 Karolina Pliskova, and 2016 Australian Open champion Angelique Kerber routed U.S. Open finalist Madison Keys 6-1, 6-2. In the other semifinal match, No. 2 Caroline Wozniacki will play 22-year-old Elise Mertens.

Halep, a two-time French Open finalist, has had a tough road — having to save match points in a third-round win over Lauren Davis that finished 15-13 in the third — to reach the semifinals at Melbourne Park for the first time.

Kerber, the only major champion still in contention, is riding a 14-match winning streak.

She won the Australian and U.S. Open titles two years ago and reached the No. 1 ranking, but slipped into the 20s last year. She didn’t win a title between the 2016 U.S. Open and the Sydney International earlier this month.

“I am just trying to find the feeling back that I had, like 2016,” Kerber said, “and just enjoying my time.”

Staff report SALISBURY — Catawba’s men’s basketball team gave its best effort of the season on Wednesday, but in a snake-bit,... read more