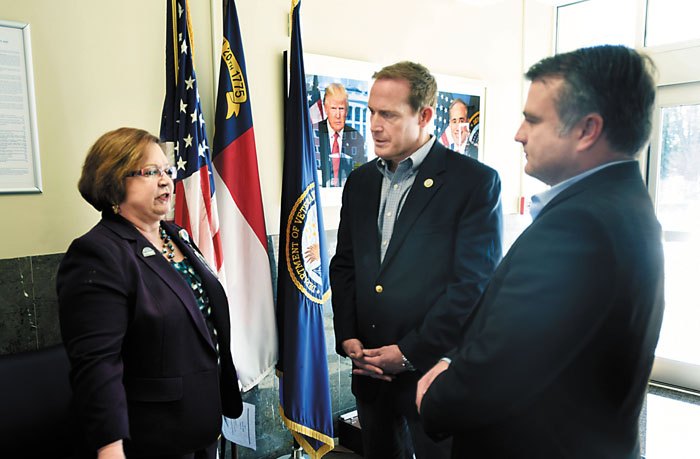 As congressmen returned from Washington for a district workweek, Rep. Ted Budd has been keeping busy.

Budd, a Republican, represents North Carolina’s 13th District, which includes parts of Guilford, Davidson, Davie, Iredell and Rowan counties. He’s been making the rounds since his return to North Carolina early this week.

From there, he visited the Salisbury Veterans Affairs Medical Center to tour the community living and hospice centers.

Recent changes to the VA have been many: the addition of a parking deck for patients and visitors and a valet service for patients visiting Building 2, to name a few.

The work includes improving the telephone answering and response rates and implementing measures suggested by clients and staff, such as a walking track known as “The Blue Loop.”

“This is really very important,” said Budd. “There’s tens of thousands of patients that come through here. We wanted to meet some of them if we could.”

Budd said he particularly enjoyed speaking with a 92-year-old veteran who served in the South Pacific. Another rewarding conversation, he said, was with a hospice patient near the end of his life.

Budd noted that the House last year passed a military construction and Veterans Affairs appropriations bill that provide a much-needed increase in the level of funding for the Department of Veteran Affairs.

“We need Democrats to come along and join us,” Budd said. “We’ve passed them. We know we want to fund our military. We want to give those who have served with us, the veterans, we want to give them the care that they deserve.”

“If we can get the Senate to take up our appropriations bill, we’d be set.”