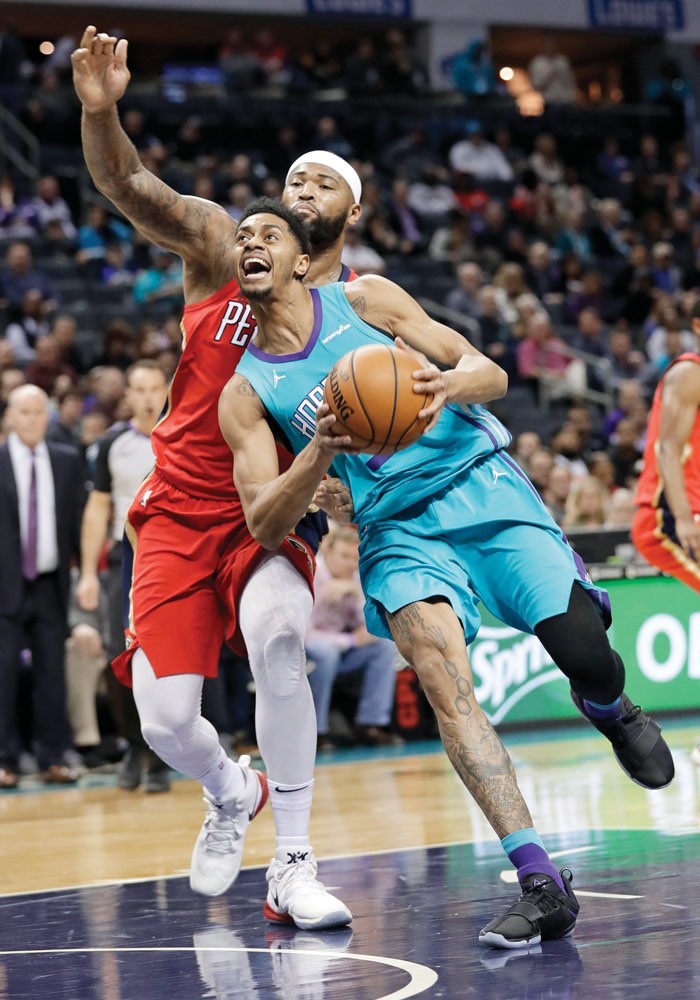 CHARLOTTE (AP) — DeMarcus Cousins told Jrue Holiday it was time to take over.

Holiday did just that, scoring 19 points — including two baskets off drives on back-to-back possessions in the final 2 ½ minutes — to propel the Pelicans to a 101-96 win over the Charlotte Hornets on Wednesday night.

Davis scored 19 points and DeMarcus Cousins had 16 points and 13 rebounds as New Orleans won for the sixth time in seven games.

Cousins said he noticed late in the game that Hornets center Dwight Howard would not leave him to help, so he urged Holiday to take his man 1-on-1, knowing there would be nobody to help on defense.

“That’s their rim protector, that’s the guy to clog up the paint for them,” Cousins said. “You can tell his main concern was to make sure I didn’t score. He wanted it to be a tough night for me offensively and we just kind of took advantage of it. I noticed it and I told Jrue ‘the paint was wide open.’ Jrue’s a big guard. I don’t think anybody in the league can guard him 1-on-1 and I told him ‘just take advantage of it.’”

“The one thing Demarcus kept saying to us was that we have to have the guards drive it because Dwight would not leave my body,” Gentry said. “Because Demarcus has the range to shoot 3s, he stayed into his body so Jrue was able to turn the corner and get to the basket.”

Howard had 22 points and 16 rebounds in his 1,000th career game to lead the Hornets, who fell to 2-2 on the five-game homestand.

With 2:14 left, Holiday drove left through the lane and a made a tough contested shot over Nic Batum to give New Orleans the lead. After a turnover by the Hornets, Holiday took Michael Kidd-Gilchrist to the hole and scored again.

Batum answered with a 3 from the wing to cut the lead to one with one minute remaining — but that was as close as the Hornets would get. Holiday and Davis both made a pair of free throws to push the Pelicans’ lead to four before Kemba Walker turned the ball over on a poor entry pass with 10 seconds left, sealing Charlotte’s fate.

Pelicans: Jameer Nelson had two big 3-pointers early in the fourth quarter to give the Pelicans a boost.

Hornets: Howard is battling for the league lead in technical fouls with 10, one behind Golden State’s Draymond Green, who has 11. … Walker became only the second Hornets player with 900 career 3-pointers. The other is Dell Curry (929). … NBA Hall of Famer David Thompson was on hand for the game.

HOWARD’S LONGEVITY: Hornets coach Steve Clifford said one of the reasons Howard is still playing at a high level in his 14th season is how well he’s taken care of himself.

“It’s easy to forget this is a guy that had had significant injury issues,” Clifford said. “He had major back surgeries last year in Orlando and he’s had a knee problem since he was in high school, so it just speaks to how badly he wants to keep playing at a high level.”

DISAPPOINTED FOR DRUMMOND: Howard said he was disappointed to see Detroit’s Andre Drummond was left off the All-Star team despite averaging an NBA-best 15 rebounds per game.

“He is playing unbelievable basketball,” Howard said. “Fifteen rebounds is a lot of rebounds. When I came into the league 13 was the highest and for a guy to have 15 or rebounds every night and not be in the All-Star game was disappointing.”

KEMBA NO CALL: With less than a minute to play, Walker drove to the basket but didn’t get a call. It turned out to be a crucial play.

“It’s a judgment call, but there was definitely contact on that drive,” Clifford said.