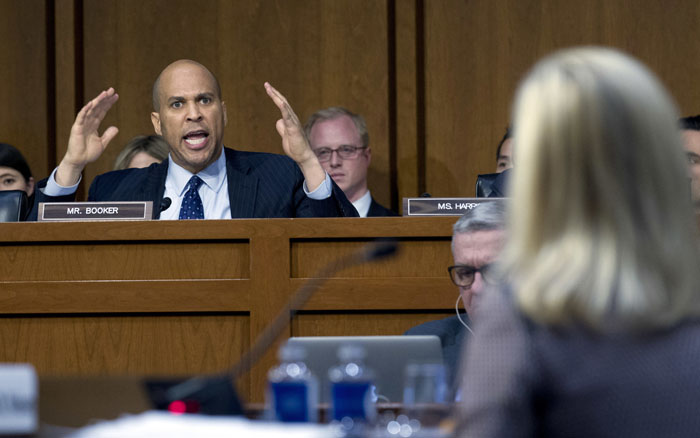 Anybody who watched the clumsy histrionics of Sen. Cory Booker, D-N.J., at last week’s Senate grilling of Homeland Security Secretary Kirstjen Nielsen had to feel a little sorry for him.

His overacting was on full display before the Senate Judiciary Committee and TV cameras. Booker posed, pretended, preened and generally made a fool of himself shouting at Nielsen about President Donald Trump’s latest inexplicable comments regarding immigrants from certain parts of the world. In releasing his almost-comical wrath, Booker’s performance was so awful and cringe-worthy that I actually felt embarrassed for him. He even copped to weeping “tears of rage.” The pain and drama of it all was just too much. And it’s only January. The first presidential primary is more than two years away.

Booker’s rant is only an early taste of many more to come from an increasingly clamorous field of Democratic presidential hopefuls. The Democratic Party is lurching irreparably to the left and has nothing to offer voters in 2020 other than outrage over Trump’s latest tweet and the resuscitation of tired policies that would return a booming U.S. economy to the stagnant Obama years.

It’s too bad Nielsen couldn’t have punctuated Booker’s rant with a well-played stage yawn, giving his self-serving jeremiad the treatment it deserved. Over the next two years, more Cabinet officials will be testifying before Congress and the Democratic Outrage Machine will pounce with their rehearsed lines and faux outrage.

Pro tip to the unlucky witnesses: Bring reading material. You may be there a while. And, when pressed for a response, be ready with an appropriate line, such as, “I’m sorry. Was there a question in there?” Learn to swat imaginary flies and squint as if you notice a spider on the head of the inquisitor.

Anyway, Booker may have been the most wincingly awful to watch, but he is by no means the only Democratic White House hopeful jockeying to position himself or herself as the most liberal, the most outraged, the most synthetically sincere of 2020 contenders. Booker’s pinwheel-eyed fulmination takes its place alongside similarly shameful rants from Sens. Bernie Sanders and Elizabeth Warren, Democratic National Committee Chairman Tom Perez and other liberal one-uppers stumbling over themselves to prove their anti-Trump bona fides.

They may think they’re feeding their Democratic base — after all, social media has turned anti-Trump outrage into an industry — but there are two problems with this assumption. First, even the most rabid anti-Trumpists want substance from their Democratic candidates, and Booker and others have produced none. Second, in their lemming-like scramble to the fringe, Democrats are abandoning the sensible center, where most Americans live and the position from which they wish their lawmakers to govern.

For months, I have written about the Democratic Party’s dangerous lurch to the left. Beginning with support for the Sanders-backed promise of universal health care, Democrats are now in the position where the only way they can distinguish themselves and prevent an onslaught of attacks from their progressive base is to take on and embrace increasingly polarized leftist positions and a continuing stream of anti-Trump venom. Even the liberal New York Times has taken note with the recent headline on an article by Sheryl Gay Stolberg, “Senate Democrats Make Hard Turn Left in Warming Up for 2020 Race.”

The fact that Democrats are abandoning any notion of compromise and refusing to appeal to independent and moderate voters should come as no surprise. The party has been hijacked by radical voices from within, and what we are seeing now is only the beginning of what is to come.

Rogers is a political consultant and a veteran of the Ronald Reagan and George H.W. Bush White Houses and several national campaigns.