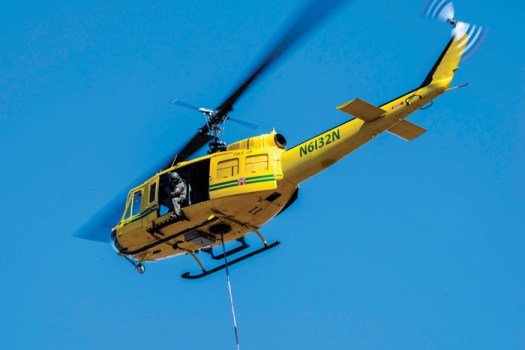 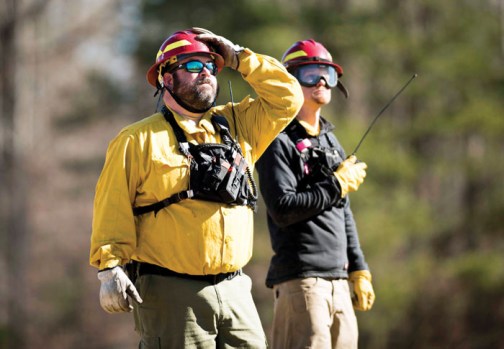 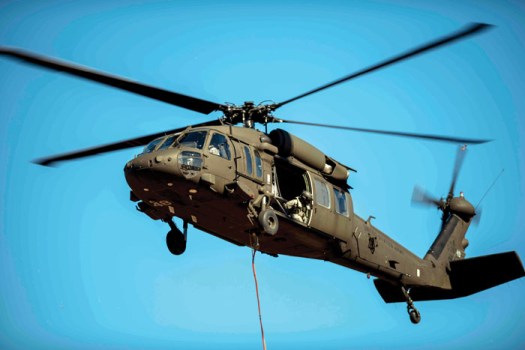 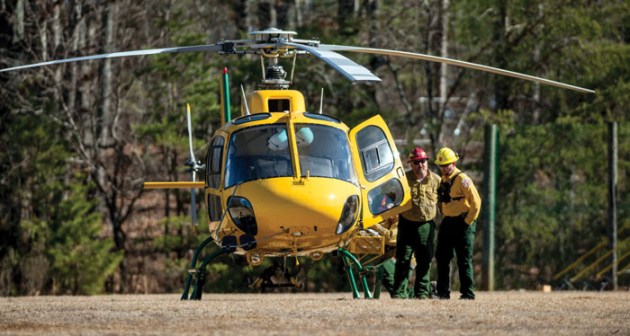 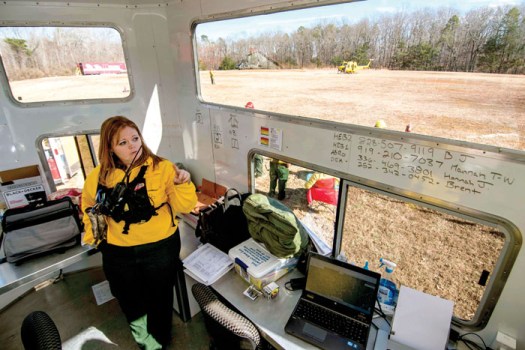 BADIN — As preparation for a prescribed fire of more than 100 acres, the Black Hawk helicopter from the N.C. National Guard unit in Salisbury repeatedly made a circle with its Bambi Bucket.

The helicopter used the bucket — a red sleeve capable of holding 660 gallons — to scoop water out of Badin Lake then dump it minutes later along an old rail right of way.

It was a rinse-and-repeat process.

The tracks were the designated boundary line for the controlled burn to come, and dousing that right of way with water was the correct first step.

N.C. Forest Service helicopters would soon follow to shoot spheres, often referred to as ping-pong balls, into the area the fire managers wanted to burn. The helicopters carried aerial ignition devices to launch the balls while also injecting a liquid chemical into the spheres.

A delayed reaction occurs between the injected chemical and a dry chemical already in the balls. Ignition happens when the balls land.

“Anytime we can do training, and a landowner allows us to do it,” district forester Don Watson of Rockingham said, “… it’s a win-win.”

And that’s what this week has been about for members of the N.C. Forest Service, N.C. National Guard and N.C. State Parks. The agencies combined to hold Air Operations Functional Training, based out of the Boy Scouts’ Camp Barnhardt.

They set up a helicopter base at the Boy Scout camp with three pads — two for the Forest Service and one for the National Guard.

A mobile command station also was on site. From there the Forest Service monitored flights, guided communications, recorded the exercises and basically observed the training.

Hannah Johnson, a county ranger from Forsyth, headed the command station Wednesday with the assistance of Larry Welch and Randolph “Radar” Harrison.

With Camp Barnhardt as the base, the pilots and crews practiced multiple missions, such as using 150-foot lines — “longlines” —to pick up and deliver supplies. They connected Bambi Buckets, practiced water pickups and drops, and used the aerial ignition devices.

Some prescribed fire activities have been planned throughout the week, according to Brian R. Haines, public information officer for the Forest Service. Weather permitting, the action could continue through Friday, when a controlled burn is planned at Morrow Mountain State Park, near the lookout.

Many of the people in the air and on the ground Wednesday in Stanly County were veterans of the vast 2016 forest fires in western North Carolina.

“Our folks in particular have been doing this for a while,” Haines said

But these training days are always a good opportunity to refresh and hone skills and share information among agencies.

Watson said it’s important for the people with the Forest Service and National Guard to be on the same page with terminology and concepts.

“We’ve really been working to bring us together in this arena,” he said.

Things such as dumping water from a helicopter or flying one to carry supplies at the end of a 150-foot line can be challenging.

For example, the Bambi Bucket the National Guard was using Wednesday held the equivalent of 5.5 tons of water. It takes communication on the ground and among the crew in the air to know where and when to dump that payload.

“You don’t want to be underneath it,” Watson said.

And flying with a longline from the bottom of a helicopter brings in all kinds of concerns about treetops, power lines, structures and people — and how to avoid them.

Wednesday, crews were attaching bays of hay and pallets to the end of the line, and the helicopters were sling-loading them to a burn area, where the materials would be ignited later.

Dave Shore, who works for the Hickory region, serves as crew chief on his helicopter, and he becomes important eyes for the pilot when it comes to picking up and dumping water. He gives the word to the pilot, for example, on when to release the water.

Shore has to hang out the open side door of the helicopter to help with his instructions.

“I love this,” said Shore, a military veteran. “Nobody’s shooting at me. … The more we do it, the better we get.”

Haines said the objective with Bambi Buckets is to slow fires and steer them in certain directions that ultimately help firefighting efforts on the ground.

“It’s as much an art as it is a science,” Haines said.

Prescribed burns such as the one conducted Wednesday near Badin Lake are good for hazard reduction by getting rid of underbrush and woody debris. They also aid wildlife.

For foresters such as Watson, the smoke from burns can present the biggest problems. The Forest Service will sometimes run computer models to determine where the smoke will go during a burn.

Watson said no one wants smoke in their living room or settling over a town or major highway. “Smoke in the road is no joke,” he added.

Participants in the Air Operations Functional Training had their lunches in the Camp Barnhardt dining hall.

The Forest Service’s Hannah Thompson-Welch served as helibase manager. She said an “after-action review” of everything that happened during the training would come as early as Friday.