Marlene Johnson guilty of 2013 murder, sentenced to life without parole 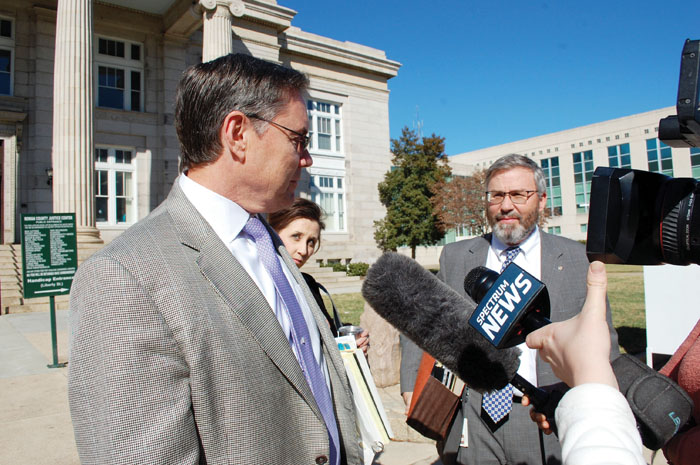 Attorney James Davis, left, paralegal Candace Brown, and attorney Jay White defer comments after the close of the Marlene Johnson murder trial since their client is appealing the court's decision. Johnson was sentenced to life in prison without parole for the 2013 murder of Shirley Goodnight Pierce. Shavonne Walker/Salisbury Post

Upon hearing the verdict, Johnson, 66, collapsed to the floor, leading the judge to order her to stand up and listen.

“Ma’am, you will die in prison. That is my order,” Albright emphatically told her.

In tears, Tracy Pierce Brown, the only daughter of Shirley Pierce, stood before the judge and said Johnson had taken something precious from her.

“She was everything to me,” Brown said.

She told the judge that Pierce never got to see her grandson graduate from high school and go to the prom, nor would she get to see him get married. Overcome with emotions, Pierce’s grandson, Devin Brown, dropped his head.

“You decided to take her away from us,” Tracy Brown said.

“As a Christian, I’m supposed to be forgiving. I can never forgive you for what you did, and if that keeps me from going to heaven to see her, then I will meet you in hell,” she said.

Shirley Pierce’s fiance, Chuck Reeves, was at a loss for words, but he said Johnson took “the most wonderful person in the world.”

He thanked the court for the decision that was made. Reeves found Pierce dead on July 23, 2013, inside her Kannapolis home after he had not heard from her for some time. A medical examiner told jurors that Pierce, 62, had been stabbed once in the neck, severing her jugular vein and carotid artery. Pierce died a painful death and would’ve likely lost consciousness within three to five minutes, testimony revealed.

She also had a number of other superficial cuts to her arms, hands and face that were believed to be the result of fighting off her attacker.

Rowan County investigators collected evidence including blood-spotted paper towels that were left at Pierce’s Evandale Road home. When tested, the towels were matched to Johnson’s DNA.

Detectives said Johnson mistakenly believed Pierce was having an affair with her estranged husband, Ervin Johnson. Ervin Johnson, now retired, was the chief financial officer and president of Tuscarora Yarns, based in Mount Pleasant. Pierce was the executive administrative assistant to Martin Foil, the company’s chief executive officer.

Testimony throughout the trial showed that Johnson harassed and stalked Pierce to the point that Pierce had to obtain multiple restraining orders against Johnson. When detectives searched Johnson’s home and vehicle, they discovered surveillance photos of Pierce at her own home and job.

Rowan County Sheriff’s Office investigators said Johnson had mail, bills and other items that had been taken from Pierce’s mailbox.

Court testimony also revealed that Johnson used bleach to clean up the crime scene, which forensic analysts said made it impossible to obtain conclusive DNA from some items.

Ann Barnhardt, Pierce’s sister, said she has been reminding herself of what the Bible says about not seeking revenge and instead letting God avenge them.

“God has taken care of this family, even in this battle,” Barnhardt said.

She said Johnson brutally killed her sister, who didn’t deserve it.

“I don’t know how a human being could’ve done such a horrible thing,” she said.

Barnhardt admitted she had not forgiven Johnson but said now that the trial has come to a close, she hopes to work on forgiveness. She wished Johnson well in prison, adding she certainly does not deserve to walk he streets.

“The sight of you makes me sick to my stomach,” Barnhardt said.

Pierce’s other sister, Jo, did not speak at the close of the trial.

After court, Pierce’s nephew, Matt Goodnight, said he was grateful for the outcome and that now his family can begin the healing process after a nearly five-year wait. Defendant Marlene Johnson looks over at her family on the first day of her trial. Jon C. Lakey/Salisbury Post

“Marlene ruined and changed so many lives and ultimately got what she deserved,” Goodnight said. “It doesn’t make anything any easier, but the fact she will spend the rest of her life in prison is a small victory for us. I hope my beautiful aunt’s soul can now rest peacefully.”

The judge asked Johnson if she had anything to say.

“I disagree with the jury’s decision. I’m innocent. I was never there. I would never hurt anybody. I would not have killed Shirley Pierce,” Johnson said.

“The DNA evidence squarely contradicts what you just said,” Judge Albright told her.

The defense attorneys did not present any evidence or call any witnesses in the trial. Johnson elected to not testify.

In closing arguments, the attorneys questioned whether they were given access to all the evidence and raised questions about whether Rowan detectives conducted a poor investigation.

“We can’t produce a perfect trial; we can only produce a fair trial,” Auten said.