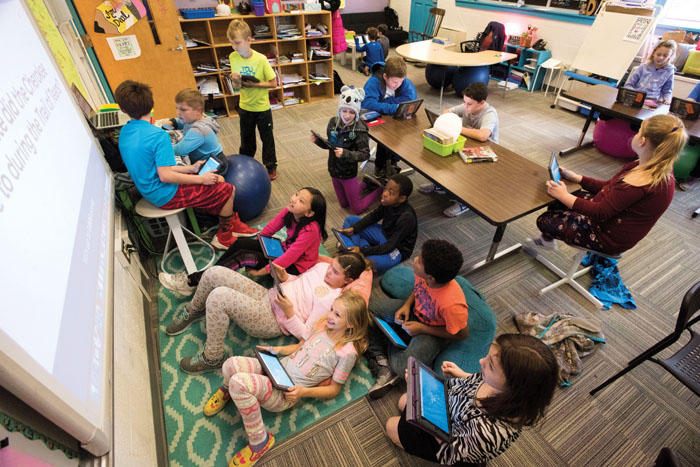 Rockwell Elementary students use their iPads to compete in answering questions on the class topic. JON C. LAKEY / SALISBURY POST

North Carolina doesn’t rank anywhere near 40th in either educational outcomes or resources, properly measured. The “Quality Counts” study by Education Week is not a quality count, in other words, and should not be taken seriously by policymakers in our state or anywhere else.

For starters, the study does not appear to adjust properly, if at all, for state-by-state variations in buying power. When schools vie for the services of teachers, vendors or construction companies, they are competing against other potential employers or buyers. To evaluate the real expenditure, then, requires either adjusting measures such as per-pupil spending and teacher salaries for living costs or comparing against, say, the average pay of non-education jobs that prospective teachers might take in their respective jurisdictions.

To put the matter more simply: personnel is the main expense for school districts. Living in Sanford is less expensive than living in San Francisco. If you don’t properly account for these kinds of disparities, any nationwide comparison of school spending is utterly useless.

The business group BEST NC just released its annual compilation of facts and figures on North Carolina education (at NCEdFacts.org) and it does a better job of presenting apples-to-apples comparisons.

On teacher compensation, for example, BEST NC uses the latest-available figures to show that the average pay of a North Carolina public school teacher in 2016-17 was $49,837. That ranked the state 35th by raw data and 27th after adjusting for cost of living. Among neighboring states, cost-adjusted salaries were lower in South Carolina (42nd) and Virginia (39th) but higher in Georgia (8th) and Tennessee (25th).

With regard to educational outcomes, there are also challenges in constructing valid apples-to-apples comparisons. While policymakers, parents and taxpayers certainly need to know the overall performance of our students, raw measures of test scores and graduation rates don’t necessarily speak to the educational value added by the schools themselves.

The background of students matters a great deal, according to a preponderance of empirical research on the subject. Kids who live with two educated parents in safe, middle-class neighborhoods tend to score much higher, and graduate at much higher rates, than kids living in other settings. Now, I’m not saying that demographics are destiny. The quality of schooling matters, too. But if you want a serious evaluation of school effectiveness, you must choose your metrics carefully.

I favor continued increases in teacher pay — provided they are structured effectively to attract and retain high performers — and certainly don’t think we should settle for average performance in any grade. But to rank North Carolina’s education system near the bottom of the heap is absurdly at odds with reality. It provides neither policymakers nor the public with useful information, and mainly serves the rhetorical needs of political partisans and special-interest groups.

There is plenty of room for healthy disagreement about education without resorting to trafficking in such nonsense.

John Hood (@JohnHoodNC) is chairman of the John Locke Foundation and appears on “NC SPIN,” broadcast statewide at 7:30 p.m. Friday and 12:30 p.m. Sunday on UNC-TV.