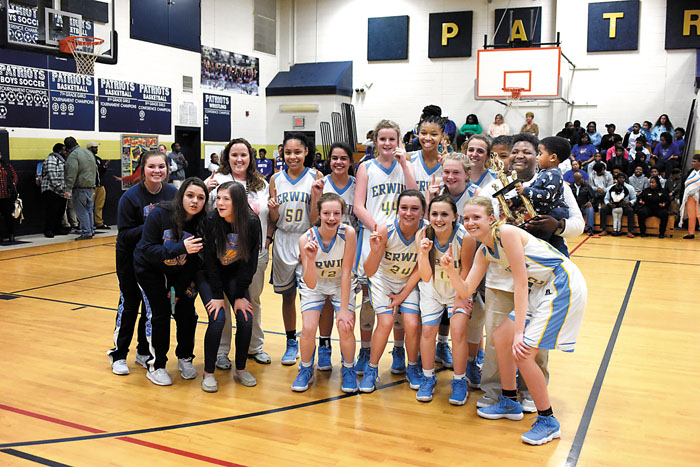 “She was our biggest supporter for basketball,” sixth-year coach Kim Caldwell said at Southeast Middle School, where Erwin pried opened its treasure chest of a season and dropped in another jewel — a 49-20 championship-game victory over Knox. “She was at every single game, every one of them. She even drove the bus for us, even though I have my bus license. She insisted on driving. And when she got there, she was our loudest fan. That’s just how she was.”

Against that backdrop, Erwin (16-1) rolled to its 11th straight win and captured its fourth consecutive title.

“It’s almost like she was our coach,” guard Hanna Isley said. “We dedicated every game to her. We could feel her here with us today.”

Forney must have been a steadfast defender because Knox (13-4) was limited to five field goals and went 10-for-20 from the free throw line.

“Erwin’s an overall solid team that played a good game,” said losing coach Justin Pauley, a former West Rowan and South Rowan varsity player. “Their press was tough to beat and the big girl was even tougher to stop.”

The big girl was Erwin seventh-grader Haley Dalton, a six-foot post player who capitalized on her size.

“Our biggest challenge was ourselves, because we really wanted this,” Dalton said, after contributing 18 points, seven rebounds and four steals. “We were motivated to keep going and never gave up. No matter how many fouls we were giving or what the other girls were doing, we just kept pushing.”

They had — at least in the early going. Knox used a pair of Jamecia Huntley layups to soar ahead, 4-0, in the game’s opening minute. Erwin responded with a 12-0 run, capped when Dalton made a mid-court steal and sprinted in for a layup with 30 seconds remaining in the quarter.

“Well, we played as a team,” said Isley, who finished with nine points and four steals. “Falling behind early only motivated us to get those points back.”

Once they did, they kept going. The Eagles built a 26-14 halftime lead that ballooned to 40-19 when Riley Isley turned a steal into a fastbreak layup and a 40-19 lead. It was all part of a 17-0 scoring spree that bridged the second and third quarters.

“Haley was the key,” Caldwell said. “She brings our inside game. We know if she gets position and holds her hands up, all we have to do is aim for her fingers. She’ll get it every time and make something happen.”

“At one point, we were getting rebounds and making our free throws,” Huntley said, after netting a team-high 12 points. “But they kept lobbing it in to (Dalton). Her arms and limbs are so long, she doesn’t even have to jump for the ball. I wish we could go back to the second quarter and start over. I’d like to fix all the mistakes I made.”

Erwin’s Mary Spry topped all rebounders with nine, but perhaps this championship was secured back on Nov. 30 — the day the Eagles’ 56-game winning streak was snapped by China Grove in a grueling, 45-42 setback.

“The thing about our girls is we don’t lose our cool,” Caldwell said. “We stay on point. We knew we still had to play. And we had Coach Forney with us.”