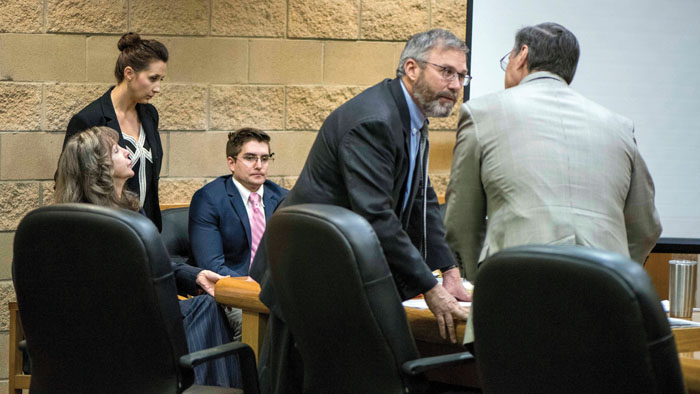 SALISBURY — Rowan County District Attorney Brandy Cook summed up what she and her team have been building up to in two weeks of testimony and evidence: Marlene Johnson is responsible for the death of Shirley Pierce.

Johnson, 66, is charged with brutally stabbing the 62-year-old Pierce in the neck in what has been described as a violent, painful death. Forensic pathologist Dr. Clay Nichols told jurors that Pierce would have been in pain for about three to five minutes before finally losing consciousness.

Pierce’s daughter, Tracy Pierce Brown, seated between her husband and son, looked away when Cook showed the X-ray of the knife blade sticking out of Pierce’s neck. The injury was so violent, forensic officials said, that the knife blade broke off. The handle was never found.

Cook said in both her opening and closing statements that Johnson believed Pierce was having an affair with her estranged husband, Ervin Johnson. Rowan County sheriff’s investigators have said the only connection between Pierce and Ervin Johnson were that they worked at the same company, Mount Pleasant-based Tuscarora Yarns.

Cook told the jurors that they may hear from Johnson’s attorneys, James Davis of Salisbury and Jay White of Concord, in their closing statements that investigators didn’t collect latent fingerprints or swab Pierce’s body. She said that because that evidence wasn’t collected does not mean the investigation wasn’t thorough.

Johnson tried to wash off evidence, and that’s why Pierce’s body was wet, Cook said.

Cook told jurors that Johnson staged the scene to look like a sexual assault and robbery had occurred, but she didn’t take anything from the scene. Pierce’s cellphone, wallet and jewelry were strewn about the house. It was all done by Johnson to cover her tracks, Cook said.

But all the tracks weren’t covered, Cook argued, including the fact that Johnson’s cellphone indicated she was close to Pierce’s home the night before Pierce was found dead and Johnson asked her boyfriend, Tim Connor, to provide an alibi for her.

Connor, a professional speaker and author, testified that he and Johnson met on Facebook and had been dating for about a year and a half. He said he loved her and when she asked him to lie for her, he did it. He soon confessed to investigators that he lied only because she asked him to tell them she was at his home.

Cook recounted how Pierce’s fiance, Chuck Reeves, found her body on the morning of July 23, 2013, at her Evandale Road home in Kannapolis.

She reminded jurors that first responders who went into the home after Reeves called 911 said the home was in disarray. In his testimony, Reeves said Pierce always kept her home immaculate and that someone had ransacked it.

While Cook was barely done with her closing statements, Johnson stood and said, “Your Honor,” as her attorney Jay White began tugging on her sleeve to get her to sit down.

Judge Stuart Albright immediately ordered jurors out of the courtroom as Johnson said, “May I speak?” Albright shouted an emphatic “No.”

Albright rebuked Johnson for what he called inappropriate behavior.

“I can only conclude that the truth hurts. The state was making an outstanding closing argument,” Albright said.

The defense attorneys did not present any evidence or call any witnesses in the trial. Johnson elected to not testify.

Albright told the defense attorneys to speak with Johnson before jurors returned. Davis apologized on behalf of his client. Johnson, who apparently changed her mind about speaking, said she did not have anything she wanted to say.

Cook said the attack was not committed by an unknown attacker but by a woman who had stalked and physically attacked Pierce to the point that courts had granted Pierce multiple restraining orders, the last of which expired a few weeks before her death.

“The last person that Shirley Pierce ever saw was the person who hated her the most,” Cook said.

White said it is up to jurors to ascertain the truth and then detailed evidence provided by the District Attorney’s Office that he said didn’t make Johnson a suspect.

He said the prosecutors’ evidence wasn’t entirely convincing and if jurors have any doubt, they should find Johnson not guilty.

White said it is up to jurors to decide if Johnson will spend the rest of her life in prison or get to go home with her family. Many of her family members have been in the courtroom throughout the trial.

White said in this day and age, the ability to gather all sorts of evidence exists. White questioned why investigators didn’t collect and have certain items tested. One item not collected or tested was a lone dark hair wrapped around Pierce’s fingers, he said.

Investigators said they believe the hair came from Pierce, so instead of collecting it, they sealed her hands in a plastic bag so that the medical examiner could test it. The hair was never tested and not noted by the forensic analysis.

Analysts also performed a sexual assault test on Pierce’s body. She was found wearing only a night shirt and no undergarments. The analysts noted the presence of sperm but did not test it, they said, because the attacker was believed to be a woman. Investigators also said Pierce was in a committed relationship with her fiancé, Chuck Reeves.

White asked jurors why, with all of the blood in Pierce’s bedroom, there were no bloody footprints found at the crime scene. He pointed to a number of small rugs at Pierce’s home, including in her kitchen and laundry room, that did not yield any footprints.

“Did they not look for footprints?” White asked.

He questioned jurors whether they were given all the evidence and raised questions about whether Rowan detectives conducted a poor investigation.

White said detectives should’ve swabbed Pierce’s neck and other parts of her body where injuries were noted. He said detectives didn’t swab his client’s scratches on her hands, her rings or a watch, but they seized the jewelry and watch.

The attorney noted that the kitchen faucet, soap dispenser and paper towel holder all would’ve been easy enough to swab or search for fingerprints since it was obvious the killer used and left paper towels at the scene.

Forensic analysts testified that Johnson’s DNA was found on the paper towels, which contained specks of blood. The paper towels were found between two clothes hampers in the laundry room and kitchen of Pierce’s home.

White said investigators rushed to judgment and didn’t want jurors to consider any suspect other than Johnson.

Davis also told jurors that the investigation was flawed and biased because of the history between Johnson and Pierce. He said Pierce was killed by an unknown assailant.

He said Johnson was excluded by many items of evidence, including DNA found in the blood collected from the hallway of Pierce’s home and from a garage door, both of which contained only Pierce’s DNA.

Davis asked the jury to do what is “right” and find Johnson not guilty.

Jurors deliberated for about 45 minutes Tuesday before the judge let them go for the evening. They will continue at 9:30 this morning.