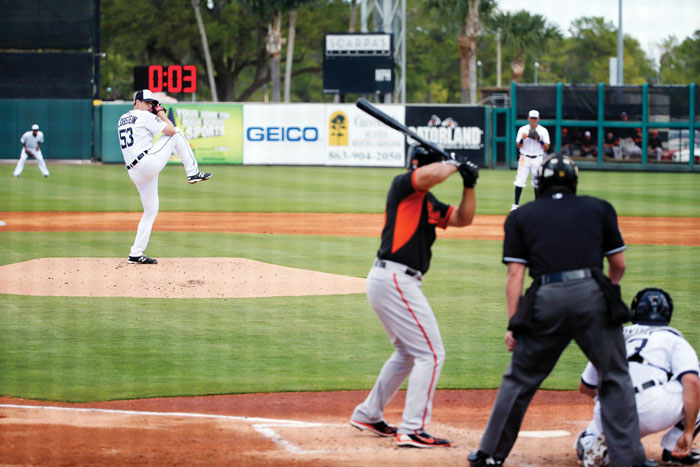 FILE - In this March 3, 2015, file photo, Detroit Tigers pitcher Kyle Lobstein, left, delivers his first pitch of the second inning to Baltimore Orioles' Matt Tulasosopo as the clock, background, counts down during a spring training exhibition baseball game in Lakeland, Fla. Major League Baseball has proposed the use of 20-second pitch clocks and limits on mound visits, a move that dares management to unilaterally impose the changes designed to speed pace of games. (AP Photo/Gene J. Puskar, File)

Management has the right to implement the rules changes it proposed last year. Under baseball’s labor contract, management can change on-field rules on its own with one season of advance notice.

MLB does not intend to make any decision before its next owners’ meetings, scheduled for next week in Beverly Hills, California. Big league spring training games start Feb. 23 and the season opens March 29.

“We discussed a wide range of topics,” Clark said in an email. “I will now be discussing each of those topics with our player leadership.”

Nine-inning games averaged a record 3 hours, 5 minutes during the 2017 regular season and 3:29 during the postseason, and the length of games has concerned club owners and executives in an age where they compete for consumers with more entertainment choices and shorter attention spans.

“It would be nicer to have the games move a little quicker. At the same time, you’re asking guys who’ve been playing at a high level their whole life to do something completely differently than they normally do,” Colorado center fielder Charlie Blackmon, the NL batting champion, explained last weekend. “I’m going to be resistant to change right out of the gate, no matter what it is.”

A hitter would be required to be in the batter’s box with at least 5 seconds left on the timer. The clock would start when the pitcher has the ball on the mound, except for the first pitch of an at-bat, when it would start at the end of the previous play.

The clock would reset when a pitcher steps off the rubber and when he makes or feints a pickoff throw.

An umpire would issue a warning to a pitcher or batter for a first violation each game, and subsequent violations by the same player would result in a ball being called against a pitcher and a strike against a batter.

Under the proposed limit on mound visits, a team would be allowed one per pitcher each inning, whether by a manager, coach or player. A second visit would result in the team being forced to change pitchers.

During bargaining, MLB offered to start the pitch clock this year only with no runners on base and delay its use with runners on until 2019.