Scouting for Food kicks off Saturday 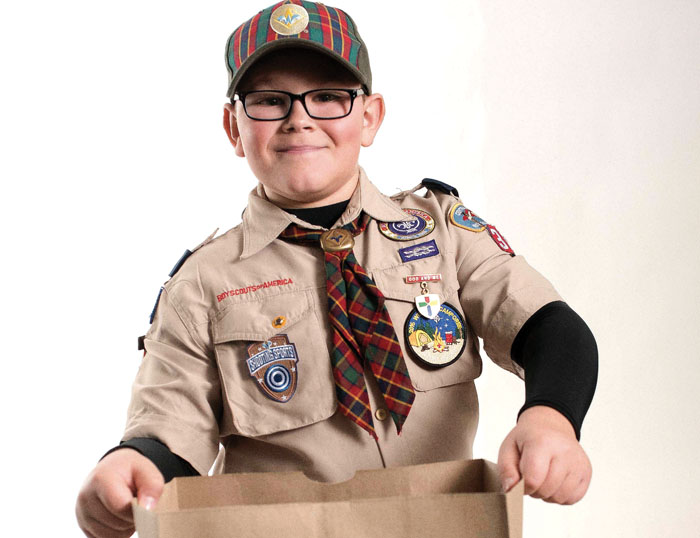 Noah Nisbet, a Webelos Scout with Cub Scout Pack 306 at North Hills Christian School, will take part in the Scouting for Food program to help feed those in need. Jon C. Lakey/Salisbury Post

SALISBURY — On Feb. 3, nearly 1,300 Cub Scouts and Boy Scouts will flood the streets of Rowan County to collect nonperishable food for those in need.

The annual Scouting for Food has been running for more than 30 years nationwide, said Ann Barber, Sapona district chairwoman for the program. But in Rowan County, it’s a bit of a newer practice.

Barber and her family have been participating for about five years, though she said it was in Rowan before that.

Scouting for Food begins Saturday, when Scouts will head out to neighborhoods and go door to door, handing out paper grocery bags. Residents will have one week to fill the bags with canned food or other nonperishables before the Scouts return Feb. 3 to pick up the bounty.

“Anything that we can do to help feed, we’re trying to provide a hands-and-feet service there,” Barber said.

In the five years that Barber has headed the operation, Scouts have gone from handing out roughly 2,500 bags in the first year to more than 6,500. Last year, troops collected an estimated 15,000 pounds of food.

“We want to double that this year,” Barber said.

The program is becoming a neighborhood tradition.

“We have people who come out and wait on us, and if we don’t show up they call us,” Barber said.

“We try to go to subdivisions because it’s hard to take a child out in rural areas,” Barber said.

While Barber said the groups try to concentrate on walkable neighborhoods, they will drive out to far-flung houses if requested.

Noah Nisbet, 10, has been participating in Scouting for Food since he was about 6 years old.

Each February, Noah dons his Cub Scout uniform and he and his troop go two-by-two to each house. They explain the collection to residents and leave them a bag. A week later, he and others return to help carry the food to trucks, then help unpack and shelve each item at the food pantries.

This year, things are a bit different.

“Food Lion has put us under their umbrella of Food Lion Feeds,” Barber said.

On Feb. 3, the grocery store giant will donate a truckload of food to the cause. Some collections — such as at schools and churches — will take place on Feb. 2 or Feb. 4 as well. With Food Lion’s help, Barber said she and the troops are looking forward to a good year.

“This is a positive thing we’re doing. We’re now having an impact on someone’s life. I would hate to think that there’s someone in Rowan County that’s hungry and we didn’t touch,” she said.

Residents interested in having a troop visit their neighborhood or who would like more information should contact Barber at annbarber739@gmail.com. Monetary donations will also be accepted. Checks should be made out to Rowan Helping Ministries and will be delivered to the organization immediately.