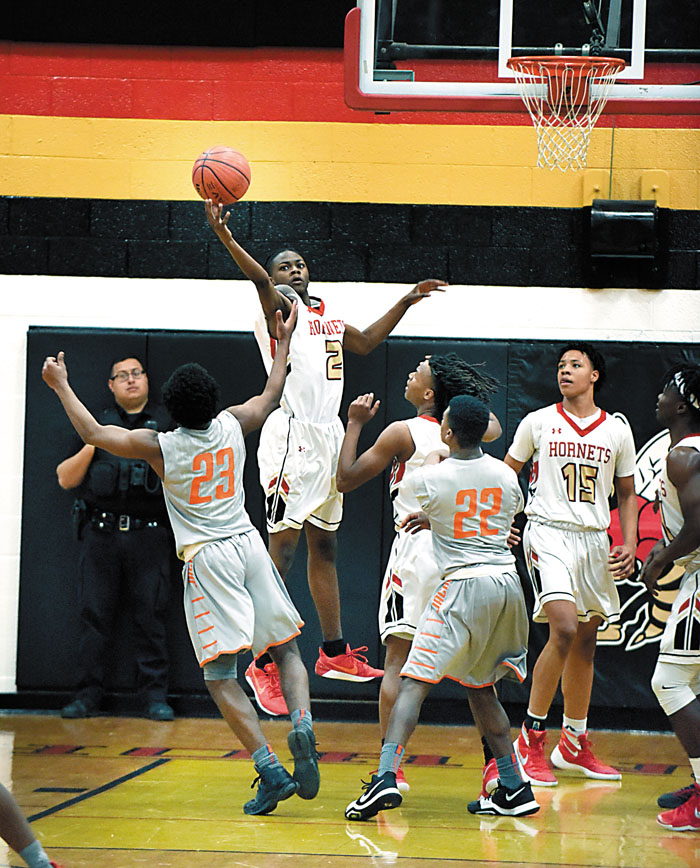 The Hornets quickly turned their first match in 11 days into a mismatch, shooting 51 percent from the field and playing shutdown defense in a 73-54 CCC victory.

“I was concerned at first,” coach Bryan Withers said after league-leading Salisbury (14-2, 11-1) won its second straight game and fourth in its last five. “Then we came out and played. This group is different, man. This group plays with a lot of heart, a lot of grit and a lot of fight. They hold each other accountable and that only makes them better.”

Salisbury used every weapon at its disposal against Lexington (9-7, 8-4), jumping to a 21-4 lead by the time 6-foot-5 junior Bill Fisher corralled an offensive rebound and hit a put-back early in the second quarter.

“We were ready,” teammate Elijah Moss said after draining four 3-pointers and finishing with a team-best 15 points. “We played real hard right away. I was surprised we came out like that, after such a long break. But like I said, everybody was ready.”

Fisher, who pulled down 14 rebounds, offered a different view.

“It had been a while since we played,” he said. “We had intensity and we wanted it, but I think we had a little trouble getting back into the groove. I don’t think we had the same juice we had against West Davidson (in an 80-39 triumph on Jan. 12).”

It’s not easy to get Withers’ undivided attention, but Fisher did after grabbing four offensive rebounds in the first half.

“Bill is a key because everyone has to play him,” Withers said. “That means the guards get better looks and better driving lanes. Sometimes he’s just not making plays, but when he does, he can get 15 or 20 (points) a night. When he’s making those plays, it’s hard to guard us, period.”

Lexington managed only two baskets in the first quarter and 10 in the first half, a tribute to the Hornets’ swarming, in-your-face defense. The guests finished 23-for-67 from the field (34.3 percent), including just 2-for-18 on three-point attempts.

“In the beginning of the game, we defended like crazy,” said Withers, who singled out the disruptive defensive play of senior Trell Baker. “Baker’s defense was unbelievable.”

His offense wasn’t bad, either. Baker shot 4-for-8 from the field, netted 12 points and added three assists.

“He could come out and want 25 a night,” Withers. “And he could put it up and get 25 a night. But Baker’s trying to make plays for Bill and everybody else. He is playing so unselfish this year.”

Moss scored 11 points in the third quarter, when Salisbury extended a 10-point halftime lead. His 20-foot splashdown from deep in the right corner put the Hornets up 52-35 with 31 seconds remaining in the period.

“My shot started falling,” he said after shooting 5-for-6 from the floor. “If we play like that — and shoot like that — there won’t be many teams that can beat us.”

Salisbury led by as many as 26 points following Baker’s 3-pointer with 1:57 remaining. The Hornets finished 6-for-9 from long range. Lexington closed on an 8-1 run against the Hornets’ reserves, but that hardly blunted their optimism.

“It’s all about getting the win,” Fisher said. “It’s not about Bill. It’s about Salisbury.”

NOTES: On the negative side, Salisbury made only 11 of 25 free throws and had 27 turnovers. … Salisbury, which beat Lexington, 77-65, on Dec. 1, is now 6-0 at home. The Yellow Jackets slipped to 5-2 on the road and had their two-game winning streak stopped. … The Hornets play the second of their four games this week Thursday night at Central Davidson.