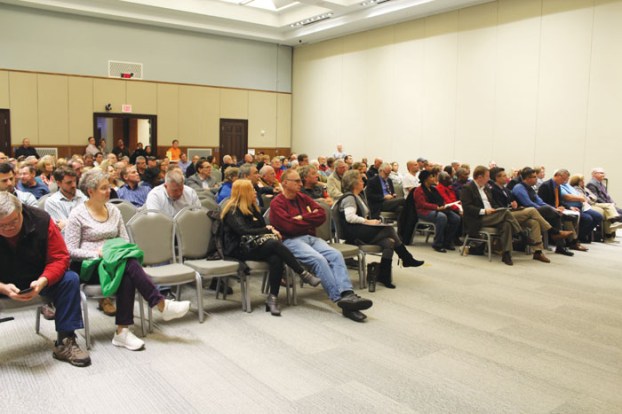 KANNAPOLIS — With three public hearings on the agenda, the Kannapolis City Council met Monday evening in a crowded room.

First on the docket was a public hearing on the rezoning of 7.43 acres at 2800 Trinity Church Road and another parcel across Stonewood View.

Providence Properties’ original request, made to the Planning and Zoning Commission on Dec. 6, was denied because it included plans to develop an 8,400-square-foot day care center. That has since been removed from the plans.

Residents in the area expressed concern about light pollution and stormwater runoff.

Barry Shoemaker, chairman of the Cabarrus County Board of Education, said he wants to make sure that the city is considering schools as it pursues the development.

Resident Violet Mitchell said she feels the proposed developments are not affordable for average Kannapolis residents.

“I have been saying all along that Kannapolis does not have that kind of wealth,” she said, citing the $250,000 to $300,000 price tag on the homes. “Kannapolis seems to have become the haves and the have-nots. … These people are talking about it like it’s nothing. It’s nothing to them because they’re in real estate.”

Despite the concerns, the City Council approved the rezoning request after hearing support from the Trinity Crest subdivision board.

Next came a public hearing to rezone parcels at 5032 Trinity Church Road and 6045 and 6205 Stirewalt Road.

The developer, M/I Homes, requested a rezoning from agricultural district to residential village with plans to build a 121-unit subdivision of single-family, detached homes. There would be on a mix of 60- to 75-foot-wide lots ranging in area from 7,500 square feet to 9,375. The subdivision would include a 0.93-acre park.

Multiple residents and City Council members voiced concern about the proposed density of the area: roughly 2.5 homes per acre.

“Kannapolis lacks a lot of neighborhoods that actually have a neighborhood feel,” said Councilman Ryan Dayvault. He said the 2015 land use plan is misleading developers with its stated maximum of eight homes per acre.

Dayvault said the solution may be to fix the plan, preventing developers from wasting their time on pursuits that will meet with further resistance.

Nearly a dozen Kannapolis residents spoke in opposition to the development, saying it would not be consistent with adjacent neighborhoods. Concerns included traffic, driveways and increased crime.

Property owners Fred Roberts, Jack McKinley and Cliff Credle each said he felt the project fits within the evolving vision for Kannapolis.

To illustrate changing times, Roberts spoke of enrolling his son in Odell Elementary School years ago. At the time, he was required to sign a permission slip that allowed the school to corporally punish his son. That would be unheard of now, he said.

“Times in Kannapolis have changed,” said Roberts. ” … We have a legal right to sell the property to anyone.”

Jack McKinley said that those expressing concern are “living in a past that wasn’t, a present that isn’t, and a future that will not be.”

In the end, the council decided to table the rezoning decision, as Councilman Roger Haas was not in attendance because of illness.

Mayor Darrell Hinnant said tabling the request was because council members want to ensure they were making the right decision.

• The council approved a memorandum of understanding between the city and Corporate Realty Development that will allow the city manager and developer to begin work on a four-phase, $300 million investment downtown.

The development would bring apartments, retail shops, restaurants, corporate offices and more to the area where a new sports and entertainment complex is planned.

• The council approved changes to the unified development ordinance, amending the public notification requirements for legislative, quasijudicial and neighborhood meetings for preliminary plats.

Scouting for Food kicks off Saturday

SALISBURY — On Feb. 3, nearly 1,300 Cub Scouts and Boy Scouts will flood the streets of Rowan County to... read more