No. 25 Miami holds off NC State for ACC road win 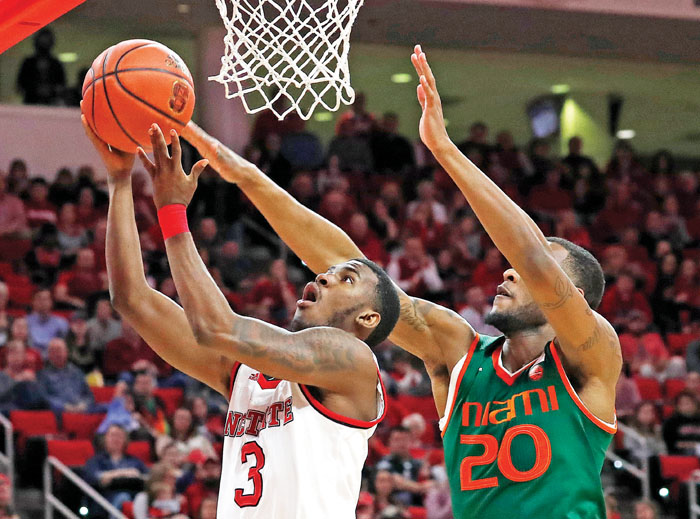 RALEIGH (AP) — Miami coach Jim Larranaga and his staff spent recent practices pushing his players to whip the ball around the perimeter, keep things moving and set up each other for good looks.

Bruce Brown Jr. scored 19 points and No. 25 Miami shot 58 percent to hold off North Carolina State 86-81 on Sunday, turning in its best offensive output since November.

Larranaga quickly pointed to one stat to explain why: his team’s 26 assists — five more than its previous high — on 34 baskets.

The Hurricanes (14-4, 3-3 Atlantic Coast Conference) came in averaging 67.8 points and shooting 42 percent in five league games, including just 30 percent from 3-point range to rank 14th in the 15-team conference. They blew past all those marks Sunday, from shooting 60 percent after halftime to making 10 of 19 3s for the game.

“We’re a great catch-and-shoot team,” Brown said. “And we have recently shot a lot of 3s off the dribble or late in the shot clock. But today it was just easy for us: drive, kick, open 3s, one more pass. It was just all in rhythm.”

The Hurricanes led the entire second half, but struggled to put away the Wolfpack (13-7, 3-4). They stayed in control by committing just 10 turnovers for the game, avoiding the miscues that can fuel the Wolfpack’s pressure defense and lead to transition scores.

Omer Yurtseven had 28 points for N.C. State, which had a humming-along offense of its own. The Wolfpack shot 63 percent after halftime and 54 percent for the game to stay within arm’s reach the entire way, getting as close as one midway through the second half but failing to push ahead.

“I thought we did a good job offensively,” first-year Wolfpack coach Kevin Keatts said. “I thought our guys played loose. But we didn’t get the stops we needed to.”

Miami: So has Miami found something sustainable in this offensive showing? The Hurricanes kept coming up with big baskets to answer every run by the Wolfpack and now have made 19 3s in the past two games.

“I’m more comfortable with this than what I’ve been seeing,” Larranaga said of the tempo. “The talent that we have is more suited for an open-court game than it is a prize fight, a football game in the paint.”

N.C. State: The full-court, attacking style brought by Keatts had already led to wins against a pair of No. 2-ranked teams — Arizona in November, Duke earlier this month — as well as a win against then-No. 19 Clemson.  But N.C. State’s defense wasn’t up to the challenge of slowing Miami’s refocused offense, including allowing several wide-open lanes to the rim.

“Just give them all the props for that,” said Torin Dorn, who had 13 points. “But we’ve got to be better.”

Larranaga said Walker’s back tightened up so badly Friday night that he couldn’t bend enough to touch his knees, keeping him out of Saturday’s practice and putting his status in question until tipoff. Walker finished with 12 points in 30 minutes.

Miami’s Anthony Lawrence II and Ebuka Izundu each scored 15 points, with Izundu going 7 for 7 off the bench after managing just 12 points and six made baskets in his previous six games combined.

Guy, No. 2 Virginia pull away to beat Wake