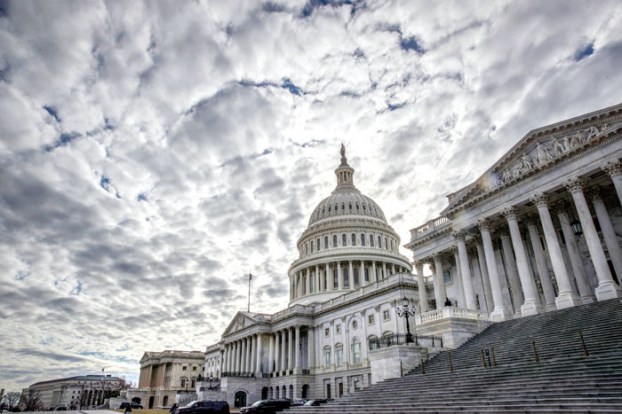 The Capitol is seen under cloudy skies on Day 2 of the federal shutdown, in Washington, Sunday, Jan. 21, 2018. (AP Photo/J. Scott Applewhite)

The shutdown came after Congress failed to reach an agreement before midnight on Friday.

By noon Saturday, feathers were ruffled in Salisbury and with local representatives, and many began to point fingers across the aisles.

“It is unacceptable that our government shutdown because Congressman Ted Budd and his allies in Washington are not ready or able to govern responsibly,” Kathy Manning, a Democratic congressional hopeful running against Budd said in an e-mail.

While Manning fences with Budd, Senator Thom Tillis, a Republican, placed the blame on the Democrats.

“Tonight, I voted with nearly every single Senate Republican to keep our government open and fund our servicemembers, veterans, seniors, and children who depend on CHIP,” Tillis said in an e-mailed statement. “Unfortunately, nearly every single Senate Democrat, led by Senators Schumer and Durbin, have been determined to shut down the government, and they got what they wanted. Their cynical, partisan political ploy will have real-world consequences for hardworking families in North Carolina and across our nation.”

According to the Associated Press, on Friday night Senate Democrats killed a GOP-written House-passed measure that would have kept agencies functioning for four weeks. The party instead hoped for a bill that would allow just a few days —which they did not receive.

The AP reports that Democrats have insisted they would back legislation reopening government once there’s a bipartisan agreement to preserve protections against deporting about 700,000 DACA recipients.

In Salisbury, Rowan County residents were just as unhappy as legislators — even if they wouldn’t be directly affected by the shutdown.

Seaford said he won’t personally be affected, but as a Republican he wished the argument hadn’t gone this far.

“They want to worry about immigration, but personally I think they should worry about paying the bills,” he said of Congress.

Some said they hadn’t been aware that a shutdown was possible until they woke up Saturday.

“I think it’s disgusting, I really do,” Linda Sufficool said. “I’m disappointed that Republicans and Democrats and whoever else can’t work together for the good of the country.”

At Hap’s Grill, Larry Williams took advantage of the warm weather to eat outside. He said he hadn’t been aware there was a shutdown, but wasn’t too concerned about it.

“I could care less because they don’t do anything when they’re open,” he said.

Mark and Angela Roberts were waiting in line for lunch, and the couple said they’ve been following the discussion, even if they wouldn’t be directly affected.

According to the Associated Press, Social Security and most other safety-net programs will be unaffected by the shutdown, and critical government functions will continue. If the shutdown stretches until Monday, most federal employees will be placed on furlough.

Angela said it didn’t sit well with her that the inability of a few to come to a decision would have a negative impact on millions of people who depend on government work to make a living.

But she hoped that something could be done.

“We want to see bipartisan agreement working towards long term solutions — because we believe it’s possible,” she said.

Down the road, Sufficool echoed the sentiment, and called for open dialogue.

“I think that part of the problem in the world today is people are not communicating,” she said. “…I just hope we can come to a consensus soon for the good of the country.”

By Susan Shinn Turner For the Salisbury Post KANNAPOLIS — After 75 years in business in downtown Kannapolis — 33 of... read more