Guy, No. 2 Virginia pull away to beat Wake 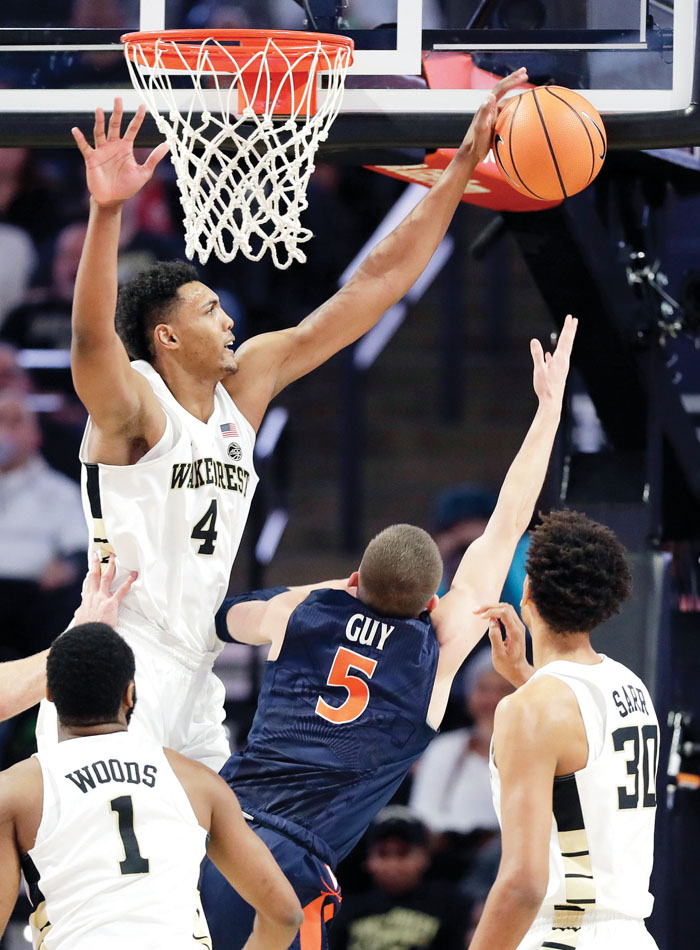 WINSTON-SALEM (AP) — Points are always at a premium in No. 2 Virginia’s low-scoring games. So when the Cavaliers finally found their way to the free-throw line after halftime, they cashed in on those freebies — and sidestepped Wake Forest’s upset bid.

The Cavaliers didn’t attempt a free throw in the first half — one reason why they trailed at the break for the second time this season — but went 10 of 10 from the stripe after halftime, with six coming in the final 1:17.

“In the second half, we got loose a little bit in that zone and got some clean looks,” coach Tony Bennett said. “I think, to be in that spot (in a tight game) … this is good. … Can we dig a little deeper? And I thought our guys did a solid job.”

Virginia shot nearly 46 percent in the second half, and the nation’s most efficient defense held Wake Forest to 30 percent shooting after halftime.

“They kind of stuck it to us in the first half, and we were playing kind of sloppy,” Guy said. “We were playing hard, but we just wanted to take it up another notch.”

Bryant Crawford scored 11 points, and Mitchell Wilbekin and Brandon Childress added 10 apiece for the Demon Deacons (8-11, 1-6), who kept it close against a highly-ranked Virginia team for the second time in three years but were held 11 points below their previous scoring low for the season and lost their fifth straight.

“Historically, Tony’s teams have been teams that score in this scoring range,” coach Danny Manning said. “And I thought that they missed some shots. We played pretty good defense in the first half. In the second half, they got to the free-throw line.”

Devon Hall added 12 points to help the Cavaliers win a tight one in which there were nine lead changes and five ties. Neither team led by more than seven until Hunter hit an important 3-pointer to extend Virginia’s lead to 53-45 with 3:44 remaining.

Virginia: The no-nonsense Cavaliers aren’t into style points — a good thing, because they didn’t earn many in a tighter-than-expected matchup with the league’s second-worst team. They trailed at halftime for just the second time, but locked down defensively in the final 20 minutes and created better shots against a Wake Forest team playing one of its better defensive games of the season.

Wake Forest: Manning’s team looked much better than it did three nights earlier at North Carolina State, or last weekend in a 16-point loss to then-No. 7 Duke, leading by three points in the second half. But only one player — 7-footer Doral Moore — hit a field goal in the final 8 minutes, a big reason why the Demon Deacons failed to finish off what would have been their second home upset of a top-10 team in two seasons.

Wake Forest pulled to 42-41 with about 8½ minutes remaining and had the ball twice with a chance to take the lead, but Crawford missed a 3-pointer on one possession and had his pocket picked on the next one. After a TV timeout, Virginia hit open 3s on consecutive possessions — by Hunter and Hall — to push the lead to 48-41. The Demon Deacons never got closer than five after that.

Smaller Virginia outrebounded a Wake Forest team that has two 7-footers in the rotation, finishing with a 32-29 advantage. Moore had 13 rebounds for the Demon Deacons, but none of his teammates had more than three.

“That’s Tony Bennett and U-Va. for you.” — Childress, on the Demon Deacons’ meager 49 points.

Virginia: Hosts No. 20 Clemson on Tuesday night before a visit to fifth-ranked Duke next weekend.