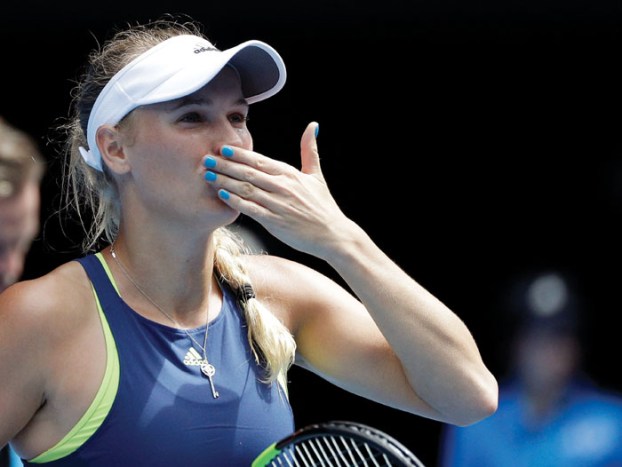 MELBOURNE, Australia (AP) — Caroline Wozniacki is continuing to cash in on her second chance at the Australian Open, reaching the quarterfinals here for the first time since 2012 with a 6-3, 6-0 win over Magdalena Rybarikova on Sunday.

After her close call in the second round — she had to save two match points and come back from 5-1 down in the third set — No. 2-ranked Wozniacki said she was “playing with the house money” and had nothing to lose.

After a tight tussle in the opening four games against No. 19-seeded Rybarikova, a Wimbledon semifinalist last year, Wozniacki dominated the fourth-round match and conceded only six points in the second set. She even tried a between-the-legs “tweener” from near the baseline for the first time in a tour-level match. She didn’t win the point, but said it was progress.

“I think you can tell my confidence is high,” Wozniacki, who finished last season by winning the WTA Finals title, said in an on-court TV interview. “I tried a tweener today and it went in.”

She looked at a replay on the stadium screen and joked “I’m admiring myself there.”

Wozniacki could return to the top ranking if she reaches the semifinals and a combination of other results go her way.

She has never won a Grand Slam singles title but lost the U.S. Open final twice — to Kim Clijsters in 2009 and to Serena Williams in 2014.

Suarez Navarro has reached the quarterfinals at a major five times, but is yet to make the semifinals.

She has won two of their seven career head-to-heads, which date back to a match on a lower-tier tour in 2006.

“Well, we play a lot of times,” Suarez Navarro said. “I know how she plays. I know how tough she is. She’s fighting every ball, but at the same time she can play aggressive. She has a lot of experience on these rounds.”