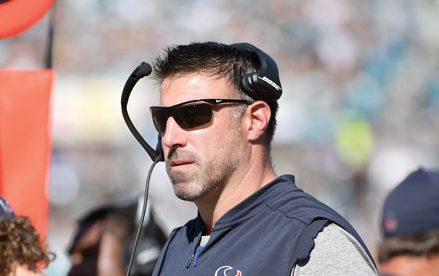 The Titans announced Saturday they have agreed to terms with Vrabel. A news conference was scheduled for Monday.

Vrabel was the first person Tennessee interviewed after firing Mularkey on Monday. Mularkey, who also coached Buffalo and Jacksonville, went 21-22 and led the franchise to its first playoff victory in 14 years . This will be Vrabel’s first head coaching job after 18 years in the NFL — 14 as a player and four as a coach.

Titans owner Amy Adams Strunk said in a statement it was easy to see Vrabel’s commanding presence and relationship with general manager Jon Robinson. The GM got his start in the NFL as a scout with the New England Patriots, where Vrabel won three Super Bowls as a linebacker.

“Mike has a commanding presence and a deep understanding for how he will attack this head coaching opportunity,” Strunk said.

“Throughout his football career, he has played for, been mentored by and coached with successful teams and organizations. He knows what it takes to reach that level of sustained success — he has seen it firsthand. We have a chance to build on the solid foundation that we established over the past couple of years and I believe Mike is the right person to continue that progress.”

The Titans became the seventh NFL team to change coaches since the start of the season, and now they are the third to hire their replacement, joining Oakland and Chicago. The Indianapolis Colts are closing in on Josh McDaniels but can’t hire him until the Patriots’ season ends. Arizona , Detroit and New York Giants have yet to hire new coaches.

In a statement, Vrabel thanked Strunk, Robinson and the Titans for putting their faith in him.

“We want to build a culture around winning, competitiveness and toughness,” Vrabel said. “Everything we do is going to be geared toward winning and being physical. We want to prepare our players so they know what to do, which will allow them to play fast and aggressive.”

The 42-year-old Vrabel is coming off his first season as defensive coordinator for the Texans. Vrabel’s 14-year career as a player included stints with Pittsburgh under coach Bill Cowher and New England under coach Bill Belichick, along with Kansas City. In 2011, he joined the staff at his alma mater, Ohio State, coaching linebackers and defensive linemen.

Vrabel went to Houston in 2014 and coached linebackers with the Texans for three seasons before becoming coordinator. The Texans won the AFC South in 2015 and 2016 thanks in part to strong defenses. The unit slipped this season amid injuries to players including J.J. Watt and Whitney Mercilus .

This was the first head coaching search since Robinson was hired in January 2016, two days before the Titans took the interim tag off Mularkey. Robinson said in a statement he always has had a great deal of respect for Vrabel as a player and as a coach.

“He was the ultimate team-first player, and he embodies that same mindset as a coach,” Robinson said. “He is intelligent, energetic, detailed and a leader whose deep passion for this game will resonate with our players. As a coach, I have seen him develop talent at both the college and NFL level, and put players in position for them to be successful.”