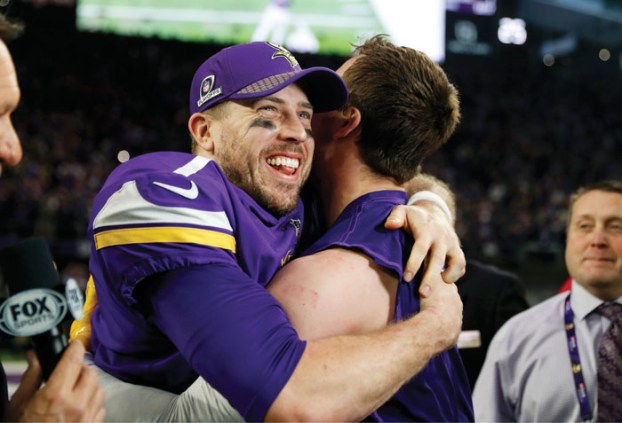 FILE - In this Jan. 14, 2018, file photo, Minnesota Vikings quarterback Case Keenum, left, celebrates after a 29-24 win over the New Orleans Saints during the second half of an NFL divisional football playoff game in Minneapolis. Keenum replaced an injured Sam Bradford, who had replaced an injured Teddy Bridgewater, all three of whom have expiring contracts after the Super Bowl. (AP Photo/Jeff Roberson, File)

The NFL’s final four all overcame injuries to star players

Following the NFL’s season of carnage that claimed the likes of, among others, Aaron Rodgers, Richard Sherman, Kam Chancellor, J.J. Watt, DeShaun Watson, Odell Beckham Jr. and Joe Thomas, this year’s final four all overcame not only the odds — “Minneapolis Miracle , anyone?” — but devastating injuries to key starters.

“We have a tough and resilient team,” Philadelphia Eagles defensive end Chris Long said of the NFC’s top seed , which is missing its second-year QB in Wentz, an MVP hopeful when he blew out a knee in December.

Yet, here they are, 60 minutes from Minneapolis and Super Bowl 52.

“I think that starts at the top with Doug, because he sets the tone for being resilient and even keeled,” Long said of his coach, Doug Pederson. “At the end of the day, we have a tough group of guys.”

So do the Minnesota Vikings, who are trying to reach their first Super Bowl in more than four decades and fulfill the mantra to “Bring it Home” and become the first NFL team to play the title game in its own stadium.

Together, the four quarterbacks left standing have a combined five Super Bowl rings, two NFL MVP awards and four Super Bowl MVP trophies. Brady, of course, owns all of that hardware himself.

Such is the panorama of these playoffs following a season of pain in which so many superstars were rendered sideline spectators with broken bones, snapped ligaments, torn muscles.

Behind resilient coach Mike Zimmer , who resisted the urge to quit just before he got the Vikings’ head coaching gig in 2014, Minnesota rolled right along. Keenum deftly took over for Bradford, and Jerick McKinnon and Latavius Murray became a productive backfield tandem.

“We’ve got a bunch of fighters on this team,” Zimmer said. “They’ve been a resilient bunch all year long. I expect it to continue to be that way.”

The Patriots are also a bunch of fighters; they reached their seventh straight AFC title game despite losing Edelman, Brady’s top target, to a torn ACL in the preseason, and Hightower to a torn chest muscle in November.

Play caller Josh McDaniels and Brady, who led New England to a fifth Super Bowl title last year despite the absence of Rob Gronkowski, adjusted accordingly to Edelman’s absence with another terrific year.

Linebacker Kyle Van Noy stepped in for Hightower and ranked third on the team with 73 tackles and second with 5½ sacks despite missing three of the final five games with a calf injury.

“The thing about K.V. is he’s very versatile,” said Patriots safety and defensive captain Devin McCourty. “So we’ve used him a bunch of different ways. … He’s been a big asset to our team.”

The Jaguars are the healthiest of the remaining playoff teams. They have only one opening-day starter on injured reserve: former Pro Bowl receiver Robinson, who tore his left ACL on Jacksonville’s opener.

Four months removed from reconstructive surgery, Robinson is now traveling with the team, so he’ll be on the sideline Sunday at New England, serving as a mentor to a raw receiving corps.

“Every person in this locker room put in a lot of work to get to this point, with me being one of them,” said Robinson, who was poised for another big year after dominating the league’s best secondary in training camp.

His injury on Jacksonville’s third offensive snap created a huge void for the offense. Marqise Lee and Allen Hurns tried to pick up the slack, but they ended up on the sideline at one point with injuries, too, leaving rookies Keelan Cole and Dede Westbrook to assume bigger roles.

Cole, an undrafted rookie from tiny Kentucky Wesleyan, had 42 catches for 748 yards and three scores in the regular season. He added a clutch 45-yard catch that set up a late TD in Jacksonville’s 45-42 stunner at Pittsburgh last week.

“I wish I could just wake up tomorrow and feel like I did Sept. 9,” Robinson said, “but I understand it’s going to be a process. I know I’ll be back to that point and better.”

Like so many other stars, Robinson will be in street clothes Sunday, cheering on his teammates in hopes of getting a sideline pass to the Super Bowl.

FOXBOROUGH, Mass. (AP) — The week started with a little trash talk from the underdog . The rest of it was dominated by speculation about a certain 40-year-old quarterback’s injured throwing hand .

Plenty of intrigue for when the Jaguars and Patriots meet in Sunday’s AFC championship game?

New England (14-3), the defending Super Bowl champion, is favored heading into its seventh straight conference title game. But the polished veneer it normally displays at this time of year is showing flecks of imperfection after Tom Brady injured his right hand during practice.

The injury kept Brady limited in workouts to begin the week and caused him to sit out practice entirely on Thursday.

Brady has never missed a playoff start during his 18-year career that includes four Super Bowl MPV honors. He said a bit contentiously only “We’ll see” on Friday when asked if he would play Sunday.

He wore red gloves and responded to other questions about the hand’s status by saying “I’m not talking about that.”

The Patriots’ top-ranked offense will need another signature performance from Brady against the Jaguars’ second-ranked defense .

Brady has faced a top-2 scoring defense in the playoffs three times, going 3-0 with a passer rating of 100-plus in each game.

Then he dismissed the notion that anyone in Jacksonville felt like the Jags were simply playing with “house money” after surprising Pittsburgh in the divisional round.

“We have earned the right to be here,” he said. “We have put a lot of time and effort in, so this is an opportunity we feel like we deserve and we have prepared for. I can honestly say I expected to be here.”

Jacksonville also will be up against history: The Patriots have won the past seven meetings with the Jaguars and two straight in the postseason. Since Jacksonville entered the NFL in 1995, it is 1-10 against the Patriots, including playoff games.

“We are going to go out and there do everything possible to stay alive and earn the right to be in the Super Bowl,” Campbell said. “They say you have to beat the best to be the best, so I can’t wait to get out there and try.”

Quarterback Blake Bortles, who has been the subject of criticism at times during his career , said Sunday isn’t about trying to prove anyone wrong.

Here are some things to watch for:

FOURNETTE’S HEALTH: Jaguars rookie RB Leonard Fournette said he is feeling “good” after he was rear-ended in what authorities say was a minor three-car crash early in the week.

Fournette ran for 109 yards and three touchdowns against the Steelers despite reinjuring his right ankle in the first half. It was his most productive game in three months.

“I feel good in spite of the ankle and stuff,” Fournette said. “Just taking care of my body, but overall I feel good.”

BULLETIN BOARD MATERIAL? All-Pro cornerback Jalen Ramsey caused a stir when he told thousands of fans awaiting the team’s return after their win over the Steelers that the Jaguars “are going to the Super Bowl and we are going to win that (expletive).”

“He should be confident, because he is very, very good,” Slater said. “The good Lord made that guy, and he said, ‘Let there be corner.’ And there he is. I’d be confident if I were him as well.”

CONTAINING GRONK: Coach Doug Marrone has seen plenty of Rob Gronkowski dating back to his stint as Buffalo’s head coach. His approach to trying to slow down a tight end he calls a “nightmare” of a matchup hasn’t changed much.

“Hope they do not throw him the football. Hope he drops it,” Marrone said. “There is no secret formula. I’d like to watch a game where someone has been able to do it. He is going to make his plays and you hope those plays don’t end up killing you.”

In his past six postseason games, Gronk has 512 yards receiving and seven touchdowns. He is looking for his seventh playoff game in a row with a TD catch.

SIZING THEM UP: Brandin Cooks is used to being underestimated because of his size. So the 5-foot-10 Patriots receiver isn’t worried about matching up against the taller players in Jacksonville’s secondary.

Both Jaguars starting cornerbacks, Ramsey and A.J. Bouye, are listed at 6-foot-1 and 6-0 respectively.

“I mean, you go and play,” Cooks said. “We’re not talking measurements at this point in the season, you know?”

Cooks said Bouye he’s gotten better since he faced him during joint practices this summer.

“At the end of the day, they’re physical. And that’s how they play,” Cooks said. “And they use that to their strength. So we gotta be ready to be able to match that physicality.”