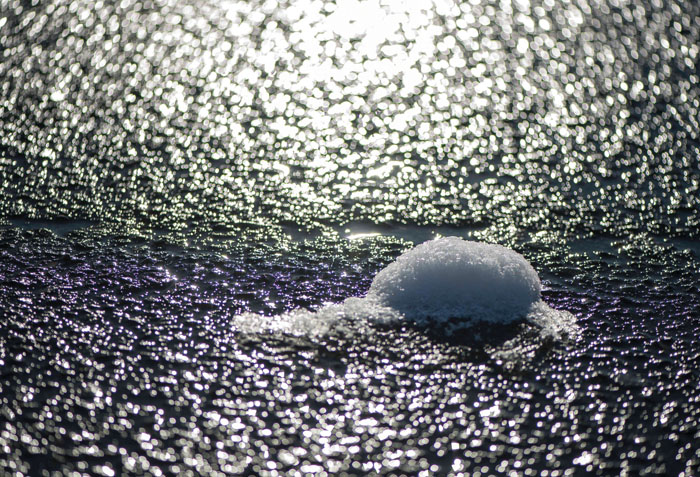 JON C. LAKEY / SALISBURY POST A single pile of snow shrinks in the sun in a parking lot in downtown Salisbury. Recent warm temperatures have been melting off remnants of the recent snowstorm.

SALISBURY — Two brightly colored saucer sleds lie forgotten at the base of Centennial Park’s hill, the only remnant of the crowds of children that filled the park during three days of snow.

As temperatures warmed up Friday and Saturday, winter weather loosened its grip on Rowan County, melting banks from plows, ranks of snowmen and turning sledding hills back into grass. The warmth pulled children and adults away from winter play, and Saturday saw groups strolling about downtown Salisbury to poke into stores or to grab a burger from Hap’s Grill.

According to the National Weather Service, parts of Rowan County received more than 7 inches Wednesday and Thursday. The fast-falling flakes and cold temperatures prompted local school closures for Wednesday, Thursday and Friday and resulted in a slew of canceled weekend activities.

Schools are expected to resume as normal Monday.

Across the state, the weather closed airports and canceled flights. In Rowan County alone, police, fire and rescue responded to more than 500 weather-related emergency calls on Wednesday and Thursday according to an article in Friday’s Post.

“But that’s probably only a drop in the bucket,” he said.

That doesn’t count calls for service, cars that slid off the road or were stuck in ditches. A trooper could stop to assist as many as 10 people on his or her way to a single call. And while troopers logged an additional 64 miscellaneous incidents, Hall said that number is likely not entirely accurate.

But while ice and slush still linger on shady backroads, higher temperatures mean that, at last, the storm has passed.

After temperatures failed to break out of the 20s Wednesday and plunged into the single digits Thursday night, they soared into the 50s Friday and Saturday, though a winter weather advisory remained in effect until noon Friday. Saturday’s high was 58, according to the National Weather Service, and temperatures today and Monday are expected to reach the 60s.

Salisbury’s winter wonderland is fast vanishing under the arrival of the sun.

While main roads are clear, be sure to take care driving on side streets and backroads, which may still be covered with snow and could be prone to freezing overnight.

But by Monday, it’s likely the only reminder of the past week’s winter fun will be the slowly shrinking snowmen, waving their thin arms at passing cars.