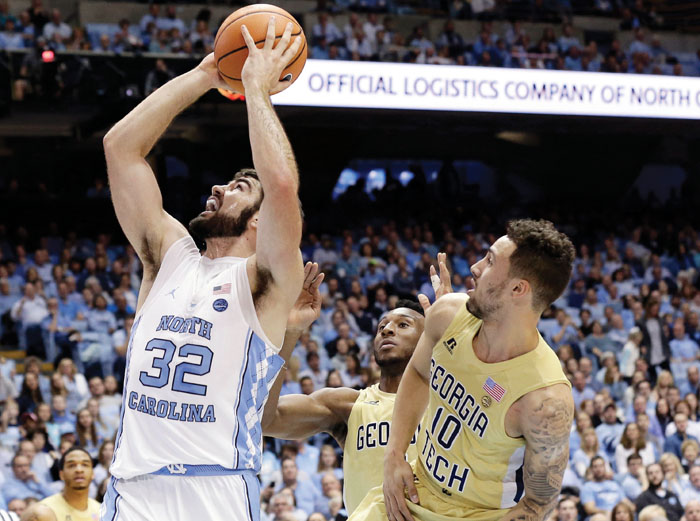 CHAPEL HILL (AP) — North Carolina kept hitting the glass hard — then pulled away after one of its most important players hit the floor hard.

Luke Maye had 17 points and 11 rebounds, and the 15th-ranked Tar Heels beat Georgia Tech 80-66 on Saturday.

They shot 42 percent and dominated the glass, building a 46-25 rebounding advantage and scoring 26 second-chance points to Georgia Tech’s four.

“We’re pushing our guys — as you’ve heard me say for 15 years how important I think rebounding the ball is,” coach Roy Williams said.

Jose Alvarado scored 17 points and hit four 3-pointers, including one that pulled the Yellow Jackets to 70-62 with about 3½ minutes left. But he fouled Berry on the Tar Heels’ ensuing possession, sending the point guard to the floor — and then stepped over him, earning a technical foul with 3:21 to play.

“I just felt like it was disrespectful to me,” Berry said. “I never want anybody to disrespect me like that. So I knew at the time he was going to do it. I just tried to get up fast, because I don’t like people stepping over me anyway. I just told him, ‘Watch where you’re stepping.’”

Berry hit three of the four free throws he was awarded to put North Carolina’s lead into double figures to stay. The Tar Heels were 19 of 24 from the line, while Georgia Tech was just 3 of 6.

“The whole key is, you’ve got to make free throws and don’t turn the ball over,” Tech coach Josh Pastner said. “Those are two areas where we haven’t been as good as I would like to be, and that’s put us in some positions of some of our losses.”

Georgia Tech: The Yellow Jackets had won four in a row before this two-game run against Top 15 opponents. After suffocating against No. 2 Virginia’s ACC-best defense, Georgia Tech couldn’t keep up with North Carolina’s fast-paced offense, which averages nearly 83 points — especially after one stretch in which it had two field goals in 10-plus minutes.

North Carolina: The Tar Heels’ winning streak remains intact, but Berry had a rough day until his free-throw bonanza all but iced it. The most outstanding player at the Final Four finished just 3 of 17 from the field and was just 1 of 8 from long range.

Pinson scored in double figures for the third straight game — the first time he’s done that in his career. . Johnson’s two highest-scoring games as a Tar Heel came this week. He scored 21 in the victory over Clemson.

“I know Coach. If I tried to do something, Coach would get on me and yell at me, regardless of the situation.” — Berry, on keeping his cool after Alvarado stepped over him.

Official Ted Valentine worked his first North Carolina game since he memorably turned his back on Berry as the guard protested the lack of a foul call during a loss at Florida State on Jan. 3. The first time Valentine blew his whistle was when Berry drew a charging call on Brandon Alston. Berry said Valentine apologized before the game.

North Carolina placed former forward Justin Jackson’s jersey No. 44 in the rafters during a halftime ceremony. He qualified for the honor by winning the ACC player of the year award last season, while helping the Tar Heels win their third NCAA Tournament title since 2005.