Man’s memoir a testament to his past 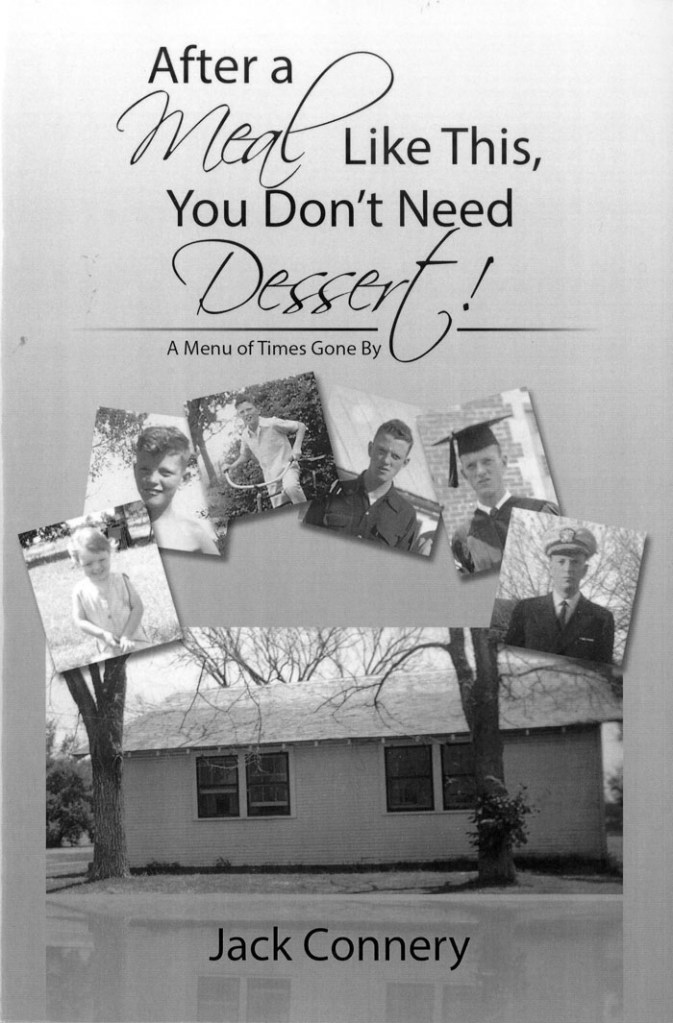 Following a great meal such as home-grown corn on the cob, baked beans and fried chicken from barn stock, it could very well be difficult to eat dessert, no matter how tempting. So it was as Jack Connery’s father pushed away from his table on Arrow Farm in Broken Arrow, Oklahoma, and made the daily statement, “After a meal like this, you don’t need dessert!”

It is in the smallness of such memory that history lives. Without our memories of daily life, we leave historians to fabricate, or worse — to connect with social media to shape the appearance of our lives. This broad approach, then or now, can miss the sweet salve of family love and honor or fail to portray the intricacies of living among 11 people in a two-bedroom home. Connery richly brings the love, honor and intricacies alive in his memoir “After a Meal Like This, You Don’t Need Desert.”

And while historians have carefully researched and can appropriately date the time of indoor plumbing in the average family home, research without the humanness of our stories cannot record what hilarity can ensue if the toilet is in a room with three doors and no locks with those 11 people. Connery did just that as his father put the bathroom in the center of the house and mismanaged three entries that only served for embarrassment and humiliating circumstances when guests arrived.

Connery captures a note of pre-war and post war life on a sprawling family farm on the edge of Broken Arrow, just outside Tulsa. Some of the tales he told and recorded while rearing his daughters became so precious to the girls that they constantly asked their father to write a book, and 30 years later it was born.

Among the stories, the daughters learn how their father met their mother for the first time as she confidently walked through a boarding house wearing only a slip, their father interviewing to live there as a boarder. Connery was allowed to board, but Mary Kathryn, a niece of the owner, was sent away when it was discovered the two were interested in each other. They continued the romance and later married.

Connery went to school, a minority Catholic in a heavily Protestant community, learned about girls from the back seat of a friend’s car and experienced a lifelong trauma at Boy Scout summer camp. He was busy with farm work, playing football and hanging out with friends at the pool hall, enjoying beer and planning a future as a writer.

Connery is honest in reporting his failures and mishaps, from a three-week school suspension for leading a junior-senior fight, to costing a local farmer who hired him as a night watchman a prized ram. The annual fight was arranged to allow boys to dissipate grudges, and the school did not sanction it until a new principal came to town. Not understanding that change is inevitable, Connery ran the fight anyway, despite a warning from the principal and school board, and suffered the consequences, though his fellows won the fight.

On a farm, the golden rule is to keep the garden weeded and watered and take care of the farm animals. Sadly, Connery broke the rule with farm animals more than once and earned his father’s disappointment and caused a neighbor’s loss of income. For two nights, Connery reported that all sheep were present. When his brother checked behind him, the neighbor’s precious breeder was missing due to Connery’s lack of dedication. The boys eventually found the ram in serious condition; it later died. Losing his father’s respect caused Connery much heartache as a child.

Honoring three important people who shaped his life, he tells of an English teacher who gave him a lifelong love for writing and poetry. He tells of the high school band instructor who opened doors for social and musical growth by traveling with band members about the county and inviting everyone to a harvesting party held each. He remembers the coach who became his principal and wore him out after Connery called him “Buck,” a name the principal earned after being shot in the derriere when he stole a watermelon. Connery earned the honor of calling him “Buck” as a young naval officer returned from war.

Connery’s background as a journalist and Naval officer shape his writing style, which is precise and highly detailed. He is sometimes dry and terse as when he speaks of his father’s discipline and distance, other times emotional and fluid as in his story of his late arrival home from school on the day his father, a WWI veteran, died of tuberculosis, a secondary disease from exposure to German gas in the war.

Bravely and remarkably, he includes the first and last names of many of those who shared his youth. Returning to Tulsa soon for a book signing, he will meet and talk with some of those in his stories who shared the bloody noses and Boy Scout camping trips with him. And though some are unable to visit due to health concerns, it remains to be seen if there will be bloody noses after some of the interesting moments Connery relates involving school and church chums.

Connery was a guest speaker at St. John’s Book Club. His book is available at Church Season’s Gift Shop on The St. John’s Lutheran Church Campus and online.