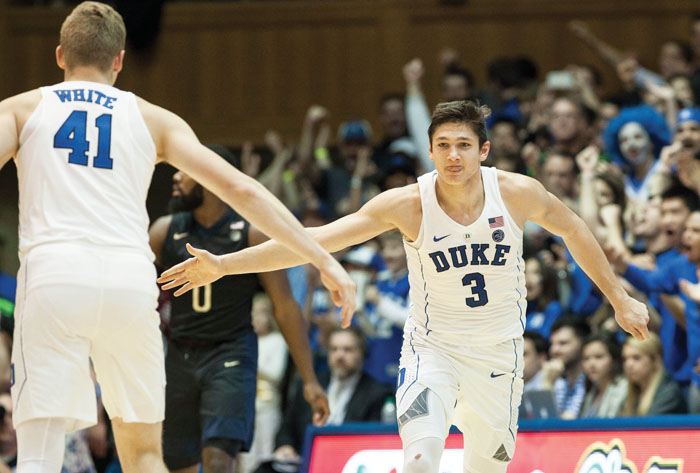 Duke's Grayson Allen (3) reaches for the hand of teammate Jack White (41) after hitting a three-point basket during the second half of an NCAA college basketball game against Pittsburgh in Durham, N.C., Saturday, Jan. 20, 2018. (AP Photo/Ben McKeown)

DURHAM (AP) — Grayson Allen stepped confidently into the 3-point shot near the Duke bench and let it fly — only to see the ball go halfway down and then roll out of the rim. The senior could only chuckle.

That much was clear during the fifth-ranked Blue Devils’ 81-54 win against Pittsburgh on Saturday. Allen scored 16 points in the rout, his best output since the start of the 2018 calendar year and a sign that maybe — just maybe — Allen is nearing the end of this monthlong rebellion by his suddenly wayward shot.

“I’ve had like nine of those in the last three games,” Allen said of the second-half 3 that rolled out, “that just hit the front of the rim, go halfway in and bounce out. When you’re about a half-inch off like that, there’s nothing you need to change or anything. You just keep shooting it.”

That certainly gave Allen — who as a freshman provided the desperately needed spark to help the Blue Devils beat Wisconsin in the 2015 NCAA title game — a low-pressure day to re-find his missing shooting rhythm. He made 5 of 11 shots and 4 of 10 from 3-point range in 26 minutes; he was shooting just 30 percent from the field and 20 percent from 3-point range in six ACC games coming in.

“The games before he went into this kind of shooting slump, he’d been shooting the ball great,” Carter said. “I believe it’s going to fall at some point. We just keep telling him to keep shooting and I’m sure it’s going to be there.”

Allen also showed his familiar emotional edge, most notably when he bounced up from taking an early hard fall on a flagrant breakaway foul and yelling a couple of frustrated expletives while being led away as the referees began to a replay review.

“That fire was already there,” Allen said, “but it added to it.”

Duke finished with 24 points off turnovers to go with 18 second-chance points after controlling the boards, leading by as many as 34 points midway through the second half. Parker Stewart scored 15 points for the Panthers, who shot 41 percent.

“They’re an elite team,” Pitt coach Kevin Stallings said, “so we knew it was a tall challenge when we got here.”

Pittsburgh: Pitt continues hurtling toward a bottom-of-the-ACC finish. The Panthers arrived with its worst start in ACC play — this is their fifth season — and now they have their first 0-7 start in a conference since losing to Louisville for an 0-7 Big East mark in January 2012.

Duke: This was a game for Duke to fine-tune things moreso than a question of whether the Blue Devils would win their fourth straight. Among the positives: Duke’s defense was frequently active and getting hands in passing lanes — particularly in the first half — and pestered the Panthers into three 10-second backcourt violations.

The best news for Pitt? The Panthers only committed four second-half turnovers with the outcome long determined.

“In the second half, I thought we did a much better job of taking care of the ball, and that allowed us to play better,” Stallings said, adding: “But we’ve still got a long way to go.”

Duke: The Blue Devils stay in their home state with a trip to Wake Forest on Tuesday.