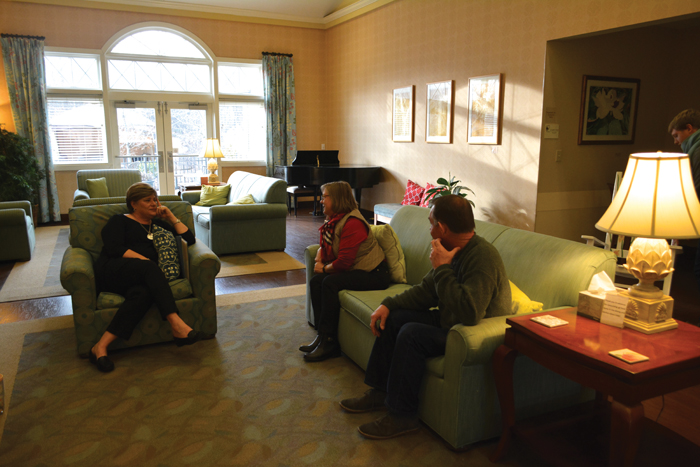 WINSTON-SALEM — On Dec. 20, Mark and Melissa Shue got a call that changed their lives. Their daughter Caroline, 20, had been severely injured in a horrific automobile accident.

The Shues immediately drove to Wake Forest Baptist Medical Center, where they’d spend the next few days shuttling back and forth to Salisbury. On Christmas Eve, they heard about the SECU Family House, and got a referral to move in the next day. Melissa spent 22 nights there, 10 of which were paid for by friends. Mark and Melissa Shue in their room at the SECU Family House. Melissa spent 22 nights there and Mark traveled back and forth to Salisbury.

At this writing, Caroline has been moved to rehab within the hospital, and expected to go home Friday. Melissa was able to commute from home this past week. For the Shues, the Family House was a godsend — their home away from home.

The Family House operates much like the Ronald McDonald House, except that it serves families whose patients are ages 18 and up. The $40 nightly fee goes toward the house’s operations. The rest of its $950,000 annual budget is covered by individual and corporate donations.

The hospitality house had its beginnings back in 2000, when longtime Winston-Salem residents Beth and Sandy Baldwin lost their 26-year-old son to melanoma. Having stayed at a hospitality house in Pittsburgh, they decided to create a place for families to stay while their loved ones were at Baptist or Forsyth Medical Center. Until that point, churches had provided host homes. The house mirrors the hospitals’ service areas — outside Forsyth County — serving 94 of North Carolina’s 100 counties and 38 states.

The $5 million, 45-bedrooom facility opened in 2011, and received a $2 million donation from the State Employees Credit Union Foundation — thus the name. The credit union continues to support the house through volunteer hours, wish list drives, and providing meals to families. The house also received $1 million from the Richard J. Reynolds III and Marie M. Reynolds Foundation. The independent, non-profit facility operates at about 86 percent occupancy, says Kathy Carr, the executive director. An average stay for families is five nights, and the limit is 28 days, Kathy says, although they do work with families who sometimes need to stay longer.

“Part of our mission is to providing lodging and supportive care,” Kathy says.

Think of the Family House as a cross between a nice hotel and a dorm. There’s a communal kitchen, where groups often come in to provide the evening meal. There’s a spacious living room downstairs, a laundry room and library on the third floor, and a game room on the second floor. It’s a clean, quiet, and welcoming place.

We get great feedback from families,” Kathy says. “We’re the welcome mat to our neighbors. Until you experience a crisis, you don’t realize how important food and shelter are.”

“The staff is so kind and courteous and compassionate,” Mark says. “It’s just been a great experience.”

“There’s a consistent, soft love that permeates this place,” Melissa says. “The staff has the ability to make us laugh, and that’s a valuable commodity right now.”

Melissa herself is a part of the non-profit community in Salisbury, so she especially appreciates the efforts of the Family House. Melissa is prevention and education coordinator at Prevent Child Abuse Rowan, while Mark works for Carolina Caterpillar. Melissa has been on leave from her job, while Mark has been able to work from home. Both are extremely grateful to their employers. No matter where they are, Mark and Melissa reach out to others, and their stay at the Family House has been no different.

“You learn something from every family,” Melissa says. “We share a common thread. We’re all in crisis. People are caring and sharing.” A group from Summit Church in Kernersville prepares a recent dinner at the SECU Family House.

“We are praying for each other,” Mark adds.

“We are a non-denominational, safe place to share faith,” Kathy notes.

Now that they’ve experienced it first-hand, the Shues want others to know about he Family House.

“We want to let people know there’s a need for home-cooked meals, and for things such as sample shampoos and soaps,” Melissa says.

Anything that’s donated, Kathy says, helps the bottom line. For example, she says, “You can imagine how many rolls of toilet paper we go through with 45 bathrooms.”

Indeed, there was a recent collection to “TP the Family House.”

For families who can’t afford the $40 nightly rate, there is a family assistance fund, Kathy says. “We work within the federal poverty guidelines, and everybody pays something.”

The Family House has a great relationship in the community with corporations and churches, Kathy says. “Our families need respite and rest, and we provide that. We stand with caregivers.”

“You don’t know how much you’re loved and cared for until a tragedy happens,” Melissa says. “We are just so humbled with the love and genuine concern people have shown.”

While their daughter continues to heal, Mark makes frequent trips to Salisbury to care for their son, Graham, 9, who’s been spending time with family members for the past few weeks. Their older daughter, Anna, 22, lives in Stanly County, where she attends Stanly Community College, and volunteers at a rest home and a horse farm.

After Caroline’s discharge, the Shues plan to maintain a connection with the Family House.

“This is a perfect place for outreach ministry,” Melissa says. “There are so many things we can do to help people in crisis.”