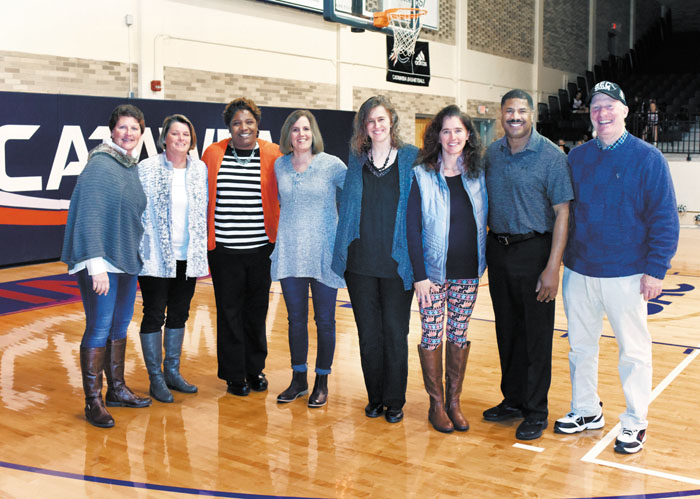 SALISBURY — You know it was a special team when the turning point of the season was a loss.

Catawba honored its 1992-93 women’s basketball team, the program’s first modern-day great squad, on Saturday with a luncheon and with recognition at halftime of a romp over Lincoln Memorial. This is the 25th anniversary of that team’s charge to South Atlantic Conference and District 26 championships, Those ladies (24-9) won six tension-filled tournament games in a span of seven days and appeared in the National Association of Intercollegiate Athletics (NAIA) tournament on March 4, 1993.

A mad march through February began after an exasperating setback at Presbyterian, recalls coach Gary Peters.

“We went down there, played our butts off and didn’t get a call all night,” Peters said. “I got a technical. We lost in two overtimes, and we sat in that locker room a long time. By the time we left the locker room, they’d turned the lights off. It was a game we should never have lost. We were better than PC. But the great thing about that Catawba team is I could see the girls were just as ticked off about losing that game as I was. They cared. They really cared, and when you care that much about each other, you have a chance to do something special.”

That loss would lead to 11 straight Catawba wins.  The Indians refused to feel the sting of losing again.

“It was at about that time of year when everybody has nagging injuries, when everyone is tired,” Peters said. “But we were in it together.”

It was an unusual team for a lot of reasons.

One of Peters’ players was his wife, Amy Price-Peters. She was the team’s defensive stopper, cat-quick and a multi-sport athlete who is in the Catawba Hall of Fame. Catawba also had one of the finest scorers in school history in Angela Harbour (Mayfield), now the basketball coach at Mount Airy High, and Stephanie McCormick, one of the best rebounders in program history and now head coach at Western Carolina University. Monte Jackson (Turner), another two-sport star who played on that team is in the Catawba Hall of Fame, as are Mayfield and McCormick.

Selena Wilkes Tory is also in the Catawba Hall of Fame mostly for volleyball and softball, but she also was a member of that special basketball team. Other standouts included Tammy McIntyre, one of the smartest players in program history,and Shawna Pittman, a deadly 3-point shooter.

Little wonder that those Indians are still the highest-scoring team in program history. They averaged 81 points per game. Harbour was the leading scorer in the league in the regular season, averaging 19.4 points per game.

Despite the winning streak that began after the loss at PC, Catawba was seeded third for the SAC tournament.

In the tournament semifinals at Gardner-Webb, Catawba won a thriller against Carson-Newman, 88-84, to set the stage for an epic championship game against Wingate. When Catawba came from 15 points down to beat the Bulldogs, Peters told The Post it felt like getting ice cream — and the fudge sundae — at Shoney’s.

Peters’ team gave him a Gatorade bath for that win, a rarity for indoor sports.

Catawba already had exceeded all expectations outside the program when the District 26 tournament began. Harbour scored 20 as Catawba pummeled High Point in the first round. In the second round, Catawba prevailed at strong Lees-McRae in what was considered a major upset, 88-80.

The win Peters remembers with the most fondness is the District 26 championship game, played in Catawba’s Goodman Gym against Carson-Newman.

“Carson-Newman had a great All-American post player in Leah Jackson,” Peters said. “Jackson was 6-foot-2, but we put a 5-7 guard on her who was lightning-quick, and she harrassed her all night.”

That guard was Peters’ wife.

Catawba had a small lead late in that contest, a slim edge that wiggled between two and five points the final 10 minutes. With 1:45 left, with McCormick fouled out, and with Catawba clinging to a four-point lead, reserve Angela Grubbs (Waddell) hit one of the bolder shots in the gym’s history, a right-wing 3-pointer that stretched the lead to seven.

“We weren’t shooting well at all and Angie was struggling with her shot,” Peters said. “When she took that one, I couldn’t believe it. When she made it, I turned to (assistant coach Ernie) Purnsley and said, ‘I think we’re going to be all right.'”

The next stop was Jackson, Tenn., for the NAIA tournament.

Of all teams to be matched up with in the first round, Catawba drew perennial national champion Wayland Baptist, a Texas program known as the “Flying Queens.” In those days, Wayland Baptist was the flagship program for small-college women’s basketball. At one point in its proud history, Wayland had won 131 games in a row.

It’s also about 550 miles from Salisbury to Jackson, Tenn., and the Indians had to spend considerable time on the road.

“Our girls played their hearts out against the Queens,” said Peters, smiling at the memory.

Catawba was only down 35-31 at the half. The game got away when Catawba turned it over three straight times to open the second half, and the Flying Queens turned those mistakes into buckets. Catawba wound up losing by 17 points. Harbour, MVP of the conference and district tournaments, scored 17, but shot 6-for-23, Pittman made three 3-pointers and scored 16, but McIntyre was held scoreless by taller defenders.

After 153 wins in six seasons as Catawba’s coach, Peters moved on to Western Carolina. He coached there four seasons, with McCormick as his assistant.

After that, Peters reluctantly exited the coaching world  for administration. Twice as much money and fewer hours, and he had a family to consider.

“But I always loved coaching and missed coaching,” Peters said.

Peters now coaches a middle school team in the town where he lives — Lagrange, Ga. That’s how much he loves coaching.

Peters has only gotten back to Salisbury a a few times over the years, for Catawba Hall of Fame inductions of women who played for him.

But he was back in the gym Saturday, and the memories of the 1992-93 Indians came flooding back.

“That wasn’t a big team, but they were feisty,” he said. “They were special.”