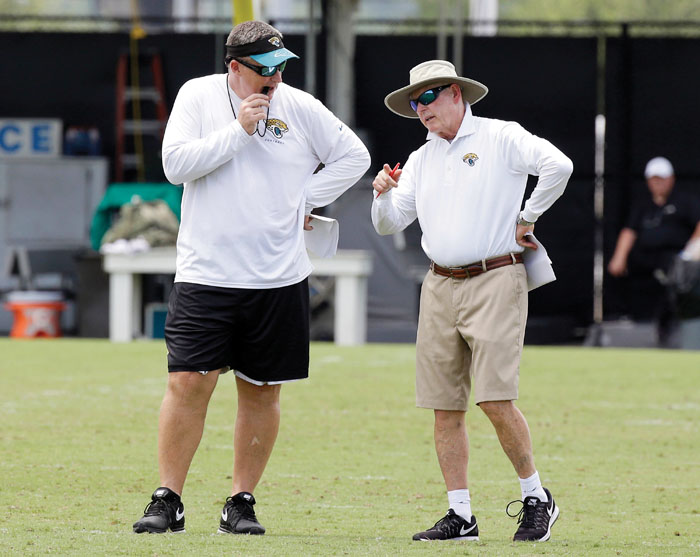 CORRECTS THAT COUGHLIN IS 71-YEARS-OLD, AND NOT 70 - FILE - In this July 28, 2017, file photo, Jacksonville Jaguars head coach Doug Marrone, left, talks with Tom Coughlin, right, executive vice president of football operations, during NFL football training camp, in Jacksonville, Fla. The 71-year-old executive VP of football operations started this franchise in 1995, working from an office in a trailer outside the stadium then known as the Gator Bowl. He was the head coach and the One Voice who made every decision _ from who threw the passes to who ran the calculator for the salary cap to what color the paint was on the walls. (AP Photo/John Raoux, File)

By Mark Long and Eddie Pells

JACKSONVILLE, Fla. (AP) — It’s no exaggeration to say Tom Coughlin built the Jaguars from the ground up.

It’s also no exaggeration to say Coughlin’s last piece of unfinished business would be bringing a Super Bowl title to the town he helped put on the NFL map.

Fifteen years after being unceremoniously booted by the franchise he shaped, Coughlin is back in the front office, where he has helped guide the team in one of the league’s smallest markets to within two wins of the championship he came oh-so close to the first time around.

The 71-year-old executive VP of football operations started this franchise in 1995, working from an office in a trailer outside the stadium then known as the Gator Bowl. He was the head coach and the one voice who made every decision — from who threw the passes to who ran the calculator for the salary cap to what color paint was on the walls.

Denied not once, but twice, in the AFC title game where the Jaguars find themselves again this week, Coughlin chased the final pieces of the puzzle too hard. He wrecked the salary cap and left Jacksonville with the reputation of a man who had few equals on the sideline but lots of flaws in the front office.

Now, with two Super Bowl rings from New York as a coach in his back pocket, Coughlin is working his magic this time from that same front office. He has shown no interest in coaching and has sought zero attention this season, and especially this week, as the Jaguars get ready to play at New England in the AFC championship game Sunday — 21 years after Coughlin took them to the same place for the same stakes in only their second year of existence.

He may be deflecting the credit, but anyone who knows Coughlin knows what this means.

“He was the architect who built this thing, and he had his hands in every aspect of it,” said Tony Boselli, the Hall of Fame finalist who was the team’s first draft pick. “Knowing him and as competitive as he, I think he would love (it). It would be a really special, and almost a finishing of what he started back in 1995.”

Of course, there are no regrets about the 12 years Coughlin spent with the Giants in between these jobs in Jacksonville. The league changed, and Coughlin changed with it. He shed the reputation of the unbending taskmaster (though clocks are still set 5 minutes ahead), dealt less with off-the-field decisions and more with the X’s and O’s, and won two Super Bowls, both against the Patriots, both as an underdog.

Coughlin’s mastery of the Patriots and Bill Belichick, with whom he worked as an assistant coach under Bill Parcells back in the day, has been no small part of the conversation this week. But if Coughlin will be calling any shots on game day — or has been at any point this season — nobody is the wiser. Doug Marrone is the head coach, although Coughlin is always around.

“I don’t think I can lean on him anymore because I’m a big guy,” Marrone said, only half-joking.

To focus on Coughlin this week is to focus on how he transformed this roster and made sure the franchise, in owner Shad Khan’s words , no longer “lacked football IQ.’” The smarter look helped push a team that fired its coach and went 3-13 in 2016 to within a game of the Super Bowl for the first time since January 2000.

Coughlin was instrumental in signing the best free-agent class in franchise history. All-Pro defensive lineman Calais Campbell ranked second in the NFL with a team-record 14 ½ sacks, making him the most impactful free agent in 2017. Cornerback A.J. Bouye and safety Barry Church helped make Jacksonville’s secondary the best in the league.

Top pick Leonard Fournette and second-rounder Cam Robinson, both college stars from NFL factories, reinforced the team’s new identity as a tough, physical group that expects to win every game.

All those moves allowed the Jaguars to win around quarterback Blake Bortles, who has been dreadful at times and efficient at best, and a beneficiary of a defense that looks like a monster. The unit ranked second in points, yards, sacks and takeaways.

“One of Tom’s greatest skills is making people believe they can do more than they think is possible, work harder than they thought they could and achieve more than they ever imagined,” said Brian Sexton, the longtime radio voice of the team and one of the handful of people who have been with the team since its inception.

In many ways, this season’s roster successes have mirrored those Coughlin produced during his first few years, when it seemed like he couldn’t miss.

Though it wasn’t a sexy pick, he declared Boselli would serve as the franchise’s cornerstone at left tackle. He went all-in with a little-known Packers backup quarterback named Mark Brunell and found receivers Keenan McCardell and Jimmy Smith in the bargain bin.

The upset over the Broncos and John Elway in the 1996 playoffs is part of NFL lore, but coming up short that year — then again in 1999 after a 14-2 season — sowed the seeds of Coughlin’s undoing.

Hardy Nickerson, Bryce Paup and troubled receiver R.J. Soward were among the players for whom he overpaid or overreached. The Jaguars became a well-coached but cap-strapped and talent-deficient franchise that kept games close, but went 19-29 from 2000-02. (Exhibit A: They had a plus-12 turnover differential in Coughlin’s last season yet finished 6-10.)

There was only one person to blame for that roster: Coughlin. The owner who fired him, Wayne Weaver, enjoyed only one more playoff win before selling the team in 2011. He later said getting rid of Coughlin was one of his biggest regrets.

After a few months to reflect following his firing, Coughlin conceded it still stung. In an interview with The Associated Press, he said, “What if I had left after five years, just walked away? But I felt that was my team. I really did.”

Fifteen years later, it is once again.