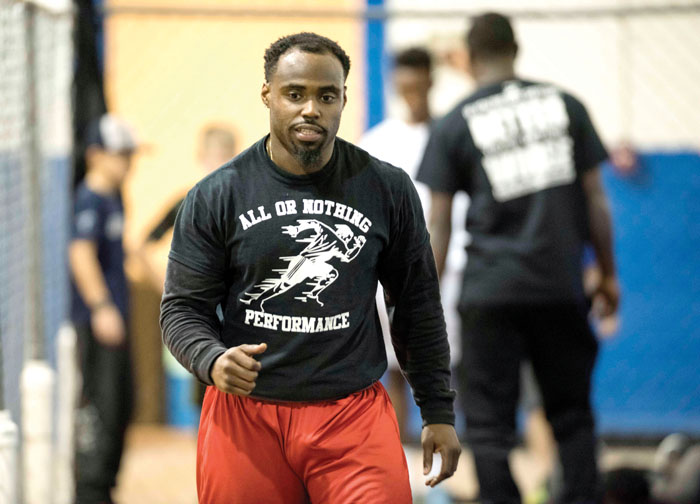 If he’d landed in the right place at the right time, he might be in the NFL  now, along with his friends — Chris Smith (Cincinnati Bengals) and Javon Hargrave (Pittsburgh Steelers). That wasn’t to be, but Parks, who still would get votes as the greatest high school football player of all-time in Rowan County, is OK with that.

Parks has found his new passion in Cleveland, less than five miles from the West Rowan High football field in Mount Ulla, a place that his churning legs and limitless heart transformed into a magical playground every autumn from 2006 until 2009.

“I always knew that at some point in my life, I’d be working with kids, training kids, helping kids become better athletes and better people,” Parks said. “I just didn’t know it would happen this fast. I didn’t know I’d be doing this so young. But the opportunity came, and I’m not going to pass it up. It’s time to get a new career started.”

Parks’s new venture is an enterprise called All or Nothing Performance. He’s an instructor and a trainer, and he’s going to be the coach of a youth football travel team this spring.

Parks is not in this alone. John Knox, a multi-sport athlete who quarterbacked Salisbury High to the 2010 2AA state championship, started at three different positions at Division II Charleston and shined in professional football in Sweden, is also an instructor with All or Nothing Performance.

Parks and Knox are conducting clinics and individual and group workouts through the facilities of Defenders Sports Academy in Cleveland. Rob Ramsay, one of the four owners and the athletic director of DSA, said the academy’s first travel football teams will be in partnership with All or Nothing Performance. Parks holds the title of director of football operations for the academy and will lead the effort to choose, organize, train and coach the teams.

Defenders Sports Academy had success in 2017 with travel baseball programs. Softball is in place now. Football and soccer will be next. Beach volleyball is in the planning stages.

Defenders Sports Academy is located on Main Street in Cleveland. It has a rich history, as R.A. Clement School and the old West Rowan Middle. Later, it was the home of the West Rowan YMCA for many years. DSA shares the facility with the ForceTec-Force Tactical Engagement Center, but there’s plenty of room, plenty of space and plenty of acreage for  sports fields to be upgraded, expanded or created from scratch.

Ramsay retired from the Air Force as a relatively young man and envisions Defenders Sports Academy becoming a sports center for the county. It’s definitely a work in progress, but he’s thrilled with the strides made since he came on board last summer. There are indoor batting cages and a fine basketball court, and the facility has both heat and air conditioning.

A wide scope of activities is on the academy’s planned menu, everything from yoga to tumbling to SAT training to mixed martial arts.

“This is about creating opportunities for kids and it’s about us giving something back to the community and back to Rowan County,” Ramsay said. “The goal is to have such a variety of activities available here that when a family drives up, everyone gets out of the car. That’s the new model. Something for everybody.”

Parks’ name brings instant credibility to the Defenders Sports Academy football program as well as to the speed and agility classes that he instructs.

Before Parks arrived in the West Rowan High backfield in the fall of 2006, the Post carefully maintained a fairly short list of all the 200-yard rushing games in county history.

Parks stretched that list considerably. By the time he was done in 2009, with 30 straight victories on the ledger and two state championship rings on the fingers of his teammates and coaches, the 200-yard outing in Rowan County was no longer unusual. Carrying the ball for coach Scott Young as a senior, Parks averaged 237 rushing yards per game. On his better than average nights, he had 274 yards, 292, 356.

Parks’ final numbers at West were so unearthly, so previously unimaginable, that they crushed everything before him in county history and set the bar staggeringly high for all who have followed and all who will follow. There were 1,325 carries, 10,915 rushing yards, 154 rushing touchdowns, 158 total TDs and 8.2 yards per carry over a consistently devastating, 57-game varsity career.

Parks was Offensive MVP of the Shrine Bowl and the MVP of the Offense-Defense All-American Bowl in Myrtle Beach, S.C.

Parks went on from there to do fine things in his five years at the University of Virginia. He had to redshirt, which was humbling, but he handled it with grace. Eventually he rushed 728 times for 3,219 yards, caught 103 passes for 779 yards and put the ball in the end zone 33 times to rank sixth in Virginia history. He served as team captain and earned a degree. No matter what he did it wasn’t going to live up the expectations of fans who witnessed his glory days in high school, but he did plenty.

Parks isn’t big and didn’t possess blazing speed in the 40-yard dash, so he wasn’t drafted by the NFL. Nor was he invited to an NFL camp. When he finally did get drafted, it was by a start-up league called Major League Football, but that organization was put on hold for a year, and then it disappeared.

Parks finally got a chance to play professionally in 2017. He signed a contract with the Cologne Crocodiles of the German Football League. Parks reported in March  for a long season. Opening day was in April. The season didn’t end for the Crocodiles until September. Parks was on a below average team, but it was no surprise that he was one of the league’s best players. The Germans called him “Little Hulk.” He rushed for 1,502 yards in 13 games. He caught 25 passes for 268 yards. He had 339 yards on 12 kickoff returns, including an 82-yard return.  He was second in the league with 115.5 rushing yards per game and fourth in scoring with 18 touchdowns.

“The competition in Germany was up and down,” Parks said. “Teams were really good or not good at all. There was a limit of four Americans per team, and I’d say the best teams were like a good FCS college team in the states. The best thing is I had the experience of seeing another part of the world, and I came through it all healthy.”

Parks didn’t lug any of his Crocodiles gear home. He was too popular. Fans wanted to buy all this stuff from the team.

Parks could have returned to Germany, as a player/instructor for another season. He also had an offer to try out with a Canadian Football League team. But he believes the most productive thing he can do now is to tackle his career as a trainer.

“When I was over in Germany,  it gave a lot of time to think,” Parks said. “I love football, I’ll always love the game, but time isn’t slowing down any. This is the right time for me to get started with life after football. I’ve learned a lot from being around people who know what they’re talking about, and I know I can help kids. I honestly don’t think Rowan County football is as good now as it used to be. I’d like to do something about that.”

Parks’s first classes at the academy were over the Christmas break.

“He’s been full throttle since then,” Ramsay said. “He’s great with the kids.”

Parks enjoys one-on-one sessions, but he gets his biggest kick out of training groups. That way he can create competition, and competition helps everyone improve faster. His training focus is on explosion, hips and improving core strength.

“And building self-confidence,” Parks added. “When you can get a kid believing they can do it, the sky is the limit.”

Parks hopes to have volunteer help in the months ahead. He’s confident that other high-level athletes from the county will want to get involved.

Life skills and academic skills are as critical as physical skills as far as building athletes. Ramsay said the academy, which has a central location between Salisbury, Statesville, Mooresville and Mocksville, will keep priorities in order.

“We’ve grown a lot in the last six or seven months, but we don’t want to get greedy and try to do too much, too soon,” Ramsay said. “We want to build this right. We want to build something here that’s going to last a long time.”

NOTES: For information on programs, call DSA at 704-209-5033 or visit the website at www.defenderssportsacademy.com. … Softball camps are coming this month. Lead Instructors are Mooresville coach Ally Davis and West Rowan assistant coach Erin Foster. … There is another Defenders Sports Academy in Troutman.